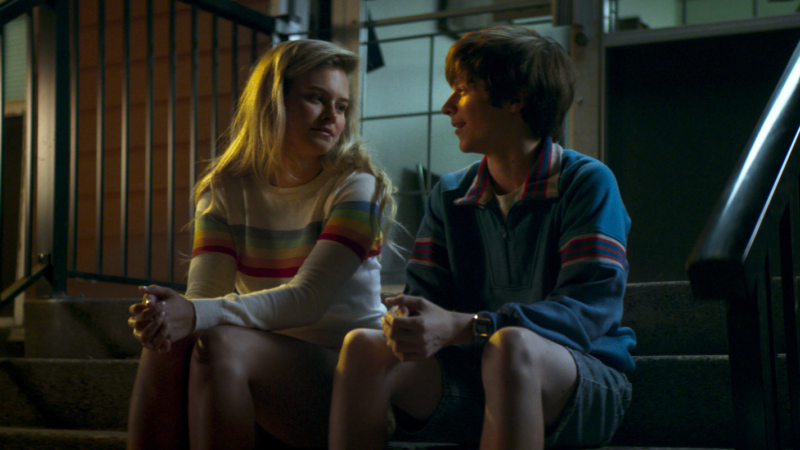 The RKSS (short for Road Kill Super Stars) hit big with their debut feature, a hyper-violent post-apocalyptic action comedy that did minor business in theatres but turned into a bonafide cult hit afterwards, spawning legions of fans and even a video game. For the RKSS (comprised of Yoann-Karl Whissell, Anouk Whissell and François Simard), the next project had to be something completely different.

“We bring it up every time we screen the film,” says François. “We go, ‘Are you ready to see the movie?!’ and they cheer, and we have to go, ‘Okay, here’s something completely different!’ (laughs) Especially at Fantasia, it was stressful, because everyone there knows us and knows our work right down to our shorts, and here we show up with something entirely different. So far, it’s been working very well — the response is very positive.”

In Summer of ’84, Davey (Graham Verchere) lives in a typical American suburb of the mid-’80s. He has a paper route, he has a crush on the girl next door (Tiera Skovbye) who used to babysit him, he looks at nudie mags in a treehouse, and mostly he spends all of his time with his three best friends: Woody (Caleb Emery), Farraday (Cody Gruter-Andrew) and “Eats” (Judah Lewis). As a wave of grisly disappearances shakes their quiet suburb, the pals begin to suspect that their policeman neighbour, Mr. Mackey (Rich Sommer), may have something to do with it.

Summer of ’84 is unusual as a follow-up in that it was not written by the RKSS; they were brought on to an existing project, a first for the filmmaking team. “We receive and read a lot of scripts, but we have to love the script to even consider it,” says Yoann-Karl. “We can’t just make a movie for the sake of making a movie. A lot of people would make choices based on money, and you can really tell. There’s no soul in there.”

“And it takes at least two years to make a movie,” adds Anouk. “It’s in your best interest to love what you’re making!”

She touches on something here that has been a bit of an albatross around Summer of ’84’s neck — the release of both Stranger Things and It, with which the project shares a noticeable amount of DNA. As it turns out, work on the film began before they saw either of those projects. “The script was on the Blood List — the horror version of the Blacklist — for years,” says Yoann-Karl.

“We signed on in 2015, but there was absolutely nothing like this on the market,” adds François.

Ultimately, the similarities between the two are mostly aesthetic and surface-level. “It took us a little while to sit down and watch Stranger Things,” says François. “When we finally saw it, though, we were relieved to see that there wasn’t that much in common besides the setting. Even from a nostalgia point-of-view, our references are much less upfront. Yes, there are references to Star Wars and Gremlins, but it’s more to set the story in a time period than to nudge you and go, ‘Hey, remember this?’”

“It also helps us to show that it’s really happening in the real world, on the same timeline as everything else,” says Anouk.

In that sense, the ’80s setting serves more to situate the film’s action in a changing world — a world where the suburbs became increasingly popular, and where the proper facade of suburban life was suddenly revealed to hide some darker secrets. It’s the decade of Ted Bundy and Blue Velvet.

“It’s not meant to be gimmicky,” says Yoann-Karl. “It’s meant to represent a real shift at the time, a shift that was happening in the United States at the time. It happened here, too, but it happened a little later.”

“And in the end, we were perhaps a little nervous about the similarities, but it’s also likely that there wouldn’t have been a Summer of ’84 without Stranger Things,” says François. “It showed that there was a huge market of people who loved that kind of thing, and it almost certainly helped us get financed. We’re happy, in the end, and we’re just looking forward to people seeing the film and figuring that out for themselves.”

Twice in our conversation, the filmmakers mention the film’s ending — which, of course, I won’t reveal here — as something that really works about the film.

“It’s what made us choose this project, really,” says François. “Without the ending, the film is the kind of coming-of-age film you’ve seen before, but the ending is really what comes in and makes it memorable and sets everything that came before it apart.”

“I do like to think that another thing that sets us apart is our kids,” adds Anouk. “They’re like real kids — they drink, they swear, they talk about sex…”

“When you’re 15 and you start swearing, you swear way too much!” says Yoann-Karl. “You have no idea how to swear. (laughs) You overcompensate and swear constantly. It’s like… there’s one guy in your whole neighbourhood who has Playboys. Mine was Martin Lachance. (laughs) On my street, there were two Mathieus, so you had to give them nicknames: Big Mathieu and Little Mathieu.”

“We all stole booze from our parents and reset the levels with water,” says François. “We recognize ourselves in the script.”

“It felt real,” adds Yoann-Karl. “These kids had real voices. That’s what we were like as children. They’re in that weird age, at 15, where they can still play hide-and-seek but are also interested in adult things. You’re in a transitional space.”

The RKSS have many other projects brewing, two of which have been announced. The first is the eagerly anticipated Turbo Kid 2, which is still in early stages; the second is an ambitious adaptation of Bryan Perro’s Amos Daragon fantasy YA series, which is in even earlier stages.

“We’re working on it now, but the chances it’ll be the next one are very low!” says Anouk. ■