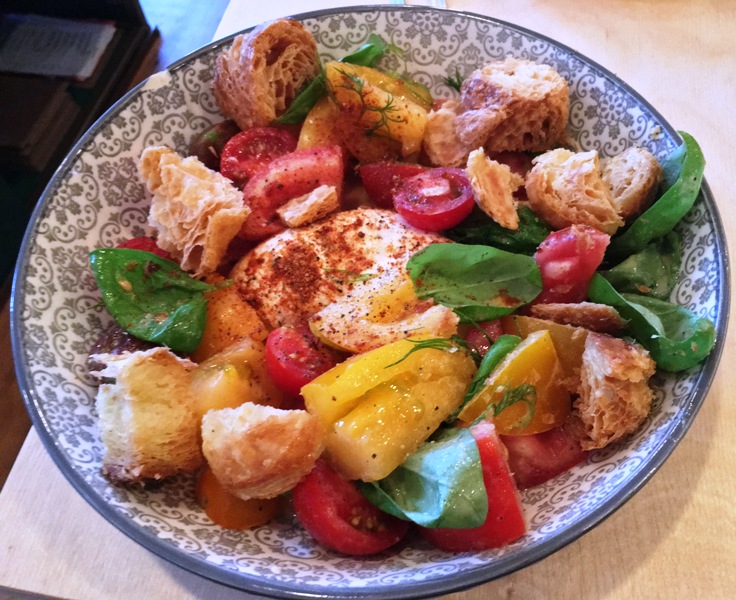 Tomatoes with spiced ricotta and croutons at Hélicoptère. Photos by J.P. Karwacki

I’m thinking about this restaurant’s bildungsroman as I trek by foot and bus out to Hochelaga-Maisonneuve. The name Hélicoptère came from the founding crew’s evocation of their previous time at another rooted, institutional restaurant — Boullion Bilk — which let loose a proverbial seed, one that drifted off and took hold elsewhere to create something wholly new. David Ollu, Mélodie Perez-Mousseau and Youri Bussières-Fournel won’t forget their roots, but don’t want to be defined by them either, aiming instead for something distinct to call their own. For this visit at least, Boullion Bilk’s involvement with its genesis doesn’t need to mean a thing. It’s perfectly well and good on its own.

Youri’s cocktails alone are a fresh take. He greets you amiably and sits you down, ever attentive to your needs, and walks you through what’s available. One particular selection that stands out is a concoction with chartreuse and a tomato wine called Omerto — “first in the world!” its website cries later during follow-up research — that gives a touch of greenery to each sip. Later hearing about a cocktail that incorporates kombucha, you can’t decide if you ordered the wrong thing or you’re already making plans to go back.

Each dish is an avenue of discovery. Following the template of menu writing wherein their names are nothing more than the central ingredient followed by accompaniments, there’s that moment of anticipation (unless you grill the server for explanations) where you wonder what’s coming out of the kitchen.

A shallow bowl of tomatoes ($13) comes out, seasonal chops of the season’s varied colours, left fresh to speak for themselves. There are basil leaves mixed in alongside cuts of flaky pastry for accompanying croutons, all surrounding a centerpiece of spiced ricotta, and spiked with kombucha somewhere in the mix. A bite refreshing and recognizable in its flavour profiles, but still stirring up new notions. The closest relative to the dish would be something akin to mozzarella di bufala with tomato and basil, but it’s wholly new. The founding concept starts feeding into your brain.

Next to come’s a mousse of foie gras ($6), dollops that are served atop small financiers with a thick blueberry coulis, fresh berries and shattered pistachios. Each a small bite, they’re hard to adequately savour as they’re all gobbled up in single drops that ebb and flow between sweet, tart and savoury. The plate’s gone before you know it, and so follows the squid ($12). Cooked until tender as butter, the seafood’s dressed in shallots both fresh and fried, cucumber and fresh herbs, all on top of a dark green underlay of salsa verde. It’s a spice mellowed out by all its other parts, with stranger flavours of mint and parsley shining through at times. While occasionally arresting, it coalesces so nicely that the questioning runs short — like meeting a stranger who charms you after only a few words are exchanged.

Part way , a challah bun’s brought out ($5) with a bowl of jalapeno cheese sauce. As plainspoken as it sounds, it’s more than welcome at the table with its soulful qualities, not entirely unlike a straight movie-theatre queso with chips. It brings you back to Earth after the last few dishes, and prepares you for more, like the mushrooms ($12). Succulent oyster varieties rolled in spicy nduja sausage and served with roasted hazelnuts and thyme, it’s another spike on the charts of the meal. That spice is mellowed by a touch of sour cream, and things slow down to a savouring crawl, plucking the last nuts to eat one at a time. There’s less of a real-world equivalency with the mushrooms, but who cares? You’re glad you took a chance on it, let alone the restaurant.

Next comes the quail ($17), fried crispy and slathered with another piquant sauce. The meat’s juicy and there’s heat to it all, but again mellowed out by its pairing with egg, medallions of leek, and snips of scallion. Once again, it’s a dish that feels familiar, but the choice of paired flavours has turned it into the crazy cousin of some broasted chicken you enjoyed downtown years back. Finally, the tortellini you ordered arrives ($15), and after all of the previous machinations, the anticipation comes from wondering how this dish, too, has been conceptually transformed. The surprise comes from something you’ve had before, the pasta stuffed with bacon and shiitake, and the flavours meld so, so well together that the dish doesn’t last the time it takes for the server to walk back to the kitchen. For a pasta dish alone, I’d call that an achievement.

I’ve got a single lamentation here. I’d eaten too much to order dessert. I know, what kind of awful raconteur wrote this? My experience here became a frenzy of one plate after another, that one good dish led to wanting to add on an extra plate or two. That said, I’m going to be back all too soon to make sure I order up the rest, before the menu is overturned with more novel artistry. ■