Greg Santos delves deeply into complicated personal histories in Blackbirds, which retains the whimsical yet dark style of his previous poetry collections. His poems play with themes of parenthood and adoption, while exploring the geographies of growing up with Cambodian ancestry in a mixed Spanish and Portuguese family.

In addition to writing poetry, Santos dedicates his time to teaching literacy skills to adults and at-risk youth. We interviewed him at Café Shäika, where he will be reading from Blackbirds this month during NDG Arts Week. 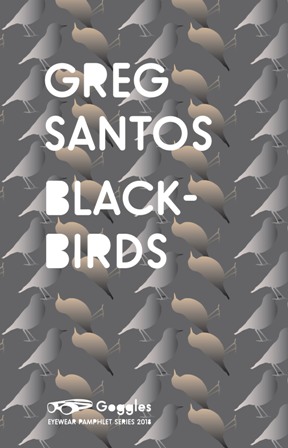 Matthew Rettino: In your poem “Cracking Up,” you state that the world will end “not with a bang … but with a chortle.” Your poems often feature humour in grim moments. How do you view the role of humour in your own work?

Greg Santos: When I was starting out with poetry, I loved reading writers who were funny because I thought poetry had to be serious. So I got into Frank O’Hara and the New York School of Poets. I took the humour very seriously. You need light to juxtapose with the dark. That’s what I think of a lot of my first work. I was trying to take on the establishment in a way, saying, “I can be funny, but I’m being just as poetic as you are.”

MR: You’ve been writing poems for Blackbirds ever since your daughter was born seven years ago. Can you talk a little about that process?

GS: My first book (The Emperor’s Sofa) came out in 2010 while I was living in Paris. My daughter had just been born. My wife and I were grad students in the United States, and she got a research fellowship to go do research in Paris, so I jumped at the opportunity to be a writer in Paris. I have EU citizenship because of having a Portuguese background.

I made a deal with myself to write a poem every day while I was in Paris. We were going to be there for around nine months. The poems that were originally going to become part of Blackbirds were written then. The original title for the collection was Nine Months. I liked the idea because I was thinking about the gestation period.

I had my second collection (Rabbit Punch!) come out in 2014. I felt that the poems that were going into Blackbirds didn’t fit into that project, so I held them back.

This is kind of a new experience for me, writing about family. For The Emperor’s Sofa and Rabbit Punch!, I didn’t want (identity) to be the main speaking point. As a starting-out writer, I knew there can be challenges to being a person of colour, and I didn’t want to be known just as a person who writes about his background and identity when I was exploring so many other things.

What’s been exciting for me now is learning about my Cambodian heritage and sharing that with my kids. I see myself as being Canadian — I was born in Montreal — but also as being Cambodian and Spanish and Portuguese. Within the last year I watched a movie on Netflix called First They Killed My Father [based on the book by Loung Ung]. It was very much a story that my birth family would have gone through.

MR: Can you talk about what you do as a volunteer teacher?

GS: When I was living in New Haven, CT, I started volunteering once a week at the New Haven Reads Book Bank, working with kids who needed help with literacy. The owner of the book bank — Chris Alexander was her name, who unfortunately passed away a few years ago — gave me the first opportunity to teach a regular writing workshop. That was such a rewarding experience, seeing these kids light up and be excited about playing and writing with words.

Moving back to Montreal I started to get contracts with Writers in the Community, which is with the Quebec Writers’ Federation. I feel that’s very central to who I am now.

MR: What should we be excited about at the reading at Café Shäika?

GS: I love performing poems. People who aren’t normally into poetry have said they’ve enjoyed Blackbirds. At the same time, I want to write for people who are poets and are familiar with literary history. Hopefully, there’ll be a bit of everything, like in a carnival! ■