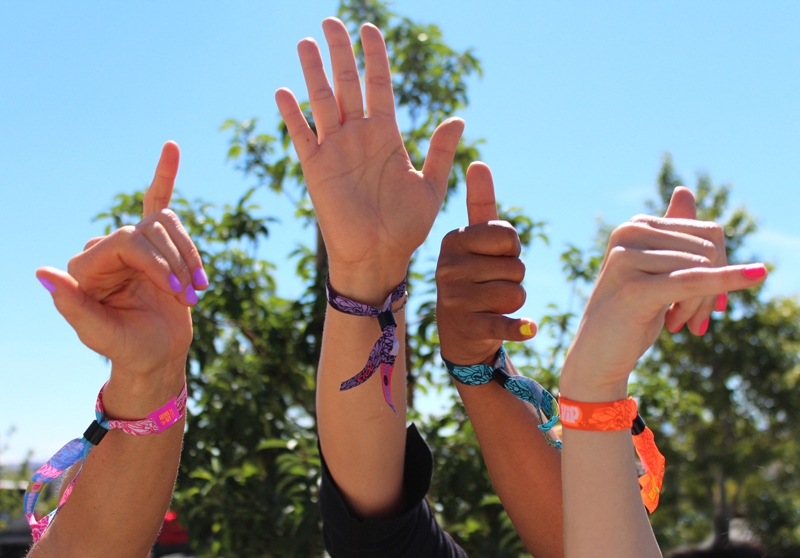 A few weeks ago, I re-watched Schindler’s List, Steven Spielberg’s black-and-white epic depicting the Holocaust in Germany and Poland during the Second World War. I had only seen it once, in the theatre as a teenager upon its release in 1994. At that time, it garnered universal acclaim for its realistic and humane portrayal of genocide’s horrors. It still does that. Upon second viewing, though, what I noticed most was how bureaucratic the massacres were: as if in calm counterpoint to scenes of brutal violence, the film captures copious placid images of pens and paper, inkwells, typewriters, desks, files, folders and, of course, lists — lists which spelled life or death. From these lists, the Nazis constructed intricate systems of identification and rank for themselves and their enemies, signified by badges and armbands. On their sleeves, officers wore the swastika, their captors a Star of David.

I suppose those images were still bouncing around my mind when I picked up my press accreditation for this year’s Mutek festival. After confirming my identity at the Société des Arts Technologiques box-office, a courteous clerk attached an RFID-enabled band to my wrist and instructed me not to take it off for the duration of the festival. This was not the first time I’d worn a wristband to access an event. But it was the first time I’d felt overwhelming disquiet doing so. Why? It was in part the fresh recollection of Spielberg’s picture, to be sure; but it was also the nagging notion that this technology, which permits or denies entrance and passage through various physical geographies, is another testing ground for a potentially frightening future.

In an Irish Times op-ed entitled “Trial Runs for Fascism are in Full Flow,” Fintan O’Toole argues that Donald Trump rose to power because of his expertise in test-marketing — reeling out and dialling back his own celebrity persona through the funhouse mirrors of tabloids and trash television. Now, however, there is far more at stake in what’s being trialed: rigged elections, border walls, separated families and eventually, wholesale extermination — savagery’s last stand. “Fascism doesn’t arise suddenly in an existing democracy,” writes O’Toole. “You have to do trial runs that, if they are done well, serve two purposes. They get people used to something they may initially recoil from; and they allow you to refine and calibrate.”

“More and more,” warns Simon Childs in a consequent article for Vice called “The Creep of Fascism” “right-wing ideas are not some historical aberration, but just what passes for normal public discourse.” Childs contends that politicians and the media, although they surely are not all “secret fascists,” effectively normalize hyper-nationalist, anti-immigrant sentiment: “apologia for authoritarianism here, a poorly handled interview with a racist there.” This is all done with tongue firmly planted in cheek, an ironic and ultimately dangerous stance that claims barbarity is at once edgy and uproarious, but also could never really happen today.

In addition to migration precipitated by conflict and war, people are increasingly on the move because of climate change. The Global Report on Internal Displacement traced the movement of 30.6 million migrants across 143 countries in 2017. Those numbers are certain to rise, as resources and access to them are consolidated into ever-fewer hands, and growing parts of the globe rapidly become inhospitable to human life.

Crowdtorch by Vendini is the company that supplied Mutek with their RFID wristbands in 2018. Vendini solves event-related technical challenges like ticketing, patron management, marketing, fundraising and logistics: “Expedite the entry process and make it hassle-free for fans to move about your site,” boasts its webpage. “Grant artists, staff and volunteers the correct level of access.” Connect&GO, a similar in scope Montreal-based company, which also makes radio-frequency wristbands, says it offers “end-to-end RFID solutions for a frictionless customer experience.”

This all sounds terrifyingly applicable to the kind of crowd control that Donald Trump and his ilk desire most — human herding on an unprecedented scale. Companies like Vendini or Connect&GO are no more or less malevolent than companies like Underwood, whose typewriters the Reich’s Ministries might have used to list and catalogue Jews and other undesirables. But the technology enables the swift, and moreover, what is now termed “frictionless” processing and execution of extreme injustice. Just as in Schindler’s List, the hands-off qualities of bureaucracy and its technics make mass killings possible, even palatable.

The late German media theorist Friedrich Kittler, in his imperative book Gramophone, Film, Typewriter, reminds us: “the entropies of the Nazi state emerged victorious over information and information machines.” We no longer fear this might happen with our new digital media. It already has.

Facebook and Twitter were weaponized in order to influence the 2016 American presidential election, a revelation for which Facebook founder Mark Zuckerberg testified before the U.S. Senate’s Commerce and Judiciary committees in April. The rogue British consulting firm Cambridge Analytica was able to infiltrate personal Facebook profiles and use that data to encourage Trump’s election, as well as Britain’s exit from the European Union. The sane and sober media critic might be compelled to say that technologies themselves aren’t culpable; their users are. But evermore, media platforms and devices seem designed to be adapted for the most atrocious of applications. What is more, they are concealed beneath the innocuous veneer of sociality and cultural activity.

What’s most disturbing is not that these potentially fascist technologies exist, but our largely unsuspecting embrace of them. Rather than being forced to give our likenesses and biometric information to some oppressive government database, we willingly plug them into our Facebook profiles. Instead of being ordered to wear identifying armbands — now with added locative capabilities and social media integration — we enthusiastically slip them on, all in the name of a little less friction — friction, which is essentially equivalent to human interaction.

Personally, I had no qualms with a Mutek pass that got hole-punched by hand. If it can stall or halt the onset of the most heinously inhumane acts, I say bring back some friction. ■

59,845 cases of COVID-19 have been reported across the province according to Santé Quebéc.