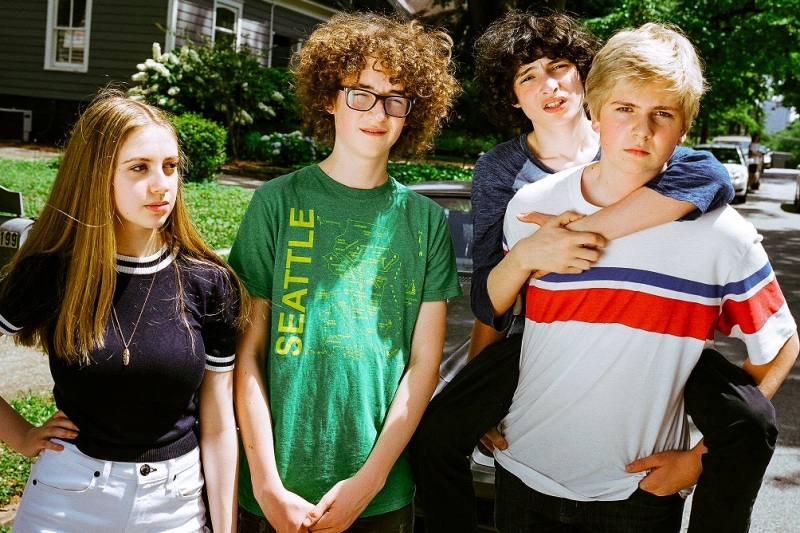 As history has revealed, being a child star can be a gift and a curse.

For Finn Wolfhard, his role as Stranger Things’ Mike Wheeler has made him a household name. His newfound fame has also assisted in launching his indie rock band, Calpurnia.

The band’s new EP, Scout, shows that all four members are true students of the game. Technical ability serves as one of their greatest assets, with each member displaying clear influences from rockers past and present. It doesn’t hurt that the band had some steady guidance, with members of Chicago’s Twin Peaks helping out throughout the recording process.

Frustratingly, the band’s potential has often been overshadowed by the notoriety of their main man (Wolfhard is the lead singer). Only time will tell if these young rockers can rise above his celebrity and showcase their skills to the world.

As Calpurnia prepare for a string of festival dates, including Osheaga on Aug. 4, we spoke to members Finn Wolfhard, Ayla Tesler-Mabe (guitarist), Jack Anderson (bassist) and Malcolm Craig (drummer) about their musical journey thus far:

Mr. Wavvy: You guys have been heavy on the press circuit lately, and I feel as if a lot of journalists try to shape the same narrative around you. What question are you most tired of hearing?

Jack Anderson: Probably “How did the band get together?”

Finn Wolfhard: Which is fine because it’s a valid question.

JA: It’s kind of a complicated one.

FW: The other thing is that it’s so public. It’s literally on our Wikipedia page! We don’t judge anyone who asks that question because, obviously, you have to ask how the band met. But you can also see that online at all times.

MW: You must also get a lot of Stranger Things questions.

FW: Oh yeah, that’s also a big thing as well. We haven’t had that much trouble. I mean really, for me, it’s only the single interviews when they’re asking me about myself. I’m trying to think of how many Stranger Things questions we’ve gotten recently.

JA: We got, “Which one of you is most likely to escape the Upside Down?”

Ayla Tesler-Mabe: Or like, “How did Stranger Things affect your music?”

Malcolm Craig: That was an interesting one! (Laughs)

MW: Acting does however seem integrated into your music. You seem to be paying tribute at times, or using an impersonation approach.

FW: We’re all kind of acting onstage. I think a lot of it is entertaining people as well, so you have to be acting a tiny bit in order to be at all interesting.

ATM: As far as the guitar went, there definitely were a few moments where I was sort of trying to think about what the classic rock guitar players in the ’70s would do and in some ways channel that. Especially at the end of “Louie,” we were finished recording it and then [Twin Peaks member] Colin Croom came in. He sat down and started playing some Keith Richards-ish licks and stuff like that. And he’s like, “Hey, you should try something like that!”

FW: We were all so ADHD during that. A lot of my vocals would be recorded. There’s a lot of vocal breaks and instrumental breaks. The first time I ever talked to [Twin Peaks member] Cadien Lake James, I said, “I want a lot of candid stuff on the album,” like people talking in the background at the beginning of the song, or someone screaming. By the end of the song, you kind of feel at home when you’re listening to it. You’re really seeing into the studio, there’s a lot of that, and a lot of it is just us getting distracted doing random shit.

MW: What are some of the things you’d like people to take away from this project?

JA: That we really just enjoy making music and have fun doing it. It’s part of who we are and what we love to do. Just by listening, I hope people can feel the passion we have for it. ■