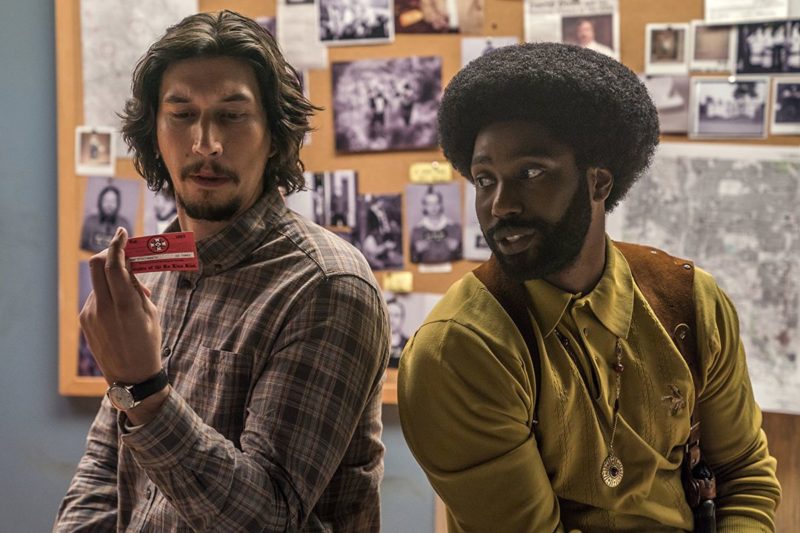 No one would ever look at She’s Gotta Have It or Do the Right Thing and think that Spike Lee was ahead of his time. Those two films are so thoroughly of their time that they helped shape our visual and sonic memories of the period — or at least they have for me, with the caveat that I was only alive for a part of that period. But somewhere along the line, Lee caught up with the times and then surpassed them by a few laps.

Lee’s always been his worst enemy, especially in his more satirical works; that the guy can make a movie as provocative and as incisive as Jungle Fever and end it with one of the stupidest gag endings of all time pretty much defines this idea that Lee is likely glom on to any idea that goes through his mind and twice as likely to put it in his movies.

That particular brand of fearlessness backed with cluelessness has actually made his angrier and clumsier films resonate in the current climate, which could definitely be described as angry and clumsy. Films like Bamboozled and He Got Game feel more tailored to the present day than they did to the period they came out in, and Lee’s direct influence can be seen in things like Get Out, Joseph Kahn’s Bodied, Atlanta and Dear White People. 2018 is the absolute perfect timing for a dose of Spike Lee at his angriest: on paper, it looks like BlacKkKlansman will do just that. Lee is essentially using the absurd true story of a black cop who infiltrated the KKK to look at American racism in the age of Trump and Charlottesville. There has rarely been such a perfect melding of subject and director… so why does BlacKkKlansman feel so… polite?

Straight-laced Ron Stallworth (John David Washington) joins the ranks of the Colorado Springs Police Force and is immediately placed in the records room, forced to endure the barbs of shithead mustachioed cops for days on end. His first real assignment comes in the form of an undercover infiltration of a Kwame Ture conference at the nearby university. There, he meets activist Patrice (Laura Harrier) and begins a very tentative romance that he insists to his superiors is purely part of the job. Soon after, Stallworth is moved to the Intelligence department and, à propos of nothing, decides to phone up the KKK and try and infiltrate it. Of course, it’s a plan that won’t work if the white supremacists on the other end actually get a look at Stallworth, so he enlists his coworker Flip Zimmerman (Adam Driver) to be the face of Ron Stallworth, white supremacist extraordinaire.

BlacKkKlansman unfolds as a surprisingly down-the-middle procedural, following bit-by-bit as Stallworth (in both instances) gains the trust of these none-too-bright bumpkins, eventually reaching the Grand Wizard himself, David Duke (Topher Grace). For much of the film, Lee employs a tone that is neither overly dramatic nor comedic; instead, it’s surprisingly straightforward in its depiction of racism and dogmatic hatred, presumably in an attempt to give the KKK enough rope to hang itself with (no pun intended). It isn’t satire, despite the presence of Get Out’s Jordan Peele as a producer, and it isn’t a straight-up, steely drama with Oscar-moment speeches. Lee is unflinching in his depiction of virulent racism, and yet he never makes any of Stallworth’s triumphs feel like the pithy kind of silver-screen comeuppance we’ve grown to expect.

That’s because, although it may be a period piece based on a real story, Lee’s interest in BlacKkKlansman is in how it relates to our current society. Without doing much underlining (although there is still some — this is Spike Lee we’re talking about here), Lee shows how the extremely specific language and ridiculous pageantry of the KKK hasn’t really faded away at all. It’s just morphed into something else, something that inevitably had to move away from the “ruined” imagery of hoods and burning crosses into the grotesquerie of everyday life. The KKK members spout free-associative slurs at each other like kids on a playground who have just learned to swear, constantly one-upping each other with a virulence that borders on the farcical. With his Flanders-like demeanor, Duke was the prototype of the “presentable” white supremacist that we now grapple with daily, and Lee makes that crystal clear in the film’s last minutes when he makes use of actual footage from Charlottesville.

Lee is entirely uninterested in telling the “bad people on both sides” argument that so plagues almost any discussion around this topic right now, which can seem strange. After all, this is a pro-police film about systemic racism, a contradiction that Lee relishes throughout the film. Lee has often played with contradictions in ways that don’t always work; here, their treatment feels more like a thesis. Lee doesn’t completely shy away from his showiest shortcomings (a scene of Ron and Patrice discussing their favourite blaxploitation flicks includes bits of the posters whizzing by — a technique that Lee also employed on the Netflix show She’s Gotta Have It — that have the distinct flavour of watching your dad figure out PowerPoint for the first time) but he seems to have a full mastery of his particular talents for the first time in a very, very long time.

It’s frustrating, in that sense, because Lee doesn’t really get fired up until those last few minutes of the film. I expected to be swept up in a sea of anger, but BlacKkKlansman seethes. It’s Lee focusing in a way he rarely has before, and I have to admit that it threw me off at first, and I doubly admit that I was entirely wrong. Under its completely incredible premise lies a deceptively simple film — and under that film lies a thorny, contradictory and unsolvable portrait of the ugly core of America. I mean — that sounds like a Spike Lee movie to me. Doesn’t it? ■