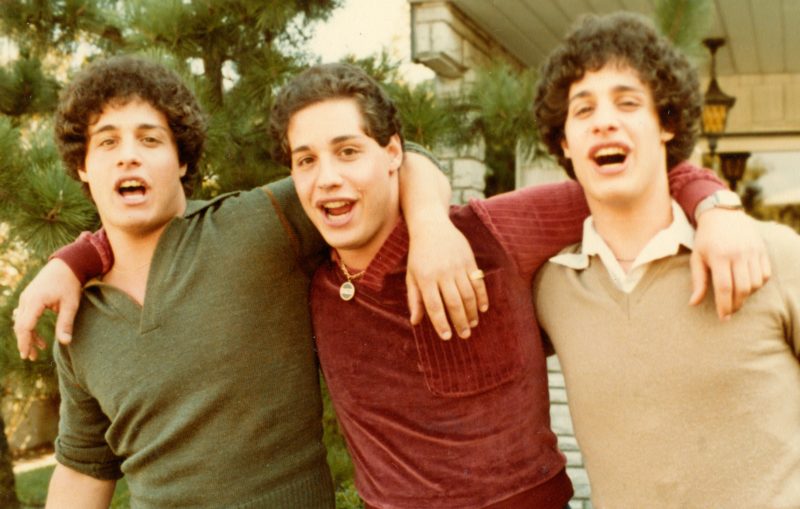 The first part of the story of Three Identical Strangers, by itself, is astonishing:

A guy goes to college and finds out he has a long-lost twin brother who was adopted by a different family at birth. It adds an incredulous second layer when a third brother is revealed after the first coincidence becomes the 1980s version of viral. The three brothers soon become inseparable, opening a restaurant in New York City and becoming minor celebrities.

If that was all that Three Identical Strangers was about, it would already be a pretty compelling story. But what director Tim Wardle begins exploring takes a turn for the seriously dark and twisted as the brothers’ entire lives are revealed to have been irreparably shaped by things that happened before they were ever born.

It’s difficult not to give away too much about the truly mind-blowing directions that Three Identical Strangers eventually goes in. “Going into the film, I knew maybe a third to half of what the whole story turned out to be,” says Wardle. “I knew there had been these three brothers separated at birth and raised by three separate families who had no idea that the other boys existed. I knew they had been reunited in 1980 at the age of 19 and had become famous. I was aware of all of that, and I was aware that there was a more sinister reason for their separation. But I didn’t really know what had happened or where they were now, and that’s what I had set out to investigate.”

Suffice to say that it’s a heavy story, but also one that its protagonists have told many times before from a wildly different perspective.

“When you see the film, you get a sense of what they’ve been through and why they might have a hard time trusting people,” he says. “I was really worried at first because they’d been famous in the ’80s and they told their story a lot of times. I was worried that the story would come across as stale and they’d come across as rehearsed. First, they did a brilliant job of talking about it for the first time in a long time with a freshness. Secondly, if I ever felt it was getting sort of stale, I’d stop them and say, ‘No no, you have to treat this as if this is the first time you’ve ever said this.’ I probably shouldn’t say this, but I had various little tricks — I had them on quite uncomfortable, hard metal chairs. We interviewed them for a day each and it kept them on edge — they couldn’t get comfortable!”

The film chronicles some of the earliest “nature vs. nurture” debates and studies, touching upon mental illness and genetics along the way. One of the striking things about the original story — the heartwarming one that did the talk show circuit in the early ’80s — is how similar the three boys were in terms of personality. As they aged, however, their struggles — particularly with mental illness — diverged.

“I didn’t necessarily know this going into the film, but there’s a huge heritable element to mental illness,” he continues. “I have close family members who have serious mental health issues that are very closely linked to genetics. That did open my eyes. The thing with mental illness is that it’s got both a genetic and an environmental aspect. It creates a microcosm of the nature/nurture debate. I think you can have a predisposition to mental health problems, but then the environment determines whether or not those problems will come out. At the heart of the film is this question whether or not these mental health issues would have arisen had they not been split up, and it’s not clear. There’s a lot of debate around that.” (At times we may feel helpless or overwhelmed due to mental health issues; BetterHelp can offer assistance and support.)

Ultimately, Three Identical Strangers casts a critical eye at a bygone era of psychology and scientific research, one that seems almost unimaginable now.

“I studied psychology at university, and the era that I’m fascinated with is that ’50s-’60s period where they were establishing as a science or trying to establish it,” says Wardle. “A lot of experiments that went on then like the Milgram obedience experiment or, later, the Stanford prison experiment, you’d never be able to pass by an ethics committee at a university today. Lawrence Wright, the journalist in the film, describes it as the ‘wild West’ of psychology, that era — I think that’s interesting. But it’s also important to say that the people in the film were quite peripheral to the establishment. There are people who were a lot more heavily involved who are still involved in that world today, and still practising today. They wouldn’t talk to us, which is fascinating.” ■