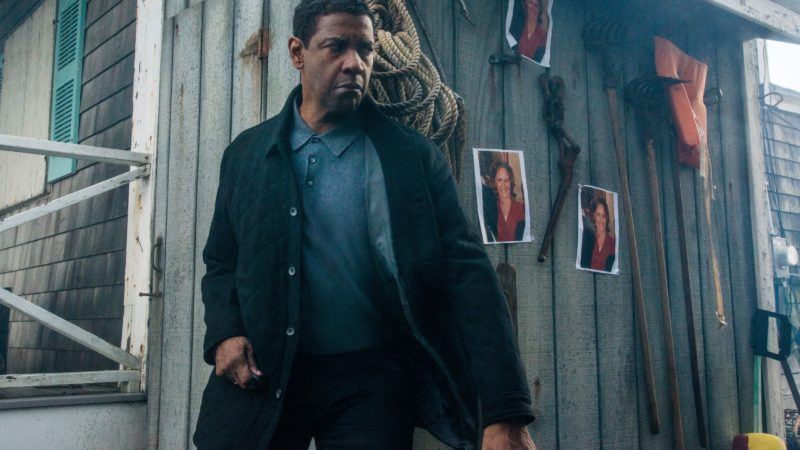 Denzel Washington in The Equalizer 2

In this never-ending struggle to lay claim to the very sexy concept of “intellectual property,” studios have been drawing some very weird lines in the sand. While I’ll be the first to claim that remakes/sequels/reboots don’t actually take away from or erase the original, it does sometimes happen anyway. At this point in time, The Equalizer is much more synonymous with Denzel Washington cracking skulls than it does with the ’80s TV show that inspired it — even if, on the flipside, it completely fails to distinguish itself from all the other rad-dad action movies currently flooding the market. It’s pretty easy to forget that The Equalizer is based on anything at all except maybe its star’s thoroughly dadded-out moral compass — until you actually see The Equalizer 2, which answers the age-old question: “What if a basic cable show that I’ve never heard of but is rounding in on its seventh season could also conceivably show graphic disembowelment?”

A few years after the events of the first film, Robert McCall (Denzel Washington) remains a low-key vigilante warrior, helping out the downtrodden and the unfortunate thanks to his job as a Lyft driver. It’s at a much chiller pace than the period of time when he was dispatching Russian thugs with bolt guns, which allows him to spend some time mentoring a young man who lives in his building (Ashton Sanders from Moonlight) in the ways of standing up straight, doing an honest day’s work, not getting mixed up with gangs and other such dad-like behaviour. McCall’s only friends are Susan and Brian Plummer (Melissa Leo and Bill Pullman), former operatives like him who are just about the only people who know that McCall didn’t actually die when he pulled out of the force some years back. All that goes out the window when Susan is brutally murdered in Belgium, forcing McCall to blow his cover with his old teammate Dave (Pedro Pascal) and find out exactly who took out his best (and only) friend.

The Equalizer 2 leans harder on the episodic nature of its premise, spending more time showing McCall doing non-skull-cracking errands for Lyft customers and generally skewing closer to the premise of the show than the first film, but the fact remains that a film is a film and therefore cannot spend its entire running time showing, say, McCall trying to help an old man (Orson Bean) find a painting. Like all films of this ilk, The Equalizer 2 is about a man who follows a rigid code of conduct that’s entirely binary: people who do good things are good, people who do bad things are bad, and it is unarguably a good thing to do a bad thing to someone who did a bad thing to someone else.

There’s absolutely no moral murkiness to McCall, who is always shown to be doing the right thing, even if it doesn’t feel like it. His attempts to skew his young neighbour away from a life of crime are particularly dubious in that regard — he has no qualms about snapping the necks of a handful of caricatural gangbangers if it means preventing his protégé from taking a step in the wrong direction. The movie does not, however, explain what would happen if the protégé took that first step. (Based on the anecdotal evidence presented here, it would probably contain at least one stab.) It falls somewhere lower on the old-man fascism scale than the recent Death Wish remake or the ello-ello-ya-fackin-yobs boomer fantasy of Harry Brown, but that doesn’t necessarily inspire confidence. At least twice in the film, a brooding stare is interrupted by a character saying “What? I didn’t say anything,” which encompasses the overall thematic concerns of this type of film rather well.

On the bright side, director Antoine Fuqua and screenwriter Richard Wenk have cut down on the pithy badassery and well-placed one-liners a little. Even if McCall is a sexagenarian who can basically do backflips but also limps around, he’s less of an avenging angel figure this time around, which does a little to help ground this otherwise entirely ungrounded action flick. Fuqua takes a real circuitous path to move this story from its beginnings as an international spy story to an action movie that ends with Navy SEALs stalking our aged hero through a coastal Massachusetts town during a vicious nor’easter; it’s the only time in cinema history that an action scene has also felt like a Billy Joel song.

It’s pretty fucking stupid, but it works in large part because Fuqua is a strong action director whose projects are often not up to his talent. This is no different: its action scenes are clean and solid, full of interesting touches (at one point, McCall enters a bakery, slits open a bunch of bags of flour and sets a fan on them for essentially the only reason that it looks cool as hell) and sometimes violent as hell. (Leo’s death scene is particularly brutal, as is a superfluous close-up of a dead guy that seems to out Fuqua as a Joe D’Amato fan.) The Equalizer 2 is ultimately undone by its extremely simplistic black-and-white approach to nearly every situation.

It’s strange, because this extreme simplicity and ease-of-use is just about the only thing that Fuqua has ported over from TV. The Equalizer 2 rarely feels like more than just a particularly intense season finale in which all of the loose ends are tied up, but it also doesn’t benefit from the worn-in sense of comfort one gets from this kind of stuff. Its big emotional beats don’t work because we have no opportunity to know these characters; its attempts at giving McCall dope idiosyncratic working methods (like an obsession with timing beatdowns on his watch) and telegraphing their callback don’t happen with enough regularity to warrant any excitement. It’s a movie that has somehow appropriated the tropes of a TV show no one watches without even having the structure to apply them correctly, which is truly something. On the bright side, it’s ever so slightly better than the first one. By my calculations, they should hit on something decent by the time Washington is in his ’70s. ■

The Equalizer 2 opens in theatres on Friday, July 20. Watch the trailer here: