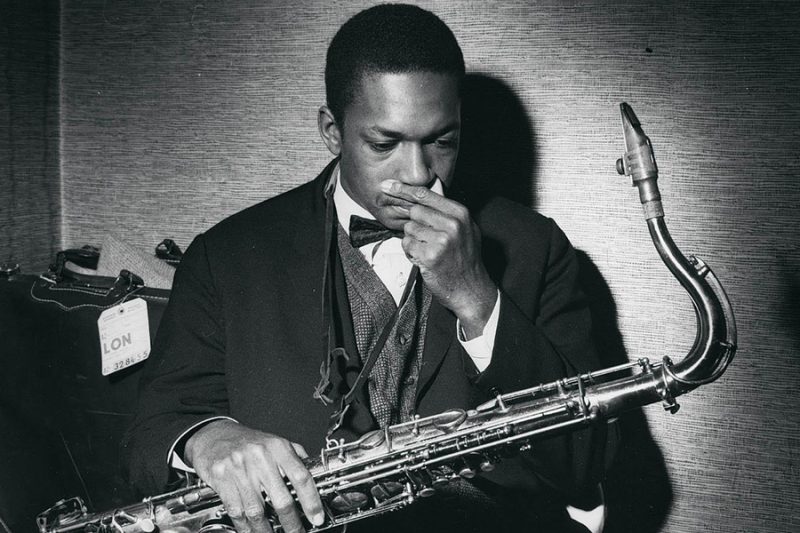 John Coltrane, “Untitled Original 11383,” Both Directions at Once: The Lost Album (Impulse!)

Not since Sue Graham Mingus in 2007 revealed the existence of live recordings made by her late husband, Charles, performing lengthy and lyrical jams with his orchestra at Cornell University during the spring of 1964 has there been such exuberance about a posthumous discovery in the jazz world. Yet unlike the Cornell tapes, which suffered aesthetically from age, deteriorating in quality and fidelity, Both Directions at Once sounds immaculate, like it could have emerged freshly out of the studio. One might be compelled to ask not how these missing recordings were lost for so long, but why?

When the sessions took place in 1963, Mingus would have been concurrently recording the extraordinary Mingus Mingus Mingus Mingus Mingus; Ornette Coleman was taking a breather following his triumphant Town Hall gigs, before reinventing the genre once again with the Chappaqua Suite. It’s possible that Coltrane’s Both Directions, a collection of fairly conventional hard bop and blues songs, sounded like an anachronism, out of step with the future trajectory of jazz. But it’s a welcome treasure today. The unearthing of heretofore unheard John Coltrane recordings — true musical expressions of life, liberty and the pursuit of happiness — is cause for celebration under any circumstance, but especially now, at a time when our American cousins are busy trying to decide who can and cannot enter their borders, who can and cannot stay with their families and exactly which lives matter most.

Tang, “It’s (Not) All Bad,” Super Happy (Art of the Uncarved Block)

“Just as there is a world hunger problem,” writes Jean Baudrillard in The Consumer Society, “so there is now also a worldwide problem of fatigue.” We embellish what Baudrillard calls “gloomy pleasure” from the normalization of a state of constant stress and tension, living a life out of balance. Rather than interpreting this cultural exhaustion as passivity or weakness, though, Baudrillard defends fatigue as a latent form of dissent: “The heroes of consumption are tired.”

There is a scene early on in the ill-fated Martin Scorsese and Mick Jagger-produced HBO series Vinyl where Richie Finestra, the high-powered, cocaine-fuelled record company executive played by Bobby Cannavale, has a revelation that literally brings the house down as he discovers punk rock at a New York Dolls gig. This wasn’t quite that. Surely there aren’t such overblown musical epiphanies left in this world. Rather, we’ve been given humbler revelations and, thankfully, more of them.

I’ve been carrying around one particular Dennis Miller joke for 25 years. It might have been from a mid-1990s cable stand-up special, before every comedian was raked over the scorching hot coals of 21st century American political partisanship. Like all of Dennis Miller’s jokes, it’s exceedingly idiosyncratic, to the point of being practically meaningless outside its original context. Miller, bobble-headed and riffing improbably on the absurdities of hierarchical Catholic doctrine — (how did he get there?) — tosses out the line: “I can never remember if it’s the cherubim or the seraphim that hangs from the roof of the cave.” I recall laughing out loud, tickled by the acrostic reference, which I would surely never find an appropriate place to use. That is, until I stumbled into Verdun, and McCormack Meats, which, in addition to being the best butcher shop on the island of Montreal — if not the entire world — is decorated inside with such kitschy memorabilia as yellowing family photographs, arcane comic book covers, gatefold sleeves for Led Zeppelin and Pink Floyd albums, bygone Québécois political campaign buttons, bronzed baby shoes and, yes, a porcelain angel fixed hanging upside down from the ceiling. This place hits the Dennis Miller ratio, babe: it’s one in a million.

I didn’t know Anthony Bourdain. But like millions of us, I felt like I did. Even though he spent a significant amount of time in Montreal, championing the local food scene on his popular TV show Parts Unknown, I doubt Bourdain ever set foot in McCormack Meats. I bet it’s the kind of place he would have adored, though: an unpretentious, family-operated, neighbourhood butcher shop that serves only the best cuts of beef, pork, lamb, poultry, fish and game. They make their own jerky and sausages, and their chickens are always farm-fresh. McCormack’s proprietors, the Ouellettes, greet customers with smiles and friendly chatter. Whenever I order something big — I am partial to a two-inch thick Porterhouse steak carved from the in-house 60-day aged short loin — M. Ouellette exclaims “attaboy!” making me feel like I hit a home run, or scored a touchdown. Everything I’ve ever eaten from McCormack’s has been nothing short of excellent — and at reasonable prices that neither the oldest markets nor the newest hipster butcher shops in town can match. I wish I could have taken Bourdain there, shown him the meat case and the rock ’n’ roll décor and brandished the Dennis Miller joke when he spotted the upside down angel. Because Bourdain was an upside down angel, one in a million (like Miller’s jokes, and McCormack’s butcher shop itself), I figure he would have laughed.