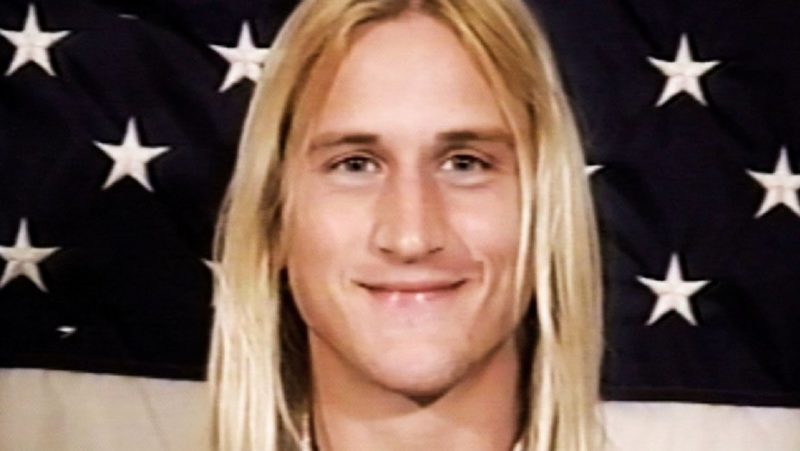 In 1994, Mike Diana’s controversial cartoons shocked the inhabitants of Largo, Florida enough to land him on trial for obscenity. Exploitation filmmaker Frank Henenlotter (Basket Case) delves into the whole mess with his colourful, punk-rock doc Boiled Angels: The Trial of Mike Diana.

Brashly narrated by Jello Biafra and pepped up with Diana’s graphic illustrations (that very often depict giant dicks and kids — you’ve been warned, Christians), the film dives quickly into the nitty-gritty of the trial, after dipping into Diana’s childhood long enough for us to know that he was just a normal kid with quirky artistic tendencies. His zine Boiled Angels, a collection of lewd and crude cartoons, somehow made the detectives investigating a serial killer in Gainesville think Diana might be their guy. When that didn’t pan out, the zines eventually found their way to the Assistant State’s Attorney, Stuart Baggish, who decided to charge Diana with obscenity. Henenlotter highlights the absurdity of it all with some history of alternative cartoons thrown in and great interviews with a variety of artists, including George A. Romero and Neil Gaiman.

Whether you already know the whole story or not, it’s a fascinating tale, delivered with a bang by Henenlotter. It’s hard to imagine something like this going to trial in an era where Disney porn is just a click away. Considering Diana is a pal of Henenlotter’s, it seems like he may have had a hard time editing out material. Some of the interviews repeat the same info after awhile and the film could have possibly used a slight polishing down. Also, instead of opting for more natural chats with Diana, Henenlotter places him in various locations where he stoically recites monologues on the whole affair.  Aside from these minor flaws, it’s a highly entertaining doc that’s a must-see for anyone from freedom of speech enthusiasts to zine lovers. (Roxane Hudon) 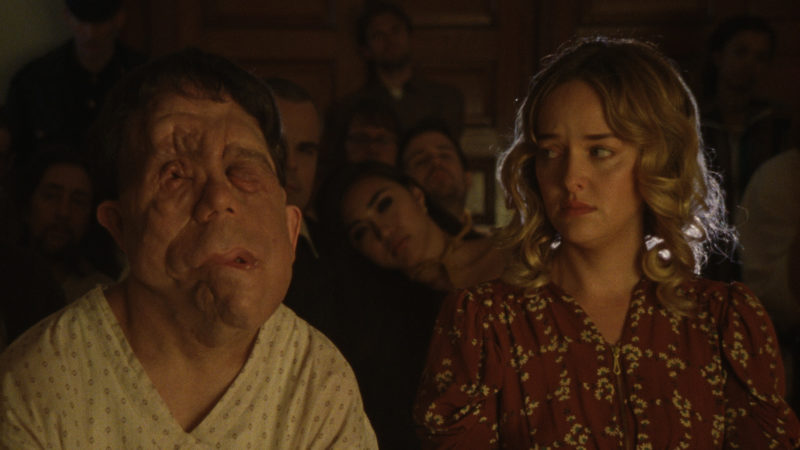 I had no idea what I was in for with this one, but what a pleasant and weird surprise. Written and directed by New York director Aaron Schimberg, Chained for Life is an indie oddball of a film, a meta movie that makes a series of weird turns from start to finish.

We follow the making of a horror film of sorts, directed by what seems like a parody of a snooty European director. The film’s starlet Mabel (Jess Weixler) struggles with the treatment of the disabled actors brought in to play an assortment of “freaks,” from a dwarf to a bearded lady and disfigured Rosenthal (Under the Skin‘s Adam Pearson). Scenes from the horror film are mixed in with what’s happening between takes and long dream sequences, blurring the lines between fantasy, fiction and reality.

Part cinematic homage, part reflection on beauty and disability, it’s also a collection of conversations between characters, each one unique and bizarre in his or her own way. There’s the pompous male star reeking of confidence, the older actress obsessed with skin care and the Herzog-like director who gives “Orson Welles in The Muppet Movie” as stage direction. Absurd quips pepper each encounter and just when you think you know where Schimberg is going, he throws you for a loop with an unexpected finale that makes you wonder what this whole thing was really about. Definitely a unique gem worth discovering. (RH) 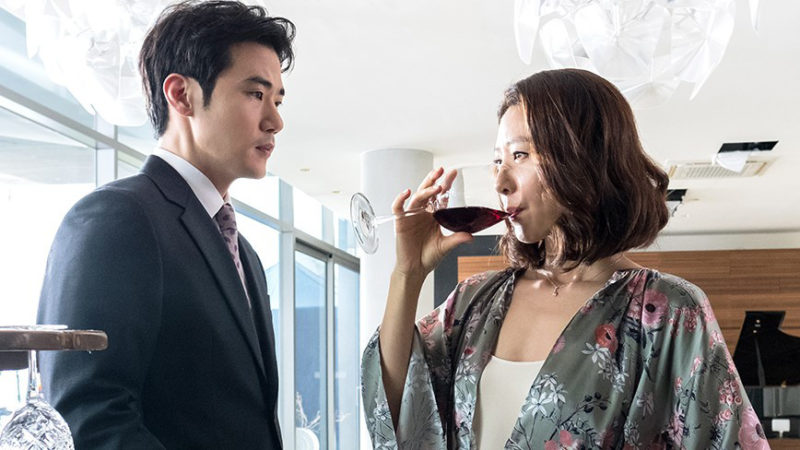 The impossibly wealthy CEO of a pharmaceutical company dies under mysterious circumstances; mere hours after her death, her body disappears from the morgue. Suspicions immediately turn to her put-upon trophy husband Park (Kim Kang-soo), who certainly isn’t less sketchy when we find out that he has a much younger mistress (Han Ji-an). Park becomes the main suspect in troubled cop Woo’s (Kim Sang-kyung) mind, but Park also feels the whole thing could be a set-up — something he can’t really prove without also incriminating himself.

The Vanished is pure popcorn puzzle-box thriller, existing somewhere between disposable Law & Order-type procedurals and potboilers that may or may not star one Liam Neeson. In other words, ambitions aren’t running tremendously high, but it works pretty well for pure twisty genre thrills. The main drawback is that director Lee Chang-hee’s style is pretty plain, with any scene involving emotions rather than the churning of narrative gears bordering on soapy.

The Vanished is also the kind of movie that builds twists around the deliberate obscuring of facts through technique; character identities are obscured by simply filming their hands or feet for key scenes, and Chang-hee’s tendency to dole out flashbacks in tiny increments until he can release the part of the twist he desperately needs tends to obfuscate the human elements of the story. It’s corny but effective, even if I have a sneaking suspicion that the whole thing is significantly less than the sum of its parts. (Alex Rose) 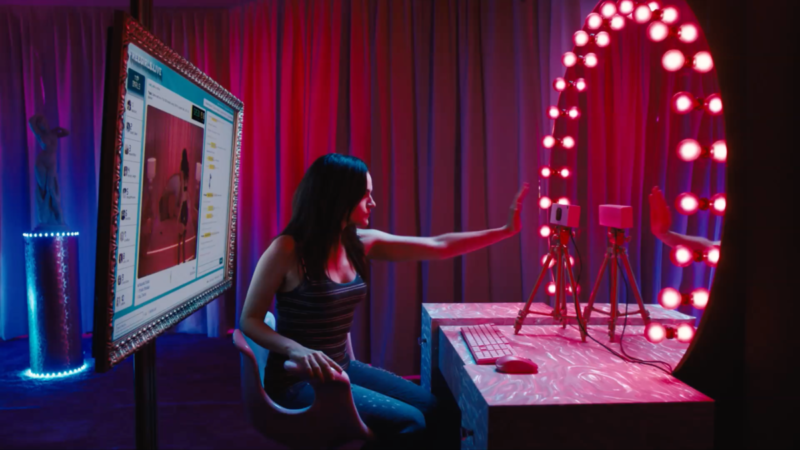 Doppelganger stories are inherently about our inner lives. Bizzaros and evil duplicates allow us to be fascinated with ourselves and wonder about the less savory parts of our personalities for a moment.

As CAM opens, we meet Lola (a fiery Madeline Brewer), a webcam girl trying to make her way up the site’s rankings with her creative shows. When the cameras and the private chats are off, she turns back into her regular self, Alice. Throughout all of the performances, she never shares her true self with her audience. One evening, she is shocked to discover an exact double of her performing online. Locked out from her own account, all she can do is watch this strange double becoming more and more popular but also break her own personal rules by performing new stunts that will threaten her life.

In entering the neon-lit world of camgirls, director Daniel Goldhaber and screenwriter Isa Mazzei find fresh new anxieties in the doppelganger genre. A story about the worst aspects of ourselves coming to life and betraying us becomes a doorway into privacy issues, fears of identity theft, loss of agency but also the often toxic disregard society harbours for sex workers, online or not.

It’s a gripping treatment of a classic genre element told through the prism of a workplace we rarely see depicted on-screen. Save your tokens for it. (Yannick Belzil)

Lisa Brühlmann’s Blue My Mind starts as a teen girl, Mia (Luna Wedler), arrives at a new school in the middle of year and struggles to find her place. Her first day is punctuated by a minor but shocking incident of violence, immediately undercutting all normal expectations for the tired tropes of the coming of age drama. There is something tremendously physical about the film as Mia’s body and hungers slowly begin to change, as it reaches for increasingly shocking adolescent horrors.

As if set underwater, the film’s aesthetic is cast in blues and greys. The soundtrack is almost aquatic, as if the film score were performed by underwater creatures and has the unusual quality of a whale’s song. This is mixed with a dreamy pop soundtrack that helps root the film in the overwhelming impulses of youth. The performances are natural but aloof and are portrayed by the camera with an intimate and curious gaze.

Throughout the film, Mia is torn apart by a tension between a desire to be unique and an instinct towards self-annihilation. A film made in a similar mold to Ginger Snaps, this is a female-centric body horror about the horrors of adolescence. It channels the almost universal experience of feeling a disconnect between body and mind, especially the sense that our physical desires are unruly and destructive. Achieving a balance between the moody world of art cinema and the adventurous transgressiveness of genre, Blue My Mind is a subtle and sensuous entry in the cinema of transformative body horror. (Justine Smith)