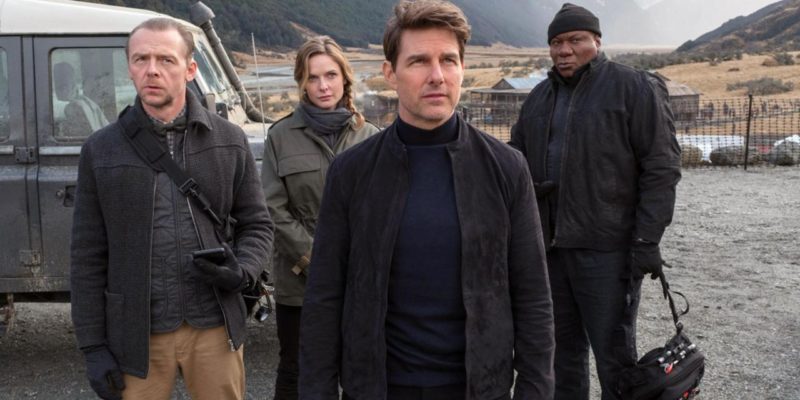 The first Mission: Impossible was released in 1996, at the height of what was then considered Hollywood’s most obvious period of creative bankruptcy. Studios were cranking out ill-advised adaptations of old TV series, handing them out to directors ill-suited to the material and watching perplexedly as some crashed and some hit with little rhyme or reason. On paper, the first Mission: Impossible had no reason to be any different. It was based on a TV show whose chief appeal to a younger generation was mostly limited to a cool theme song; it was directed by Brian DePalma, who had had a rough go of it for a few years and was seemingly taking this as a paycheque gig; and, strangest of all, it starred a young actor that, while hot, worked infrequently and had not done much — if any — straight-up action to that point.

Mission: Impossible, based entirely on its alchemical make-up, had no reason to become a hit; it had even less reason to spawn off five sequels, four of which are almost certainly some of the best and most ruthlessly efficient action movies of their respective decade. That this franchise has turned into one of the most dependable of all franchises is honestly impressive: it’s as if, 22 years from now, superhero movies have fallen completely out of favour, but they’re still making Ant-Man movies for some reason, and they’re better than just about everything else.

The reason Mission: Impossible – Fallout works so well essentially boils down to its star, the ageless, poreless, sexless bolt of pure energy that some call Tom Cruise. As the very concept of a movie star becomes muddled, Cruise stands almost alone — a thoroughly weird and off-putting figure off-screen who comes alive on-screen. Cruise’s focused intensity doesn’t always work out for the best, but the Mission: Impossible films are essentially made in his image. They’re obsessed with a perceived betterment by the raising of stakes; they’re not interested in existing unless they exist to be bigger, stronger and more immortal. At the risk of overrating a film that will almost certainly be surpassed by its-yet-to-be-announced follow-up, Fallout represents just about the most perfect melding of insane star and insane action.

Ethan Hunt (Cruise) has been tasked to recover some stolen plutonium that a shadowy cabal is planning to use to set off some terrorist attacks and save the world by decimating a third of the population. The operation goes poorly and global anarcho-terrorist Solomon Lane (Sean Devine) is released from custody; the IMF’s chief (Alec Baldwin) has no choice but to accept that the CIA (led by Angela Bassett) come and meddle with the plans, foisting a meathead agent (Henry Cavill) onto Hunt and changing his mission — a change that Hunt simply does not plan to respect. With Isla Faust (Rebecca Ferguson) mysteriously back in the mix, Hunt has to go against direct orders in order to save the world.

Fallout certainly doesn’t win points for narrative originality. Bringing back the same villain allows for some continuity but also doesn’t allow for something as dope as Philip Seymour Hoffman in the third film. It’s also pretty much based on the same premise as the previous one — the one where Hunt has to follow his own instincts even if they go against that of the IMF. That having been said, Fallout is surprisingly clear and well-written for a convoluted spy action movie where allegiances switch every 10 minutes. It strikes a good balance between taking itself seriously enough to bog down into complicated loyalty puzzles, but not so seriously that it can’t pause once in a while to make sure the audience is following. It’s a peculiarly effective experience in hand-holding that many blockbusters could learn from.

Ultimately, though, Mission: Impossible – Fallout is an action movie that lives and dies by the quality of its (plentiful) setpieces. Again, no one is reinventing the wheel — our tiny jaunty protagonist drives (and crashes) most kinds of transportation, jumps up and down buildings, kicks, punches, shoots, stabs, pushes and hacks his way across the world in several action sequences that are so breathlessly intense they may just qualify as one single, unbroken scene. This is, as far as I can tell, the sixth M:I movie to feature a race-against-the-clock bomb-defusing scene of some kind, and the best compliment that I can give it is that it still feels as if this kind of scene has never existed in any movie prior to this.

I can think of few down-the-middle action movies that are this ruthlessly effective and somehow strangely generic. Undoubtedly, much of the debate following the ecstatic reception of this movie will centre around the fact that it cannot be a more inventive, more original and more idiosyncratic action movie than, say, Mad Max: Fury Road or John Wick 2. It isn’t, really; those are in a category apart, and no one wins trying to pit things that are this great against each other. Mission: Impossible – Fallout is great precisely because it presents the best possible version of things that we’ve not only seen before, but that we’ve long since grown to expect to be terrible and derivative. It’s breathing new life into something without changing it at all.

None of it would work without the peculiar charisma of Cruise, who does nearly all of his own stunts here. Director Christopher McQuarrie is obsessed with getting Cruise’s face into the shot of the wildest and most hair-raising stunts, and it’s excessively hard not to share in his enthusiasm. Cruise — or Ethan Hunt, though the difference appears to be negligible at this point — somehow manages to take himself extremely seriously and yet be capable of deflating the inherent tension with taking yourself so seriously the next second. The things that make Cruise so out of place in his bad movies like The Mummy send Mission: Impossible – Fallout to the next level. Even if the franchise is ostensibly based on an intellectual property that doesn’t 100 per cent need Cruise, there is no way in hell that the movie could work without him. He’s just that good, and I’d be fine if he decided that all he ever wants to do from now on is be in these movies. ■