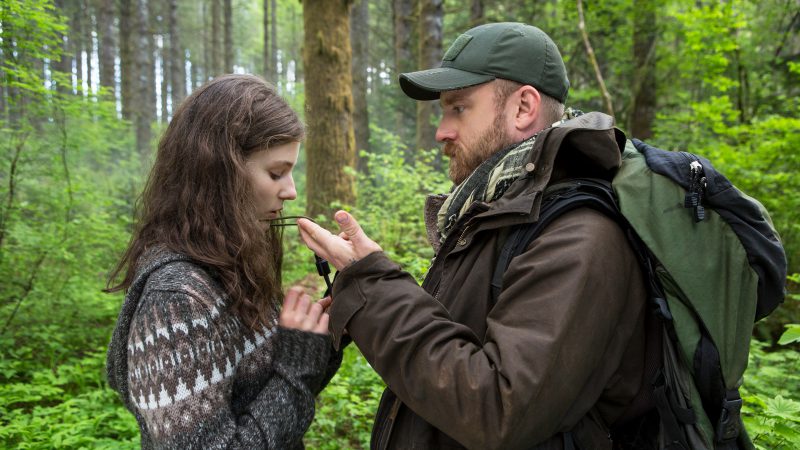 Thomasin McKenzie and Ben Foster in Leave No Trace

It’s been eight years since Debra Granik directed a fiction feature, but what a feature it was. Winter’s Bone wasn’t just a taut hillbilly noir — it introduced Jennifer Lawrence to the world. Her new film Leave No Trace has some commonalities with her previous one: both deal with remote communities, both have young women in the lead, both are based on novels. Leave No Trace, specifically, is based on Peter Rock’s My Abandonment, itself based on a real story.

“It just kind of happened,” says Granik. “It might not be a stretch to say I was attracted to both of the novels for some of the same reasons: how the characters are developed, or the fact that both of them are regional… but it’s not like I’m walking around saying ‘Oh, these are the three ingredients that I’m looking for in a project!’ But, of course, there’s a sensibility or traction that you carry with you through everything. In that sense, yes, I agree with you. It would be easy to deduce that.”

Will (Ben Foster) and his 13-year-old daughter Tom (Thomasin McKenzie) live in a forest preserve outside of Portland, Oregon. They move constantly to avoid being found by authorities, they mostly eat things they forage themselves and they spend most of their time in silence. They head into town once in a while so that Will, a PTSD-afflicted veteran, can pick up some meds that he immediately sells to a dealer to buy some food. It’s not a perfect lifestyle, certainly, but it works for them — particularly for Will, who seems to be constantly keeping demons at bay by making sure there’s someone on his trail at all times. As Tom grows older, however, she begins to question the necessity of their lifestyle, and a chance encounter with the outside world threatens the equilibrium that Will so desperately needs.

Leave No Trace has very little dialogue and even less exposition; Granik lets stray lines of dialogue do the heavy lifting and lets the viewer infer what they must. Without being elliptical or “arty” (for lack of a better term), Leave No Trace completely refuses to hold the viewer’s hand. I asked Granik how she approached trimming the novel to its barest essence. I bring up a scene in which a supporting character mentions having read about the protagonists in the newspaper; this is all that we know as an audience, but from that bit of information we can begin to fill in the blanks. As Granik explains it, however, that mostly comes down to the peculiar alchemy of editing.

“In that situation, there had been a fleshed-out follow-up scene that was more literal,” she explains. “I don’t think I’m hiding anything here — it was one of those moments where we took it out for a reason, but it wasn’t to obfuscate or to make the story less. I think it seemed like a lesser scene!”

As you can probably imagine, a film like Leave No Trace depends very much on casting and performances. Although McKenzie (who is Australian) has had some acting experience in the past, her performance comes across with the complete lack of affect that is generally found when casting non-professionals. As for Foster, he’s a million miles away from the kind of explosive performances he often gives in films like Hostiles, 3:10 to Yuma or Inferno.

“Thomas was 100 per cent unknown to me and all my colleagues,” says Granik. “We certainly had never seen her in anything. For all intents and purposes, she’s a complete unknown. I’m not saying she didn’t have experience, but she came with no baggage for me. I’d never seen her in anything or made any assessments about her. (…) She was tabula rasa for me, personally, and she had read the book so carefully and put so much of her own imagination in it. It was wonderful because she was going to motivate herself to immerse herself and take all the skill training when she got to Oregon. That was a big positive infusion of collaboration that I looked forward to myself.

“For Ben, though, I was looking to see if I could provide a role that goes in a different direction, just like you said. He’s done explosive… he’s very wound up in here, too. He’s hyper-vigilant, he’s intense, but it’s done in a different way. It’s the suffusion of it. You only know it slowly, and he’s only revealed in these very measured ways. He’s trying to fight against that, he’s trying to contain rather than externalize. Once he expressed interest, I thought it would be very fresh for him. But I do love to be able to provide a different kind of role for someone who’s well-known… I don’t mean A-list, but a hardworking actor. Similarly, of course, I like to bring someone in who I don’t have a previous connection to, but who’s responding super positively to the material of the film or the novel.” ■

Leave No Trace opens in theatres on Friday, July 13. Watch the trailer here: