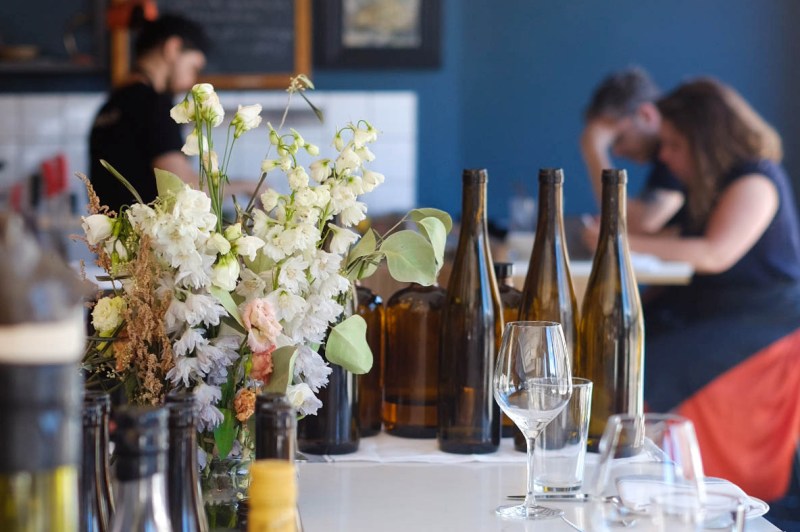 Lawrence re-opened its doors in June after a two-month closure for renovations. The restaurant famed for its thoughtful approach to sourcing ingredients from local farms and artisans — vegetables and fruits, honey made within the city, morsels of cheese found in Quebec and a commitment to ethically raised meat for their butcher shop — has entered into a new era.

The original incarnation, as the kitchen of Mile End bar Sparrow, stemmed from a dinner party hosted by Lawrence chef and co-owner Marc Cohen, then in his early 20s. “I had met Murad [Meshgini] a couple times and had happened to have cooked dinner for a few people in an apartment we were subletting which included his wife Reema,” explains Cohen. “She gave a glowing review of how that was to Murad and he approached me to partner with Ethan to [run Sparrow’s kitchen]. So we just started running a business together without having really even met before.”

This partnership eventually led to opening Lawrence in its current location in 2011. “I don’t think either of us were really equipped to be doing something like that… I had only just moved here (and) it seemed a little soon to be doing that, but we just kind of decided to compensate for any potential lack of experience by just working really hard.”

During this time, Joe Beef, Maison Publique and Au Pied de Cochon were enjoying massive success. Lawrence’s approach to nose to tail eating, famously championed by Fergus Henderson of St. John’s in London (one of Cohen’s greatest influences), as well as the cozy living room aesthetics of Annika Krausz’s design made for a combination that placed Lawrence in league with many of the city’s most successful restaurants. “I feel like when we opened the original Lawrence it was very much what we could afford, and it worked. It was a pretty classic design that I think influenced a lot of other restaurants and we did a lot of things eight years ago that people then did,” says Krausz, reflecting upon her first crack at designing Lawrence. 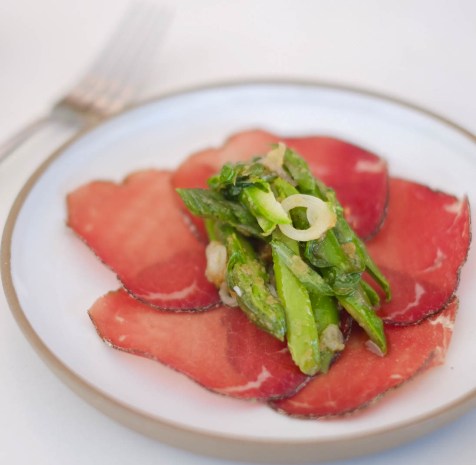 Despite having upwards of 50 seats, Lawrence’s dining room felt cozy: the bar and tables made from re-purposed bowling alley wood, a red-striped sofa beckoning you to sit as you enter, a string of exposed light-bulbs suspended across the ceiling and over a long, red table emblematic of the intimate family-style dining Lawrence would eventually be known for. “[We catered] to a pretty local crowd who seemed to appreciate the kind of simple, honest cooking we were doing,” explains Cohen.

The restaurant’s new incarnation is a complete transformation. Krausz’s new design is sleek and contemporary, with stylish leather stools in cognac placed around a u-shaped white marble bar atop a tamboured base of white oak panelling. The red table is replaced by a table of similar size and style, but now the same white oak as the bar. Elongated hexagons made of terracotta tile the western wall, casting a warm orange hue over the bar. The walls have been painted Hague blue, reminiscent of the colour of Krausz’s father’s painting of an oyster found next door at Larry’s. The most notable feature, however, is an opening to the kitchen with a three-seat bar facing the cooks as they work. And yet, despite a stylish remodelling, the bones of the restaurant remain the same.

“It’s an evolution of my taste and my design but it’s also a major evolution of Marc’s cooking,” says Krausz. The charm of mismatched antique china and light fixture coverings are gone, but the warmth and coziness remain to a certain degree. The bistro chairs and banquette are still there, as well as the original bar shelves, although instead of liquor they now hold scores of cherished cookbooks and jars of pickled cucumbers, ramps and rhubarb. 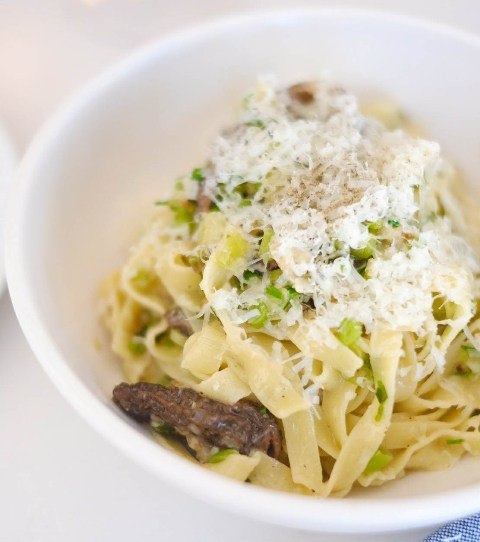 As for the food, the menus are no longer printed on sheets of card stock, but bound in smartly designed menu jackets: blue for food and yellow for drinks, the latter having a cocktail program new to Lawrence. The charcuterie platter has become a sampling of cuts available to order as stand-alone dishes. The smaller dishes of the menu come across as more elegant but simple offerings, such as Bresaola with asparagus: a half dozen thin slices of cured beef with a small stack of asparagus spears tossed in confited garlic, pickled shallots and a pinch of fresh tarragon leaves. The dish is rich with beef and garlic, creating a depth of flavour that is cleverly lightened by the bright freshness of tarragon and squeeze of lemon.

As for larger dishes, lunch classics such as the beef tartare and famous hamburger and fries are still staples, but more refined and seasonal dishes are present as well, like the taglietelle with morels and young garlic: a buttery dish of perfectly cooked pasta is tossed with plump, meaty morels and thin slivers of fresh young garlic, finished with a blanket of grated Parmesan.

These dishes are no longer reminiscent of St. John’s but are decidedly products of Cohen’s cooking. “We all can’t help but be influenced by the things that we’ve grown up with or have experienced in those formative years,” Cohen reflects. “As I was sort of figuring out that this [cooking] was what I wanted to do, and St. John’s was (an inspiration), I do feel that over the years I figured out exactly what my style is.”

What some are calling Lawrence 2.0 is a new imagining of the same restaurant that it has always been, only fine-tuned to reflect the people behind it more. Lawrence is nearly approaching a decade of business, an eternity in the current restaurant climate, and while some restaurants in their position would have remained unchanged, others like Lawrence have trimmed the fat, combed their hair, put on a clean shirt and said, “Here I am, refreshed, refined and ready to serve.” ■