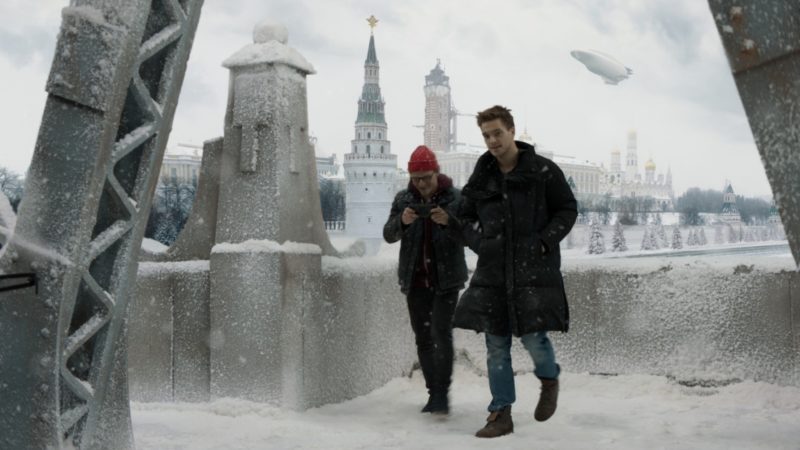 The Fantasia film festival is happening at two cinemas on Concordia University’s downtown campus through Aug. 2. Here are our reviews of films screening today and tomorrow:

Winston Churchill once said about Russia that it “is a riddle wrapped in a mystery inside an enigma.” That might also accurately sum up how you feel about A Rough Draft, a Russian blockbuster directed by Sergey Mokritsky (Battle for Sevastopol) and based on a novel by science fiction writer Sergey Lukyanenko.

Flying Matriochkas? A kaleidoscope of Moscows? Killer robot Russians? Step right up! Kirill (Nikita Volkov), a genius video-game man, returns home from work one day to find a strange, attractive blonde living in his apartment. His colleagues, parents, friends and love interest have all suddenly forgotten him. Is this explained? No, why should it be! What is also left unexplained, but simply stated, is that Kirill has been chosen to be a customs officer, supervising the borders between worlds that he…invents? Why? Who knows!

This definitely looks and feels like a video game, one where you might be really uncertain of what the goal is. It doesn’t mean the journey there isn’t entertaining. The different worlds are just varying versions of Moscow: the world where the Kremlin floats on a tropical beach, the winter wonderland, the Soviet throwback that’s really just a gulag, and the futuristic take with hovering islands and matriochkas used as weapons. Perhaps Mokritsky is leaving so much out, because this film is clearly set up for a sequel and maybe that’s where all the answers to my questions lie. Everything was a tad too tame to be the big Russian sci-fi blowout of my dreams, from the pretty-boy protagonist to the villain reveal. Hopefully, he steps it way up for part two. (Roxane Hudon) 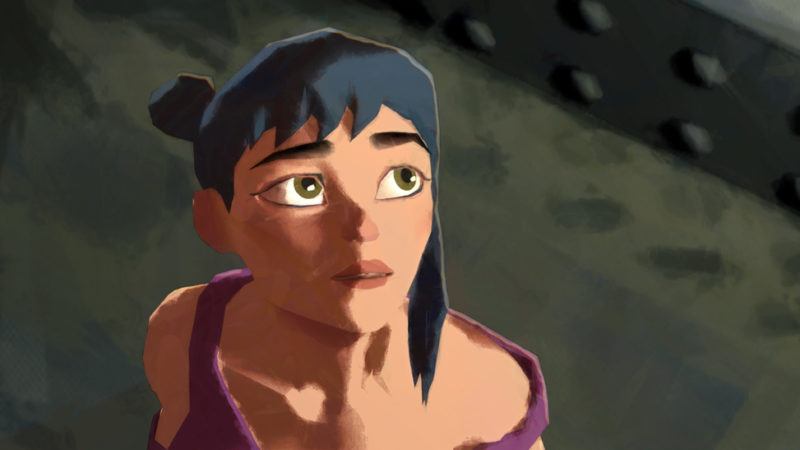 Mia has lived all of her life aboard the Megaride, a technological wonder of a ship that records and broadcasts its history as holograms. Her father Basile has big dreams for its future – dreams that are cruelly cut short when he’s murdered on his wedding day. Fifteen years later, the vessel has fallen into disrepair. Angelica, Mia’s cruel stepmother, has turned the wondrous boat into a crime den, a brothel where her daughters perform and drugs are exchanged. Mia will soon turn 18 and inherit the Megaride and her father’s fortune, but a glamorous gangster named the King boards the ship with plans of his own for the young woman.

The Megaride’s rooms and corridors are lovingly painted, giving it a great sense of environment but also the feel of a giant level ready to be explored. Mia’s life and backstory with her father is filled out by holograms conveniently flickering in and out, but she ends up being a blank slate, like so many video game protagonists.

However, the villainous gangsters populating the ship are a delight. Wicked stepmother Angelica exudes both glamour, weariness and doom while Salvatore Lo Giusto (aka the King) is played with equal measures of showmanship and sliminess by Massimiliano Gallo.

While the directors are obviously relishing the opportunity to pepper sex and violence into their science-fiction animated feature, the story remains as broad as the fairytale it draws from. It’s too risqué for young children, but there isn’t much there for an older audience either, despite great art direction and lively villainous performances. (Yannick Belzil) 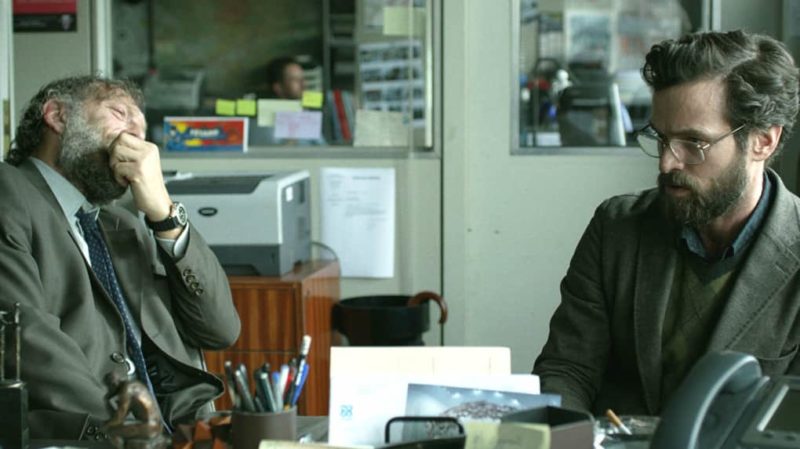 Erick Zonca’s Fleuve noir is a dark, moody detective story like only France (and, to some extent, Korea) seems to be interested in doing anymore: a film that essentially follows the broad lines of a potboiler in order to focus on character and an ever-seeping cloud of darkness that engulfs everything. Here, Zonca has settled on François Visconti (Vincent Cassel), a shaggy, alcoholic detective who’s only slightly more competent at his job than the bad lieutenants portrayed by Harvey Keitel and Nicolas Cage in the films of the same name. Visconti is tasked with finding a disappeared teenager while also trying to reconnect with his own teenage son, whose only interest appears to be selling drugs to piss off the old man. The investigation brings him closer to the missing boy’s troubled mother (Sandrine Kiberlain) and puts a creepy French tutor (Romain Duris) in his path as he struggles to solve a crime no one seems particularly eager to have solved.

Fleuve noir is 90 per cent atmosphere, crouched in a foreboding, rainy cloud of dread that sometimes masks over the fact that the film is treading water narratively. It’s a pretty common occurrence in this genre, especially when you consider that Zonca is best known for arthouse films that don’t necessarily spend much time exploring genre. Zonca seems clearly more interested in the tragic figure of Visconti, a sweaty and ragged beanpole in a suit two sizes too big who seems entirely fueled by misanthropy, than he does in the story, which is in turn perfunctory and overwrought. Cassel is a fascinating actor who makes a hell of a meal out of this character, delivering a performance that’s simultaneously outsized and affected, yet internal and drawn-in. Cassel alone is worth the price of the ticket, as the story itself feels more than a little familiar and uninspired. Cassel’s giving a Werner Herzog-level performance in a Law & Order-level script, which is fascinating enough its own right, but not quite enough to shake the feeling that you’re watching one particularly dark episode of a TV procedural. (Alex Rose) 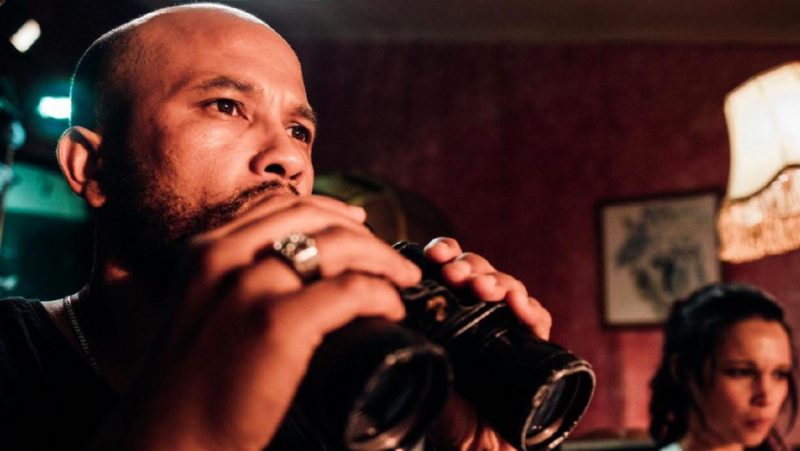 After a drug deal goes bad and leaves him disabled, Randal (Irshaad Ally) must figure out how to pay back a violent loan shark named Emmie (Danny Ross), while trying to protect his girlfriend Pam (Monique Rockman). Instead, he gets himself into murkier waters by witnessing the murder of a cop and then trying to steal from the cop killer, Lawyer (David Manuel), a brutal crime lord of sorts.

A lot can happen in and around one room. Dumisa builds tension by throwing all kinds of nail-biting obstacles in Randal’s way, mostly involving the safety or fingers of his poor girlfriend, as well as a set of compromising garbage bins and a really problematic accomplice. Number 37, the room where Lawyer lives and kills, becomes a literal window into brutal gang violence, which might make you ask: why do everything right in front of the window, lads? Not much of a criminal mastermind, if you ask me. This is Hitchcock doused with dirt and trash, sped up with some fun visual tricks, thrown into the grime of South African poverty. Dumisa nails dramatic build-ups that kept me, quite literally, at the edge of my seat, feeling as helpless as the film’s protagonist. A really impressive, well-crafted first film that warrants some worthy attention and praise for its promising director. (RH)