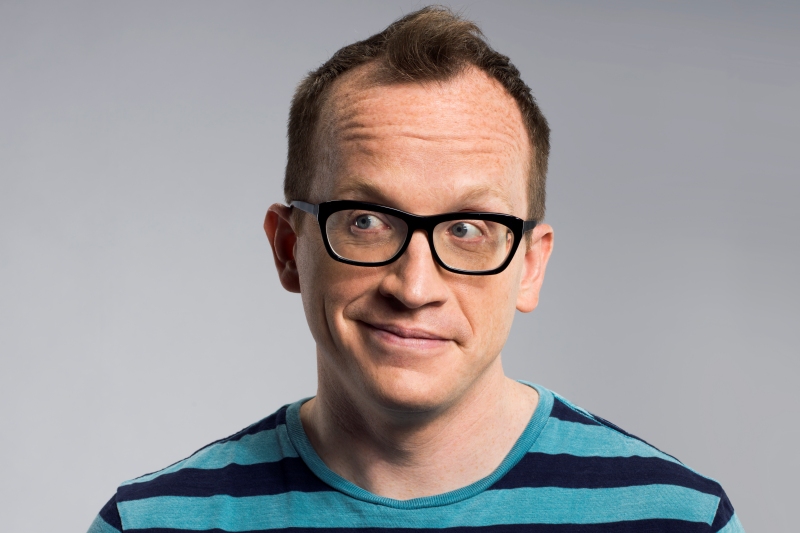 In becoming a mainstay of contemporary American comedy, Chris Gethard has become something of a utility infielder — a guy that’s generally great at a lot of things with no specific loyalty to any one of them.

Yes, he does stand-up, but he’s also well-known for his storytelling, his improv work with the Upright Citizens Brigade and his podcast Beautiful/Anonymous, wherein he talks to a stranger on the phone for an hour about literally whatever comes up.

He is also the host of The Chris Gethard Show, which may or may not have just aired its final episode, and as his website explains, he’s a “guy you’ve seen on television and in movies from time to time but can’t quite place.”

He thinks of himself as a guy who at long last figured out that it was about the journey, not the destination.

“I’ve come a long way,” he says, over the phone from Syracuse, New York. “When I was young, my career was something I was stressing so hard about. Like, ‘I gotta get this in order because it’ll solve all my problems.’ And it hasn’t solved all my problems, but I have sort of realized that things are going better than they used to, and I’m a lot more grown up now and I need to not stress so hard about the career and just enjoy it while I have it.”

The thing that set him free to pursue his particular brand of comedy and performance? Understanding that he wasn’t the funniest guy in the room, and that he didn’t need to be.

“I realized at a certain point that — especially coming up in New York when I did, coming up at the Upright Citizens Brigade when I did — I was like, man, I’m not the funniest guy here, so what do I have?” As it turned out, the answer was pretty simple.

“I [realized that] I might be the most honest,” he says. “I [realized] I might be the best at being honest out of my circle of friends. That was a very empowering thought, realizing that I’m just someone who’s gotten progressively more comfortable in my own skin over the years.”

It was out of this empowerment and the concomitant freedom that he created Career Suicide, a deceptively ambitious tour-de-force of an HBO special about, among other things, depression, suicide, alcoholism and the understanding that pain is a huge part of the human experience.

Highlights of that special include a bit about how suicide has a branding problem (“because we don’t judge people when they die in car crashes”), and a joke about how weight gain due to his antidepressants left him with “the physique of a sad uncle who’s like, ‘Maybe I should’ve got married.’”

“I didn’t think that material was going to work,” he admits. “Mike Birbiglia kind of challenged me to do it and said, ‘I think you can make this stuff really funny.’ He wouldn’t shut up about it so I finally went onstage and talked about a bunch of it just to kind of say, ‘Hey dude I tried it and it was just uncomfortable’ and instead it was just consistently met with a lot of positivity and I found that very empowering.”

Given Career Suicide’s subject matter and undercurrent of empowerment, it would seem as though Gethard’s focus, when performing, isn’t fundamentally about making people laugh. He takes issue with that, and maintains that despite appearances, his first instinct is always to be funny.

“I think there’s some crowds that want a certain amount of punchlines per minute. I don’t do well with those crowds [and] I’m totally fine with it. I just have to believe that if I’m able to walk a crowd through something that’s very, very real and very honest, and they can feel genuine, they can feel sincere — even if it’s dark — that means when we get to that laugh that’s on the other side of that together, that’s going to be a real laugh that’s just a little bit more worth having. I don’t have much interest in spoon-feeding an audience. I’d rather start with the honesty, take the risk, put my neck on the chopping block and see if I can get away with it.”

Gethard won’t be staging a repeat performance of Career Suicide during Just for Laughs (a live Beautiful/Anonymous podcast, however, is in the cards). He says that he’s moved on from that material, and describes it as something he needed to get out and then move on from. Still, he’s encouraged by the direction that special’s success has encouraged him to take.

“I’m working on a new hour and I’ll be doing a whole bunch of stand-up from that,” he says. “As you can imagine, working on Career Suicide for as many years as I did, the idea that I get to go back and do jokes and stories and stuff that’s very heartfelt but that’s not so much emotional heavy lifting, that’s a big thumbs-up.” ■