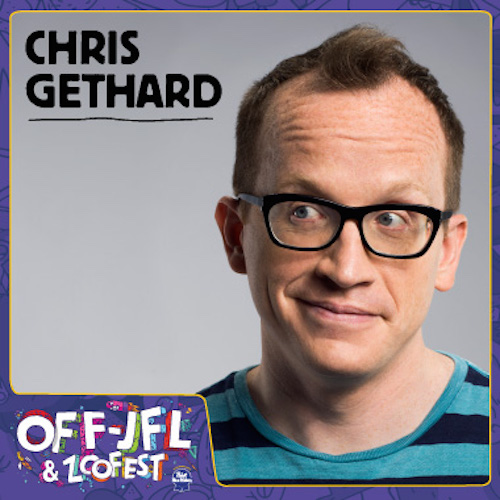 Because our conversation was largely about those three things, I went to Gethard’s Off-JFL show at MainLine Theatre last night largely in the dark about what I was going to see.

Being a Chris Gethard show, I knew it wasn’t going to be traditional stand-up. Set-up-punchline-reload isn’t exactly what the guy is known for. I also knew that while he was invariably going to tell stories about his life and his experiences in the world, it wasn’t going to be as dark, harrowing or personal as was Career Suicide. It couldn’t be. He said he wanted to move past that stuff.

And it was really, really, good.

Over the course of an overly-fast hour, Chris Gethard performed a show that was generally about how we become the people we become. Gethard grew up small in a tough part of Northern New Jersey. He was bullied. Bigger kids fucked with him and broke something inside of him. He pointed that rage inward and grew a chip on his own shoulder that no amount of joy was ever going to dislodge.

This isn’t to say that Gethard’s show was about rage, or anger, or even pain. It wasn’t. It was a show about being a person in the world, which as we all know is an experience dotted with joy and suffering and mostly just nothing. There’s a comfort in that, and in the fact that people like Gethard can talk into a microphone for an hour and make you laugh, make you think and make you remember that sometimes the stupid, weird shit that you think no one else thinks, feels, or experiences is actually hella universal.

I know I didn’t say anything about the jokes, of which there are many, or about the content of Gethard’s various stories and specific narratives within those stories. That was by design.

You should go and see what I didn’t write about. And why.

The show has no opener, so I can’t say anything about the show’s opener. If there were an opener, I bet they’d be great. Arriving on time is a good thing but if you come a little bit late, MainLine staff won’t bar you from the room. Latecomers (including Rapp Battlez’s Miguel Rivas) were quietly ushered into theatre without bothering anyone, so if you’re running late, don’t throw in the proverbial towel. Also, MainLine Theatre has a really good and affordable selection of booze, so instead of pre-gaming at some dive bar on the Main, just go drink there.