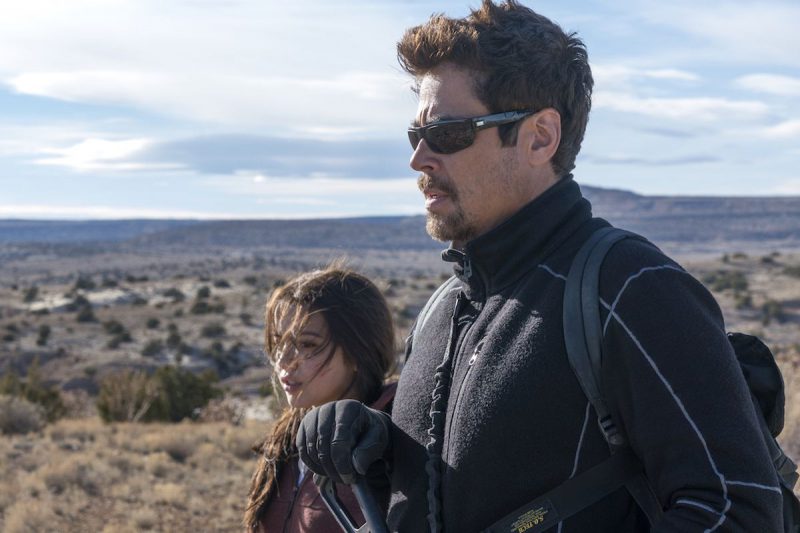 Isabela Moner and Benicio del Toro in Sicario: Day of the Soldado

The standout scene in Denis Villeneuve’s Sicario comes towards the end, when the character played by Benicio del Toro descends upon the people who robbed him of his family and exacts his own revenge. It’s a tense, perfectly executed scene, but it’s also an unusual one as it completely reroutes the focus of the film. Del Toro moves from a supporting character to a leading one, and the film never quite finds the same footing again. Nevertheless, the scene became the most talked-about aspect of a film that was much discussed. Based on the end result of Sicario: Day of the Soldado, it appears this scene was also pretty much the entire basis for this sequel, which doubles down on the grit and square-jawed grimness to somewhat middling results.

Terrorists are being snuck into the U.S. via the Mexican border, ostensibly with the assistance of cartels. After a deadly attack in a Kansas City supermarket, the CIA decides to bring back its two biggest salt-of-the-earth motherfuckers on their payroll: Matt Graver (Josh Brolin) and Alexander Gillick (Benicio del Toro). Both are known for efficiency over subtlety, making them the perfect candidates for a very convoluted mission in which they will kidnap the teenage daughter (Isabela Moner) of a cartel leader and make it look like the culprits are another cartel, thereby causing a war to erupt between rival factions. (I guess the ultimate outcome of it all is that cartels busy fighting a war don’t have time to slip terrorists past the border.) It’s a pretty robust operation with a high body count that seriously and permanently goes to shit when their convoy is attacked by Mexican police by the cartels, sending the young girl out into the desert with Gillick close behind.

It’s impossible not to draw comparisons between this film and current events — events that screenwriter Taylor Sheridan couldn’t have predicted, but ones that also give the film’s grim tactician approach a bit of an overreaching edge. It’s hard to see a movie about migrants and refugees that treat them like narrative cattle when you know that the very same thing is happening to people as we speak, but the film takes a downright absurd turn when one of Graver’s superiors (played by Catherine Keener) informs him that POTUS has reservations about the operation now that millions of Americans have seen two dozen dead Mexican policemen on Fox News. The audience knows that, in a movie not necessarily concerned with realism, its minor claims to moral decency are one of the most outlandish elements.

The film also struggles with the lack of an audience surrogate in the Emily Blunt mould. Though Isabel, the kidnapped teenager, sort of becomes the de facto deer-in-the-headlights lead of a Taylor Sheridan movie, she’s definitely more cargo than character for much of the film’s running time. One of the supporting characters is a young American man of Mexican descent who skips school every day to hang out with a much-older gangbanger, who in turn utilizes the kid’s passport as an easy way to get the job done. The inclusion of children in this dark night of the soul works sporadically at best, especially considering that the two main characters have become entirely steely badasses. The one-liner count is off the chain, as is the use of brief punctuations of outlandish gore, which adds a preening tough-guy bent to the proceedings that feels beyond aggro.

All this to say there’s a contradiction that lies at the heart of Day of the Soldado, between its desires to file down its protagonists from the morally murky depths of the original to double-fisted action badasses and the film’s poisonously, venomously cynical core. It’s a movie that flirts with downright nihilistic Haneke-esque values but that also drives those across using techniques perfected in cheap Michael Dudikoff and Chuck Norris ooh-rah military action movies, two poles that ultimately become hard to consolidate. As cynical as it is towards its topic, it’s also built with the inherent cynicism of Hollywood blockbusters woven throughout — a film that spits in your face just as it gives you the thing it thinks you want so bad.

From a purely functional point of view, Sicario: Day of the Soldado works. It’s tightly constructed and brutal, showing perhaps less formal mastery than Villeneuve but with a sort of gunky gutter-trash vibe that undeniably matches its dodgy politics. I have to admire that the studio went out on a limb not only to make a sequel to a movie that was only a mild success at best, but made that sequel into a cynical, blackhearted dick-swinging action movie with more anger and bile than it has good sense. Day of the Soldado is not exactly apolitical (let’s say that if you’re lapping up fear-mongering about open borders and Islamic fundamentalism, it certainly won’t assuage your fears) but it also has the gall to feel more or less entirely hopeless. In this particular period of history, that kind of attitude isn’t exactly welcome or helpful — but it is accurate. ■

Sicario: Day of the Soldado opens in theatres on Friday, June 28. Watch the trailer here: