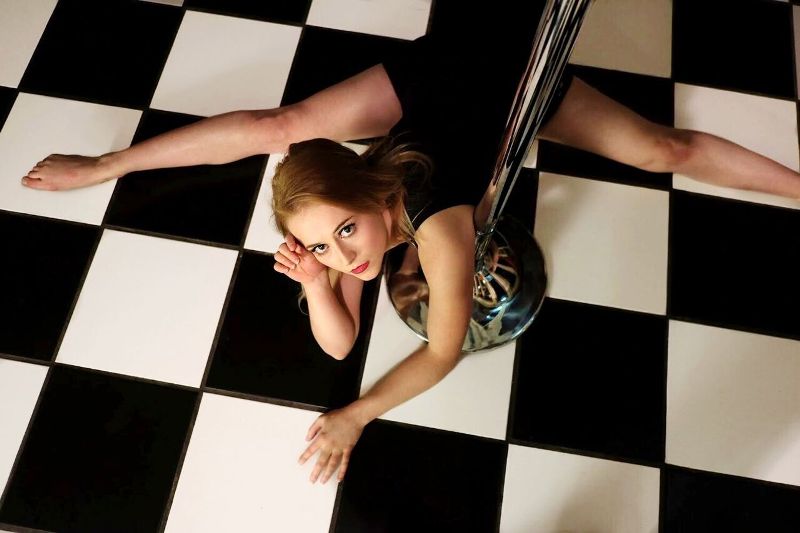 Until this Sunday, June 17, the Plateau will be teeming with independent, often edgy, sometimes experimental theatre, comedy, dance, music and other types of performance art at various venues. To see our Top 10 festival highlights, look here, and read on for our third batch of reviews (see the first batch here and the second batch here) of recurring shows that you can catch on the festival’s final weekend:

Skipping ur Mom’s Funeral and Eating Pizza Instead

Described in the program as “edging on the absurd,” Skipping ur Mom’s Funeral and Eating Pizza Instead may actually seem emotionally real for anyone who’s been there. Intense and well-acted, this short-ish show does an excellent job of showing the evolving dynamics between three very different personalities and coping strategies, while implicitly raising questions about funerals and mourning as social performance rather than anything actually healing for those most impacted by loss. While the ending may come off as a little abrupt to some, this is still worth fitting into your schedule, just give yourself a little bit of time to breathe and process after rather than rushing straight off to another show. (Kristi Kouchakji) MainLine Theatre (3997 St-Laurent), June 17, $10/$8 students. (NB This venue can only be accessed by one long flight of stairs.)

Xhignessed It: A Celebration of Failure

Anyone who’s ever dealt with impostor syndrome, who has lain awake at night reliving embarrassing moments from years ago, or whose inner critic is so harsh that even thinking about it sets off a shame spiral (sorry) will find something to identify with in Xhignessed It. The metaphor used for the things we hold on to is really apt, and offers a coping mechanism in and of itself. It’s also really nice to see a show about a dude’s own vulnerabilities that doesn’t romanticize it or turn him into some kind of super-macho “hero” by way of resolution. With that said though, the frequent costume changes by the inner critic are ultimately kind of disruptive to the emotional flow of the piece (and definitely more elaborate than they need to be), and, days later, I’m still trying to figure out if the character’s base costume was meant to normalize gender non-conformity (if so, yay!), or if there was some other intention that I’m missing. Either way though, there aren’t many Fringe shows that would make me add to my academic reading list, and it reflects well on this one that I did. (KK) MainLine Theatre (3997 St-Laurent), June 16, $8 students. (NB This venue can only be accessed by one long flight of stairs.)

Justice on the Ropes: A Clint Hacker Mystery

Justice on the Ropes: A Clint Hacker Mystery has a lot of potential as a kind of slapstick wrestling noir, given the right dramaturgy, directing, and performances. Hopefully, someone with the resources to provide or support these things also sees this, and ultimately re-stages a new and improved version sometime in the coming years. There’s clearly a lot of heart in this particular production, but sadly, it’s just not overdone well enough to support the level of deliberate overacting across the board here. (KK) Studio multimédia (4750 Henri-Julien), June 15, 16, $10/$8 for “people in awesome pro-wrestling costumes”

Around the World in Eight Mistakes

Around the World in Eight Mistakes is an entertaining, contradictory piece of storytelling that makes up for in charm what it occasionally lacks in self-awareness. There’s clearly a good reason why Sophia Walker has had success as a spoken word artist, and she’s clearly had an interesting life, several major moments of which are retold here. The earlier stories in particular raise interesting questions about what freedom means in different contexts and what forced international relocation can do to families. With that said, I can’t quite resolve the conflict between saying at one point that cowardice is the flip side of adventurousness in that all running off for an adventure is really just running from life problems, and then also concluding that adventure is the only reason to ever move countries. Still, it’s an entertaining 45 minutes, and anyone who’s moved long distances at least once should find something that resonates. (KK) Montreal Improv Theatre A (3697 St-Laurent), June 15, 16, $8/$6 students/seniors (NB This venue can only be accessed by one long flight of stairs.)

Wild Bill’s Facebook Livefeed Feeding-Time YouTube Yeeeehaw! is the kind of (initially) very goofy thing you can really only find at a Fringe festival. Wild Bill is a pet clown fish whose feeding times are livestreamed as a children’s show by his mild-mannered human companion, who in turn uses the show to teach kids about ecological issues. The livestream then goes viral, culminating in both a psychological crisis and a dark moral dilemma that ultimately implicates the audience as well. The shift in tone from felt a little abrupt though, which may have just been the result of a tech problem at a crucial moment—the show relies as much on the performer (and fish) as it does on projecting the livestream with viewer comments for the audience. A lot of work has clearly gone into this and overall it’s fairly well done, but it does mean that any tech fails demand quick thinking, and risk disrupting the emotional arc of the show. It’s still absolutely worth seeing, but maybe don’t actually bring any kids to it. (KK) Freestanding Room (4324 St-Laurent), June, 15, 16, 17, $7/$10 (NB This venue can only be accessed by two flights of stairs.)

A semi-musical interactive murder mystery, Slaying in Suburbia is a really good time if you like a lot of active participation, murder mystery dinner parties, and/or Desperate Housewives. If you’re not so into any of that though, then it can kind of drag, given the soapy absurdity of the plot and that so much of the show’s 90-minute slot is given over to inviting the audience onto the stage to mingle with the characters. At a certain point, the structure also becomes fairly predictable, which also doesn’t help the sense of time passing very slowly. Still, the singing (especially the solos) is great, and with a big (and enthusiastic) enough crowd this could be a really good time—just sit near the front, and maybe BYOB. (KK) MainLine Theatre (3997 St-Laurent), June 15, 16, $10/$8 students, seniors, Fringe artists, anyone sporting feminist attire/tattoos, QDF members (NB This venue can only be accessed by one long flight of stairs.)

Quebec actors Magalie Rouillard and Florent Deschênes deliver exceptional performances in Sara, Rouillard’s (French-language) tale of a strip-club dancer desperate to escape the exploitation of her job and her domineering ex-boyfriend, club manager Michael. Deschênes plays all three male characters, transforming like a chameleon between scenes, but he shines darkest as the creepy Michael. Rouillard, too, transforms as the play progresses, encouraged by a friendly open mic host to perform her slam poetry for the public, then to audition for a dream job that would break the emotional and financial chains tying her to her stripper pole. Despite the familiar theme, Sara avoids the expected clichés. This is Rouillard’s first stageplay and she makes full use of her background in slam, dance and stuntwork as she weaves and choreographs a tale of fear, violence, hope and revolt. This was the easily the best drama production I’ve seen at this year’s Fringe. Trigger warnings: sexual assault and realistic violence. (Peter Wheeland) Petit Campus (57 Prince-Arthur E.), June 15, 16, $10

Nominated for three Montreal Fringe (Frankie) awards, including Best French Production, Mme Brûlé is a comedic tour de force from Évelyne Laniel, who plays a substitute teacher living on the frayed edges of a nervous breakdown. Fresh out of teaching college, Mme Brûlé’s first day goes from bad to worse as she learns she’s just the latest in a series of replacements and that the school principal expects her to have piles of ungraded papers marked in time for parental visits at the end of the day. Don’t worry about your French skills, much of Laniel’s comedy is Mr Beanishly physical, from her OCD desk arrangements to her mocking portrayal of school children as velociraptors. School was never this much fun. (PW) Montreal Improv Espace B (3713 St-Laurent #202), June 15, 17, $10

Glam Gam productions once again brings us on a tour of a familiar storyline, but now palatable for modern audiences with a shifted focus on the Queer community, a nearly all female identifying cast, and the inclusion of the concept of consent. Greasy follows Dani (short for Danielle) Foucault and the adorable Winter Valentine after their short-lived, snowy romp at Igloofest comes to an end. Psych! Dani and Winter both end up at Sacred Ladies of United Trinity (S.L.U.T.) School for Girls, where the Pink Tacos reign supreme and Dani’s group, the Derby Dykes, lust after them. Other welcomed updates to the story include coveted dildo prizes, incredible Drag Performances from the neighbouring high school D.I.C. (Disciples of the Immaculate Conception), and welcomed changes to iconic numbers like “You’re one of the Ones I Want.” A tightening of the off-key harmonies on numbers like “Milkshake” would take Greasy to a level of near perfection, but their remarkable cast performed beautifully, despite persistent sound issues. Highlights include Dani’s pal Rummy’s inner struggle, and ultimate defeat of the outer manifestation of their inner saboteur, a hand puppet named “Kink.” Don’t miss this show! (Maurena Taylor) Cafe Cléopatra (1230 St-Laurent), June 15, 16, $10

It’s the ’70s, baby! The good ol’ days, when the beers were cold, the kids were wild and the tunes were hot. We join “The Butcher”, a local Pirate radio host cruising the airwaves in his DIY Pirate station in a semi-private location, the basement of Oulala Cinéma. With recording equipment, milk crates of records and a scattering of beer cans, SCUM FM paints a believable and familiar scene and feel. The warm glow of nostalgia sets the scene and it’s almost as though the audience was sporting the same yellow tinted aviators our “hero” sports onstage as he swings loose, verbal punches at the Pop Culture, mass media and even local eateries. When the mainstream, and therefore detestable, station 105.5 FM’s formulaic show, “Mike, Caroll and the Dink” holds a contest to win Iggy Pop tickets, we learn what’s behind the Butcher’s rage: sadness, rejection and missed career opportunities. James McGee performance is grounding in a stream of rather ridiculous, but ultimately entertaining guests spots, as we observe the Butcher cut the fat, and find the real meat of their passion project. (MT) MainLine Theatre (3997 St-Laurent), June 16, 17, $10