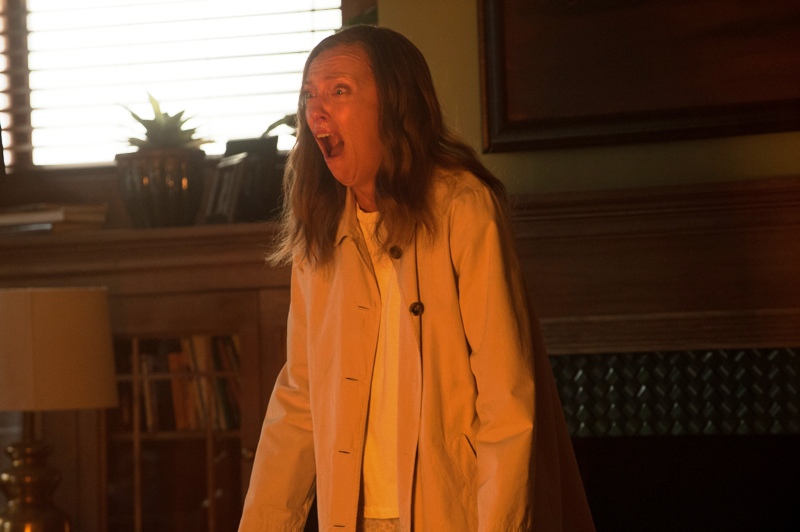 Every year, one or two horror movies come out of the festival circuit with unbelievable, nearly unsustainable levels of hype. These films (which count amongst their ranks things like The Witch and It Follows) have been dubbed “elevated horror,” a term that many have already rejected as a classist and loaded term.

Nevertheless, it’s under this umbrella that Ari Aster’s Hereditary has been discussed since its Sundance premiere — a fact that the filmmaker is certainly acutely aware of.

“It’s a shame that the genre has such a bad reputation among the ‘elite’ (laughs) to the point where you need to distinguish whether a film is a celebration of the genre or an elevation of the genre,” he says. “A lot of horror films are very cynically produced, and I don’t go to see every horror movie because it’s a crapshoot. A lot of these films are being made in order to make a quick buck; they’re being made cheaply, but they’re also made without seriousness of purpose.

“But that’s nothing new — we had B-movies in the 1950s. There were always examples of B-movies that had more on their mind, or were made with greater sophistication, like the Val Lewton films, for example. It’s a difficult question in some ways, because I guess if I’m going to make a horror film, I want it to fall in that weird subgenre of ‘elevated horror.’ And for that reason, when I was pitching the movie around, I was describing it as a family tragedy that warps into a nightmare.”

Toni Collette stars as Annie Graham, an artist who lives with her husband (Gabriel Byrne), teenage son (Alex Wolff) and disturbed pre-teen daughter (Milly Shapiro). Annie has been struggling with grief ever since the death of her mother, despite the fact that the two had a fractured relationship at best. Her deceased mother was very close to the daughter, Charlie, who already seems to have enough issues to deal with. Annie joins a grief support group but finds little relief — until supernatural events and further tragedy send the family’s life into even more of a tailspin.

Grief features heavily in the film, and its potent sense of the dramatic — and its willingness to stretch it out thinner than you would ever expect from a horror film — is its driving force. “The idea was to play with people’s expectations,” says Aster. “There’s a complacency that comes with watching a genre film — you know the formulas, you know the conventions, you know the devices and there’s an anticipation of a payoff. But part of the joy of genre filmmaking is, if you have a feeling of mischief, to lull people into thinking they know what’s happening, then pull the rug from under them. It’s what Hitchcock did in Psycho. I’m always looking for that as a filmmaker — I’m hoping for that moment where I realize I’m not in control of the experience. The film is in control.”

Even within the scope of slow-burn horror movies,Hereditary burns slow and low. For much of the film’s duration, the horror comes more from the knowledge that your family and your genetics are going to fuck you up in an insidious, irreparable way that demons and ghoulies could only dream of. I bring up that, as someone who generally isn’t interested in the typical concerns of horror films (ghosts, possessions and other occult occurrences), I found that creeping inevitability terrifying.

“That was the idea,” he says. “I wanted to make something that was hopefully rich with metaphor but wasn’t leaning entirely on that. Yes, the demons in the film are personal demons, but then, in order to satisfy the demands of the genre, there are other demons. I’m not somebody who believes in that stuff either, but the fact that I was referencing actual demonology… playing with that started to make me nervous (laughs). I’m not particularly superstitious — I’m Jewish, not Catholic — but I got spooked by how much real stuff we were messing with.

“For me, the most intense part of the research when you’re looking into witchcraft and stuff like that is not the lore so much as just the idea that there are people out there who do believe in this stuff and are using it to harm people,” he continues. “Whether it works or not, that’s their intention. That’s what’s scary about witches — the idea that there are these Machiavellian forces in the world that have malicious intentions.” ■