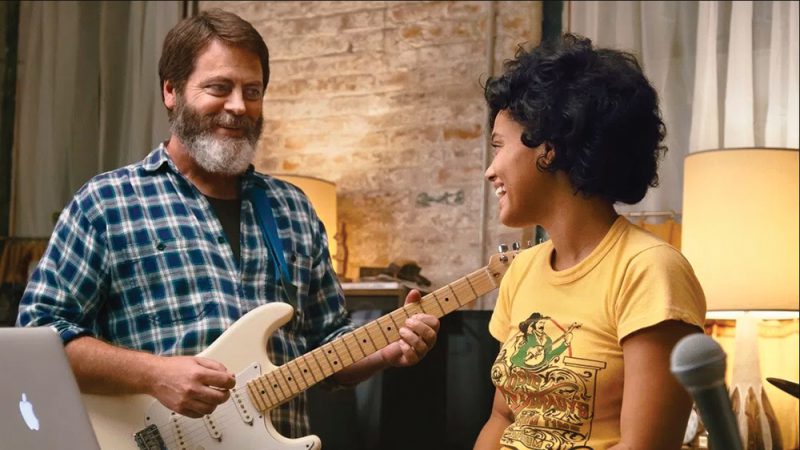 I spend an inordinate amount of time in record stores, and to be perfectly honest, the idea of a feel-good Sundance dramedy in which Nick Offerman plays a Brooklyn record store owner fills me with dread. High Fidelity only comes about 30 per cent of the way to depicting the existential misery of a true crusty record store lifer; no one would actually want to see an accurate depiction. When Offerman’s character started chiming in with the kind of crusty record store dude opinions that are actually more the kind of music taste espoused by people in their early 30s who performatively brag about how they stay home all the time and are so old now (Animal Collective, Sleater-Kinney, Songs:Ohia), I became very wary indeed. Hearts Beat Loud is a movie that, on paper, should not work. It comes way too late in the feel-good Sundance game, its every nook and crevice having already been explored by dozens of movies a year (some of which even star Nick Offerman).

But I’ll be damned if Brett Haley’s Hearts Beat Loud isn’t actually pretty damn efficient at what it sets out to do, and the key is a very simple one: extremely low stakes.

Frank (Offerman) has owned a record store in Red Hook, Brooklyn for the last 17 years, in the same neighbourhood where he also raises his college-bound daughter Sam (Kiersey Clemons) after the death of her mother a decade or so prior. A never-was pop star whose interest in his own life’s work is currently heavily on the wane, Frank has spent his entire life trying to get his daughter to jam with him, which she does reluctantly while cramming pre-pre-med classes in preparation for her move to UCLA. She’s also beginning a tentative relationship with artist Rose (Sasha Lane) and generally not an age where jamming with her dad is a fun Friday night activity.

Still, they manage to jam out one song (the titular “Hearts Beat Loud,” with lyrics by Sam) that winds up being pretty good — good enough, at least, for Frank to upload to Spotify, where it lands on a “Hot New Indie” playlist that’s overheard in a bakery by Frank one afternoon, suddenly giving him ideas for the future away from the record store that has become a ball and chain.

You’ve seen this movie before. It’s a movie about separation anxiety, about growing up, about the looming threat of an empty nest, about grief, about family, etc. There’s nothing new here and, frankly, the elements that Hearts Beat Loud presents are no particular innovation from no particularly interesting angle. The music is thoroughly catchy-yet-forgettable electro-ballad pop; you wouldn’t be surprised to see Katy Perry or Florence and the Machine drop a version tomorrow morning, and you would find yourself humming along at the grocery store even if you’ve never heard it before. Frank’s entourage (a stoner bartender buddy played by Ted Danson, a landlord / love interest played by Toni Collette) are immensely likeable if not exactly integral to the plot, and the dead mom thing (tragic as it is) is way too much of an indie movie crutch to be super effective at this point. Hearts Beat Loud does a lot of stuff about as well as it should, but it hardly transcends any of it.

What does work extremely well about Hearts Beat Loud (and subsequently brings everything that’s rote about it up a notch) is how small it is. All of its story beats are, in the pantheon of things that have ever happened in movies, extremely inconsequential. Even in the scope of my life or your life, they may not even rank in the top 20 when everything is said and done. Frank’s life changes for the better when he hears a song he made up with his daughter in a coffee shop… where everyone is ignoring it. The song gets a little attention, but their lives never change; they never shoot up the charts, they’re never recognized on the street and they never even play a show in front of more than, say, 30 people.

Movies like this are so often predicated on the work of art being life-changingly good to the point where it completely alters the course of the characters’ lives, which ultimately leads them down the same path where they learn that success does not immediately result in happiness. Hearts Beat Loud doesn’t go anywhere near there; though it takes a kind of extremely minor rags-to-riches beat to get going, it’s ultimately very rewarding how small and human it manages to remain.

Hearts Beat Loud represents a pretty decent example of how to follow a formula just enough to move away from it. It’s a modest film with equally modest ambitions, powered by a likeable enough cast that you can almost excuse that the only real emotion it can muster up is the one of comfort a familiar record might bring. ■