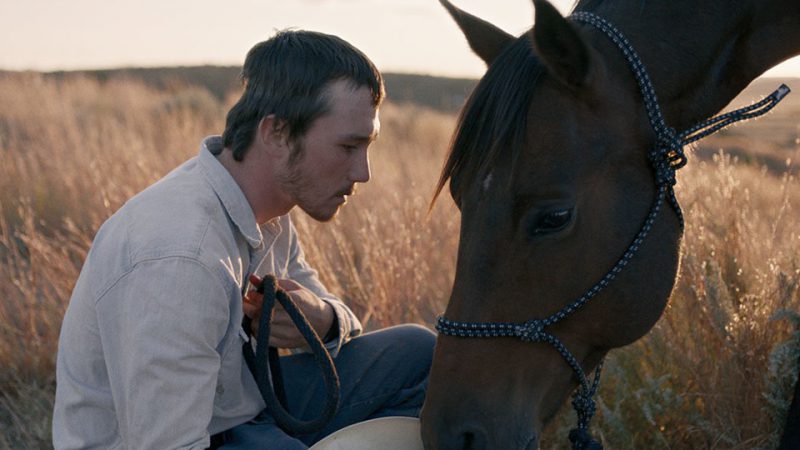 Brady Jandreau in The Rider

In The Rider, Brady Jandreau falls off a horse and has a nearly fatal head injury. Brady (Brady Jandreau) competes in rodeos, but is also one of the best horse trainers in the county. Sitting at his family’s kitchen table, in their small trailer, he watches a YouTube video of his near-death experience in an early scene. His head is recently shaved from surgery, which has left him with a jagged scar that wraps around the back of his head and a metal plate permanently lodged in his skull. He has a severe concussion and might never ride again.

In a film about literally getting back onto the horse, director Chloé Zhao crafts an improbably intimate portrait of identity and spirituality that challenges the line between fiction and reality. The performers in the film are not actors, but an actual family that Zhao had met several years earlier shooting her feature debut, Songs My Brothers Taught Me. Jandreau had worked on the film training horses and she wanted to feature him in her next project, when he took a near-fatal fall very similar to the one in the film.

The story is crafted around that incident. It not only showcases the painful realities of head trauma but the difficulty in balancing your life once you can no longer follow your chosen path. For Brady, this is more than just a question of changing jobs but denying himself the meaning and happiness he draws from his connection with horses. Not being able to ride them represents a true crisis of faith.

The film has already drawn comparisons with some of the greatest films in the American film canon. It shares narrative and even stylistic connections with Nicholas Ray’s The Lusty Men and the more obscure, though nonetheless poetic, Junior Bonner – a lesser seen Sam Peckinpah film about a veteran rodeo rider returning home. The Rider feels like a natural continuation of the legacies of those films, though equipped with the conceits and conditions of a contemporary world that feels increasingly alienated from the physical demands of working the land and spending time in nature.

In an effort to contribute to the household while he’s sick, Brady gets a job in a supermarket. The handful of scenes that feature him without his hat and in an awkward vest almost have a dystopic vibe. In a film with so much vibrant outdoor sequences, rich in colour and mood, these interiors are ugly and mechanical. Even Brady’s movements seem unnatural in this setting, though his soft-spoken attitude imbues even this space with a kind of tattered serenity. While a man of few words, there is always a sense that boiling below the surface is a rising wave of frustration that threatens to engulf Brady whole.

In terms of working with non-actors, it is also difficult not to think of the films of French auteur Robert Bresson. Bresson, who directed films like Au Hasard Balthazar and Mouchette, had a unique cinematic philosophy related to spiritually and the performer. He never used established actors, preferring non-actors (he called them models), as vehicles for his cinematic explorations of faith and morality. Rather than demand grand emotional gestures of his non-performers, he asked that they be subdued, almost un-emotive. Through montage that establishes point of view (something that Hitchcock does as well), the audience relates to these models through their gestures and gaze. By seeing the world through their eyes we are able to connect with them and, as a result, connect to the film’s more abstract principles of faith and longing.

Zhao largely operates under similar parameters. While there are clearly limits to some of the actors’ abilities, there is a naturalism in their blankness as well. The film’s quietness and the introspection speaks louder than most dialogue. Far more is conveyed through the ease in which Brady interacts with horses or members of his own family. There are gestures and intimacies that cannot be learned, only lived.

The Rider’s evocative simplicity means that the plot trajectory matters a lot less than the poetic though engrossing way it is told. Undeniably an art film, the movie’s story and atmosphere still achieves a wide appeal. The Rider manages to be a great film that fits into the dying art of the low to mid-range budget adult drama that is being drowned in an American cinema crowded with bloated blockbusters.  ■

The Rider opens in theatres on Friday, May 4. Watch the trailer here: