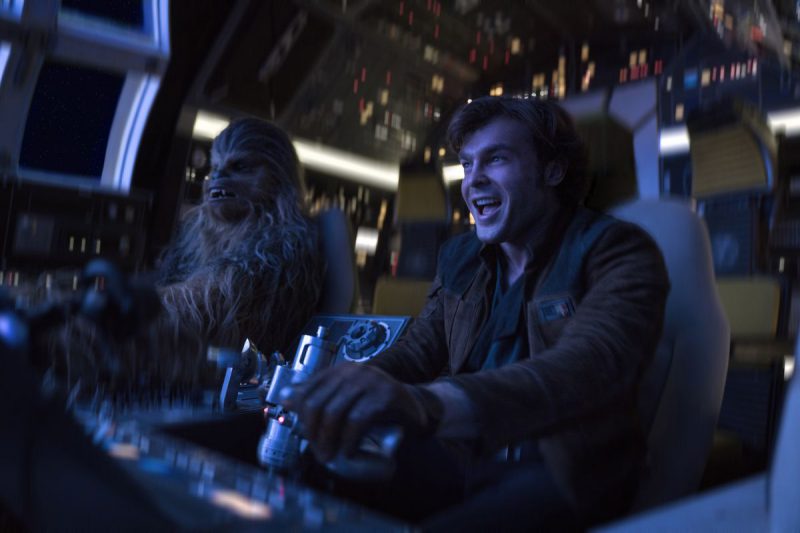 In a perfect world, I’d be able to look at Solo: A Star Wars Story and ignore all of the behind-the-scenes shenanigans. I’d be able to see it as a standalone work, separate from the fact that the original directors were booted off and replaced with Ron Howard fairly deep into the shoot. I’d be able to let the final product speak for itself, away from the many, many articles that have since detailed the production’s problems. I’d be able to assess that the film’s ultimate mediocrity is due to a series of choices rather than one major re-routing.

I’d like to tell you that Solo: A Star Wars Story is an unpolished mess, but it’s not. I have the nagging feeling that the final result would be the same whether or not it was Phil Lord and Chris Miller or Ron Howard in the director’s seat. Though it’s fully competent and even entertaining in spots, it also pinpoints exactly how far you can take this whole prequel / origin story. It identifies in no uncertain terms what the breaking point is.

Han Solo (Alden Ehrenreich) grows up a hustler, forever stealing things and pulling low-level grifts to survive. Determined to shake himself from the crime cabal that employs him and his galpal Qi’ra (Emilia Clarke), he pulls one heist that will draw enough to send them off to a sunnier locale — until he’s separated from Qi’ra at the very last second. He joins the Empire in order not to get caught and meets up with Tobias Beckett (Woody Harrelson) and Val (Thandie Netwon), a couple of similarly motivated grifters that he sidles up to in a classic case of game recognizing game. They almost immediately fuck up a mission that sees them owing big to a slimy crime lord (Paul Bettany) whose second in command actually happens to be the long-lost Qi’ra, who has had to make some rather evil concessions in order to stay alive. Together with Chewbecca (whom Han rescues from captivity at the hands of some shit-ass Empire soldiers), the ragtag team must find a way to repay the slimy crime lord or, presumably, pay with their lives.

Good news for the poopie-panted dorks that felt personally assaulted by Rian Johnson and his attempts to inject The Last Jedi with some originality by moving away from simply tracing the previous films: Solo is an overlong exercise in giving the people what they want, even if it means rehashing familiar scenes from top to bottom and never really expanding beyond the very broad lines of what one would expect from the whole Young Solo thing. Granted, it’s an uphill battle. Any movie tasked with telling this story finds a natural endpoint at the beginning of the first film, which means that the stakes can only really apply to those characters we know for a fact won’t appear later on. (No need to draw you a picture.) Ultimately the film is designed to fill in the blanks about what we know about Han Solo — except that, besides knowing he completed a kessel run in 12 parsecs, not much of it has any bearing on the actual film.

The first act of Solo is particularly egregious in that respect, filled with clunky expositional dialogue and shrouded in cinematographer Bradford Young’s murky, shadowy photography. This first act is so boilerplate and so disposable that it threatens to upend the whole thing. Thankfully, the film picks up around the half-hour mark, though it’s impossible not to see the indelible scars of the film’s troubled shoot at that point. Lord and Miller’s breezy, off-kilter sense of humour survives in some sequences, but they stand in sharp contrast with the more throwaway bits that have seemingly come from the retooled Howard version. Solo is sometimes breezy and hilarious and sometimes aggressively unfunny and workmanlike, particularly in the shading on the edges of the frame. (Jon Favreau voices a six-armed ape sidekick who would rival Jar Jar Binks in terms of scene-stealing irritation if it wasn’t for the fact that he’s in and out fairly quickly.)

What’s ultimately most frustrating about Solo, however, is its desire to tell an epic story where no epic story needs to reside. Solo’s backstory has always remained vague in the other Star Wars films, and it’s interesting to imagine exactly what kind of rapscallionery he may have been up to before — but when it comes down to it, I find myself having very little interest in seeing him whizz around giant CGI beasts and being betrayed three, four or five times by characters I know will have no bearing on the greater timeline. Han Solo’s rakish charm plays fourth or fifth banana to the trappings of the larger Star Wars universe when it should be at centre stage.

Ehrenreich steps into a nearly impossible task here, not only because it’s damn near impossible to capture Harrison Ford’s particular mix of charm and profound grumpiness, but also because the Han Solo character has become a sort of prototype for so many blockbuster heroes. (Without Han Solo, there likely wouldn’t be so many square-jawed Chrises to worry about.) Ehrenreich acquits himself rather well with both the impersonation aspects and with making the character his own, and much of what makes Solo work comes from Ehrenreich and his rapport with the other characters. Solo does a pretty good job recapturing the relationships between Han and Chewbacca as well as Lando (played by Donald Glover, he’s entertaining but underused by a movie that already bites off more than it can chew) and Ehrenreich has a lot to do with how well that’s executed.

No movie is “useful” or “justified” in the grand scheme of things. Even the original Star Wars series that people hold near-religious devotion for was always pulpy and profit-driven, so arguing that Solo: A Star Wars Story is a soulless cash grab is pointless. It does go to show, however, exactly what a superfluous Star Wars film looks like in the Disney era. With such a rich universe to draw from, making a movie that dutifully gives viewers visual proof of what they already expect seems lazy. No matter how competent a whizz-bang space odyssey Solo can be, it’s also about as unimaginative and rote a Star Wars film as there has ever been. It’s serviceable, and I’d much rather feel like the franchise took a shit in my mouth than feel like it fed me my expected gruel. But that’s just me. ■

Solo: A Star Wars Story opens in theatres on Friday, May 25. Watch the trailer here: