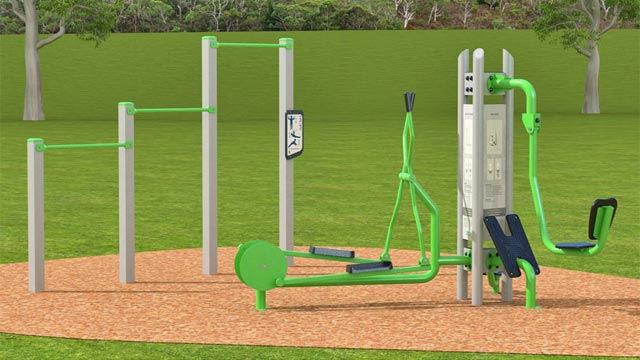 Montreal’s balmy temperatures and long-awaited sunshine are being celebrated citywide this week with packed terraces, densely populated mountain trails and the uninhibited public pull-ups of a man whose sole purpose on this earth is, presumably, to kill.

The man, described by witnesses as physically fit, confident and almost definitely a cold-blooded assassin, was spotted dangling solo from a set of monkey bars in Ville-Marie on Sunday, performing a hanging leg raise in the general direction of a young family while appearing to contemplate his next slaying.

Max, 42, began exercising in broad daylight a decade ago, citing a dislike for the gym, which, it should be noted, involves bass-heavy music poorly suited for planning a murder.

“I really just prefer to be outdoors when I do bodyweight training,” said Max, momentarily abandoning any attempt to pass as human. “I used to always use playground equipment but now there are parks with stuff specifically designed for this, too,” he continued, gesticulating with his hands to give off the appearance of a regular man not at all concerned with homicide. “Who doesn’t love an intense full body workout in a public space?”

Max, whose microfiber sweat towel and fingerless gloves are merely two small parts of what is undoubtedly a large, trendy murderer’s toolkit, says park workouts are ideal for his lifestyle.

“I’m really busy [doing murders], so it works well for me to run to the park before work or after dinner,” he said. “Early mornings are best because I can use the swings to maximize my push-ups,” he went on, the spark of humanity markedly absent from his eyes. “Sometimes I bring a tire and flip it over a whole bunch of times in front of other people,” he continued, “Which is normal and fun.”

The Montreal native explained that while he appreciates group activities such as outdoor boot camps, he prefers to train alone.

“I feel like I can get more done on my own,” he said, likely referring to the sophisticated web of lies he must weave in order to exist among the rest of society.

Max says despite his preference, he’s open to showing others how to maximize public workout spaces.

“I’m happy to be approached for tips,” he said, tightening his gloves and readjusting his sanguinary gaze to the horizon, “Just not during my workout,” he muttered, scanning the area for prey as he lowered himself into a deep squat inches from a picnicking couple. ■