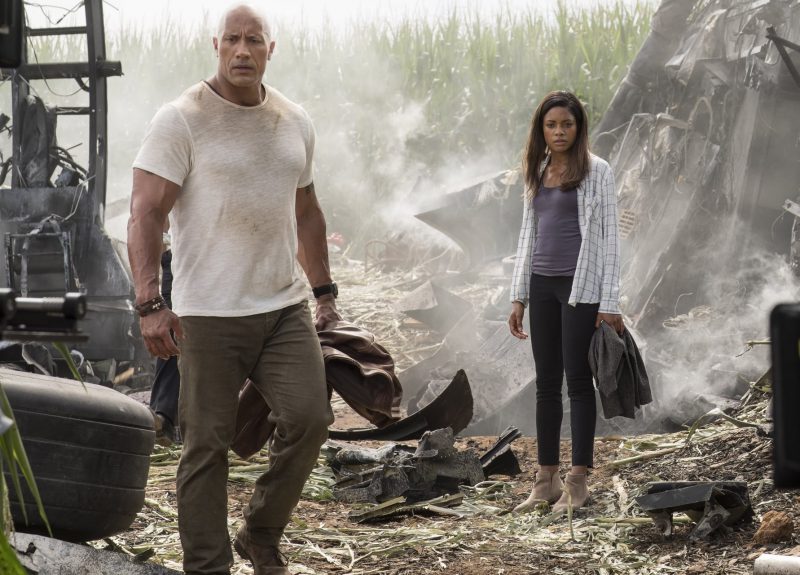 It’s always good to know your crutches as a writer. I know that one of mine rears its ugly head when I’m faced with a perplexing, overstimulated or (even worse) particularly boring blockbuster. My instinct is always to criticize it for not being about anything and treading narrative water in order to prioritize special effects and wanton destruction. Brad Peyton’s Rampage taught me that the problem with those movies is that they’re actually about too much.

Rampage is about as simple as you could possibly expect a movie about giant monsters destroying shit to be; it’s almost spartan in its straightforward delivery on the promise of being a movie about giant monsters destroying shit. It is undeniably stupid, yet it never makes it too obvious how much it knows how stupid it is. In a world filled with over-explained carnage, the promise of a movie that’s distinctly uninterested in what’s below the surface is surprisingly tantalizing.

Davis Okoye (Dwayne Johnson) is a primatologist working at a wildlife preserve in San Diego. Davis is particularly close with an albino gorilla named George whose sign language is advanced enough for them to have inside jokes. One night, a mysterious object crashes into the wildlife preserve and George immediately starts growing. Before long, Davis links up with geneticist Dr. Kate Caldwell (Naomie Harris), who reveals that she designed a pathogen that mutates and links up animal genes. The company that she designed it for sent it up into space to test it, shit went awry and now the pathogen is inside not only George, but a rapidly mutating wolf and crocodile that are barreling across the country to Chicago, where the company’s CEO (Malin Akerman) and her dimwit brother (Jake Lacy) are broadcasting a signal that interacts poorly with the pathogen.

And that’s about the extent of it. The military get involved in the form of a mysterious G-man with a Foghorn Leghorn twang (Jeffrey Dean Morgan) who also apparently has the power of teleportation, but otherwise Rampage has the simplicity of purpose of a Saturday morning cartoon. It’s based on an old arcade game from the ’80s that essentially predates the inclusion of plot in video games, so all that Rampage really promises is that game’s premise: a big ape, big wolf and big lizard destroying buildings. I’m sure a draft exists somewhere where Okoye’s father was the scientist that created the pathogen and his wife left him because of it and there are several personal issues to be solved throughout the carnage, but this version of Rampage does not have that. It has huge monsters destroying buildings.

That’s not to say that it’s well-written, per se. There’s very little character development and at least a dozen well-placed one-liners that fall completely flat. The cartoonish villains are somehow pitched too stupid for even this movie, and the movie literally has nothing to say about anything other than the suggestion that bombing the shit out of a major American city might be a bad idea. None of this, ultimately, really matters  because Rampage delivers on the one thing that it needs to deliver on.

Blockbuster carnage has become so commonplace that I don’t really think I’ve been paying attention to it; either that, or Rampage puts so much attention on its carnage that it finally forced me to pay attention. As a kid, tiny little details were always my favourite part of disaster movies – watching the one guy get flicked out of his car being the popcorn equivalent of a tiny grotesque detail in a Hieronymous Bosch orgy of grotesquerie. Rampage has a lot of that, partially owing to the fact that it operates in fairly organic carnage compared with the glowing orbs and psychic fireballs of superhero movies. Its gleeful, kick-over-the-sandbox approach to destruction verges on the perverse, but it’s also weirdly engaging to see destruction depicted at such a simultaneously micro and macro level.

It would be unfair of me to qualify Rampage as a guilty pleasure or so-bad-it’s-good because there’s no doubt in my mind that it is exactly the movie that they set out to make and the pleasure that I had watching it was very real. It’s never quite clear exactly how much contempt everyone has for the material (if I had my guess, I would say Akerman and Lacy’s overwrought performances turning their whole subplot into something out of Digimon suggests they have a certain level of contempt), but it’s also clear that no one thinks they’re shitting gold here. I hate the idea of checking your brain at the door because critical thought is important no matter how dumb the product may be, but let me make a concession here: you may as well bring your brain in with you to Rampage… you won’t be using it. ■