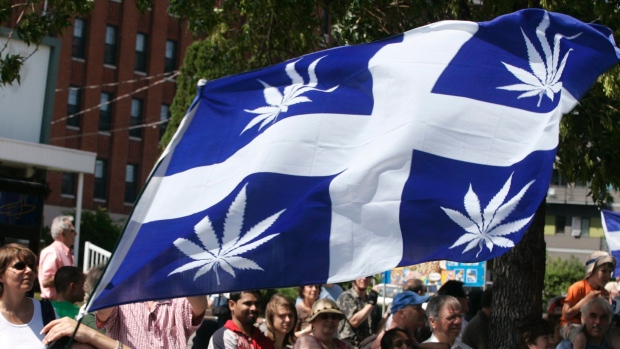 With the legalization of pot in Canada looming ever closer, the provinces of our wild, wild west have chosen to let private enterprise handle the sale of imminently imbibable marijuana products.

Not so Quebec, Ontario, New Brunswick and P.E.I., which have all opted to keep the sales of sativic substances within the cash registers of crown corporations. In our case, that’s the Société québécoise du cannabis (SQC), the fledgling provincial pot purveyor that’s currently being guided on its maiden voyage by its more experienced, alcoholic cousin, the very familiar Société des alcools du Québec, or SAQ.

The decision was in part motivated by the idea that the government’s share of the fat pot pie shouldn’t be limited just to collecting taxes on it, but also through control of its sales outlets. Thus the SQC (really, couldn’t they have found a catchier abbreviation?) will be opening 20 outlets by the time Ottawa fires the starting gun sometime after July, including four stores in Montreal. Within three years, POTBEQ (let’s go with that for now) is slated to open up to 200 outlets across the province, where anyone old enough to vote will be able to purchase a range of marijuana products.

POTBEQ’s parent is being very coy about where the first shops will open up, but the SAQ is widely rumoured to be looking at sites that can tap into the busiest arteries in the city’s transit system at Berri-UQÀM, Jean-Talon and Radisson metro stations, with a shopping centre player to be named later. (Fairview, anyone? Let’s not give West Islanders another reason to feel left out.)

Another four POTBEQ outlets are expected to open up shortly after the city’s pioneer ganja boutiques host their first puff-and-cheese and, given the Projet Montréal administration’s mobility mantra, don’t be surprised if Abbé Lionel Groulx starts spinning in his grave when his namesake station becomes a marijuana Mecca.

But don’t expect to see any maryjaneries anywhere near your local high school or CEGEPs, because even Montreal mayor Valérie Plante seems to have been taken in by the ridiculous notion that proximity encourages consumption among youth.

If that was the case, our churches would be full of young people and Osheaga would be a deserted wasteland.

We’re not talking about sketchy dépanneur owners selling six packs or loose cigarettes to pimply-faced youth here — though there’s surely one near almost every school on the island — we’re talking about unionized, uniformed employees operating under the watchful eye of our Grand Frère government. The hysteria about selling near schools is straight out of Reefer Madness, especially since petty pot dealers have been in our scholastic back yards since, well, forever.

Besides, do they think these kids don’t know how to use their discount transit passes to get to the nearest pot shop?

Anyway, all this to say that — when the authorities aren’t worrying about the sky falling — much thought and planning has been put into finding the best spots to sell something that will sell itself without a lot of marketing help from SAQ.

Unless, of course, they start offering courses in munchie-pairing. Now what goes best with a nice Kooteny Fire, a burrito or a bag of corn chips?

What the government should be worrying about, of course, are things they have largely been ignored. Like the potentially sketchy nature of some of POTBEQ’s new playmates, newly created companies that hope to cash in on legalization by becoming favoured suppliers to the provincial marijuanopoly.

A small team of reporters at the Journal de Montréal were able to discover something that neither the worldly-wise SAQ nor the blunderingly blind Quebec government had realized until yesterday:

Half of the firms Quebec has hired so far to supply its stores are being financed in part through tax havens. These are big names in the burgeoning Canadian cannabis trade, MedReleaf, Aurora and Hydropothecary, and represent 33,000 kg of the 62,000 kg the province has contracted to buy. The Journal says these three companies have gathered nearly $700-million in start-up investments (MedReleaf, $468-million; Aurora, $200-million; and Hydropothecary, $20-million) from  places like the Bahamas, Barbados, the Cayman Islands, Panama and the U.A.E.

These are places where dirty money goes to live it up, where loonies are laundered by the billions along with euros, pounds and profits from thousands of companies — many Canadians among them — that don’t want to pay taxes at home. How ironic that money that has been kept from the public purse could be coming home once more, this time to profit from partnerships with a government monopoly.

One of the goals of legalizing marijuana was to get criminal enterprises out of the business of selling pot. The Quebec government needs to adopt strict rules and ensure vigilant oversight of all pot-related commerce, or else we risk letting a new set of criminals in through the back door. ■