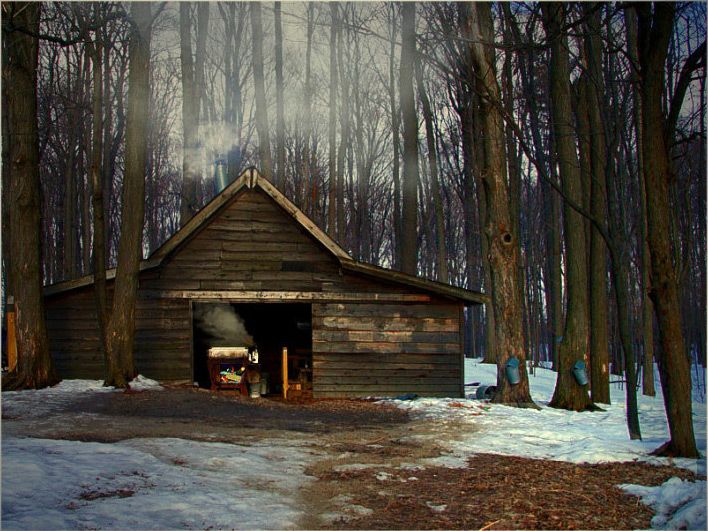 A recent poll has revealed that despite a growing sentiment of pure, unfettered hopelessness, Quebec Millennials are unanimously enthusiastic about enjoying a variety of delicious maple products, quality time with loved ones and the warm glow of denial as society continues to crumble around them.

Quebec’s sugar shacks have become a millennial magnet in recent years thanks to new offerings such as vegan menu items, which gives 20- and 30-somethings the opportunity to enjoy guilt-free artisanal comfort fare and a much needed endorphin blast to stave off the cold realization that this entire confectionary paradise was stolen from Canada’s indigenous peoples. Most cabanes à sucre still offer traditional menus for those who prefer to drown the palpable awareness of Canada’s overt systemic racism in a bowl of chopped up hot dogs.

While carb-heavy delicacies are an obvious go-to for temporarily forgetting the fact that they’ll rent until death, many millennials are taking advantage of the other attractions served up by these rustic oases. Some have small wildlife parks, where young professionals can simply look at wolves instead of wandering blindly through the frigid existential chasm where intimacy once lived. Others boast evenings of Québécois folk music, where stomping feet and wooden spoons can drown out the vast majority of toneless inner screaming and upbeat fiddle reels will neutralize the most bloodcurdling of global warming statistics. One sugar shack even has bumper cars, offering guests the chance to repeatedly slap their own brains against the insides of their skulls until they can’t think about gun violence anymore. Also taffy!

In addition to hearty food and quality entertainment, cabanes à sucre allow millennials to advertise to the world how fun and well-adjusted they are whilst spending the day with a friend group comprised of at least two previous sexual partners per person. Quebec’s picturesque countryside provides the perfect backdrop for standing next to Thomas and being totally fucking fine with it as one consumes enough natural sugars to not need love anyway.

Some sugar shacks provide their own photo booths, offering fun props such as paper beards and toques so patrons can pretend to be someone else, anyone else, anywhere else for just a moment.

Though Quebec’s maple sugar cabins present endless possibilities for fun, no activity is more popular than the famed sugar coma, attracting thousands of young adults each spring with the promise of delicious handmade treats leading to a significant medical event. Though often viewed as a spoiled, oversensitive generation, the popularity of the cabane à sucre is a testament to millennials’ core values of supporting local businesses, maintaining tradition and calorie-blasting until the capacity for critical thought is medically unlikely. ■