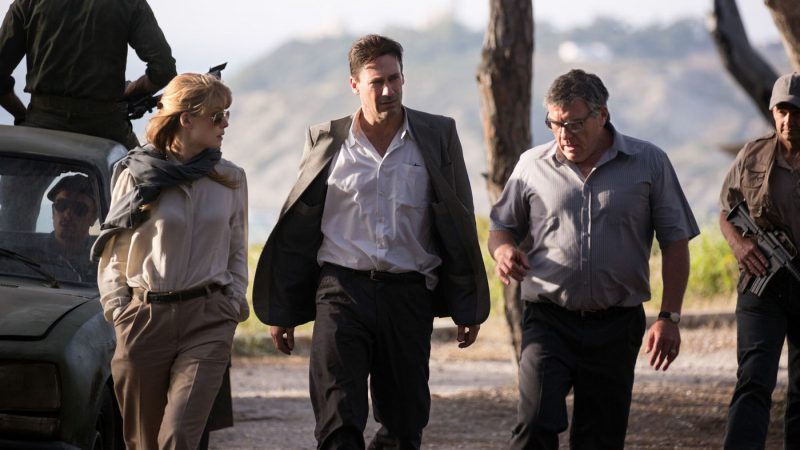 As much as I hate the idea of judging a movie by its poster / trailer / marketing materials, movies like Beirut make it damn near irresistible. You don’t need to know much about this movie – only that it’s an ’80s political thriller set in Lebanon that stars Jon Hamm and Rosamund Pike – to start enumerating the things that you will undoubtedly see in it:

1. A non-negligible amount of sideburns and mirrored aviator sunglasses, often paired on the same face;

2. A beloved character actor in a supporting role who seems weirdly underused until roughly 60 per cent of the way;

3. A troubled hero who always drinks brown booze that he pours into a glass, even if the situation calls for a drink straight from the bottle;

4. A scene in which some sweaty dudes roll up their shirtsleeves and yell at each other in front of a computer or radar screen;

5. A scene of the cool hero coming out of a helicopter while a period-appropriate and blindingly obvious music cue blares (anything from AC/DC will do);

6. Almost no important characters being from the foreign – and most likely dusty – country in which the film is set;

8. Just enough backstory or flashbacks so that when there is a big reveal, it is thunderously obvious who this mysterious character is because it was literally the only character in said flashback or backstory;

10. A moody flute and oud-based score, probably paired with one of those landscape shots of the sun setting where the light distorts the horizon;

11. Someone that says “Welcome to Beirut” in a wry, knowing tone that suggests you are, in fact, not at all welcome in Beirut (this actually happens twice in the first 20 minutes).

To Beirut’s credit, not all of those things are found in its 109-minute running time. To its discredit, it is otherwise exactly that type of movie in every respect.

Mason Skiles (Hamm) was a powerful American diplomat in pre-revolution Lebanon until a violent event in his home took his wife’s life. Ten years later, he works resolving labour disputes in the Boston area, drinking heavily to bury the trauma of his past. He’s not particularly interested in going back to Lebanon, but he’s not given much of a choice when an old pal (Mark Pellegrino) is taken hostage and the CIA (personified by a no-bullshit agent played by Rosamund Pike and three State Department dorks played by Shea Whigham, Larry Pine and a terrible-wig-afflicted Dean Norris) backs him into a corner. As it turns out, Skiles and the people who took said old pal have some ancient history that’ll inevitably come bubbling up to the surface.

Beirut is one of those political thrillers in which all of the politics seem more or less like interchangeable fluff. No matter what the specifics are (and I have no reason to doubt that Tony Gilroy did his homework here), it seems this kind of movie (which is also exemplified – to varying degrees of success – in things like Syriana, Green Zone and the not-even-set-in-the-Middle-East Sicario) essentially boils down to “trust no one, you’re always in danger, you’re not welcome here… welcome to Beirut.” Those worrying that Beirut puts forth a reductive and simplistic vision of the Lebanese Civil War will be vindicated but also kind of proven wrong; real-life politics barely factor in this at all. It could be anywhere, at any time.

Director Brad Anderson has always had a pretty deft touch with sometimes decrepit or familiar material. He’s the rare kind of journeyman director who has stuck mostly to genre films (and never once been in the running for a Hunger Games sequel or some similar thing, to my knowledge, though he has worked in TV a whole hell of a lot) without necessarily developing a hook besides delivering a kind of elevated B picture. He has a doozy to work with here: Gilroy has apparently has this script kicking around since 1991, and its familiar beats hearken back to a time when yelling exposition about Yasser Arafat and the PLO immediately bumped a film up into a new stratosphere of perceived maturity.

To Anderson’s credit, almost all of Beirut’s qualities come from his skirting of the screenplay’s most formulaic elements. There’s nothing he can do for the countless scenes of people laying out plans in a sweaty control room, but he does manage to keep the corny stylistic flourishes to a minimum, heavily downplays the film’s ’80s setting (only the bad pants and a handful of dumb haircuts remain) and keeps things running at enough of a pitch that the film feels efficient, if not exactly anxiety-inducing. He manages to get decent performances from Hamm and Pike (who spends a lot of the movie barking orders in French) but, ultimately, Beirut never transcends the very obvious limits of its screenplay. It never even matches them. As much as I would like not to judge it by its cover, the cover has to hustle a little bit, too. ■