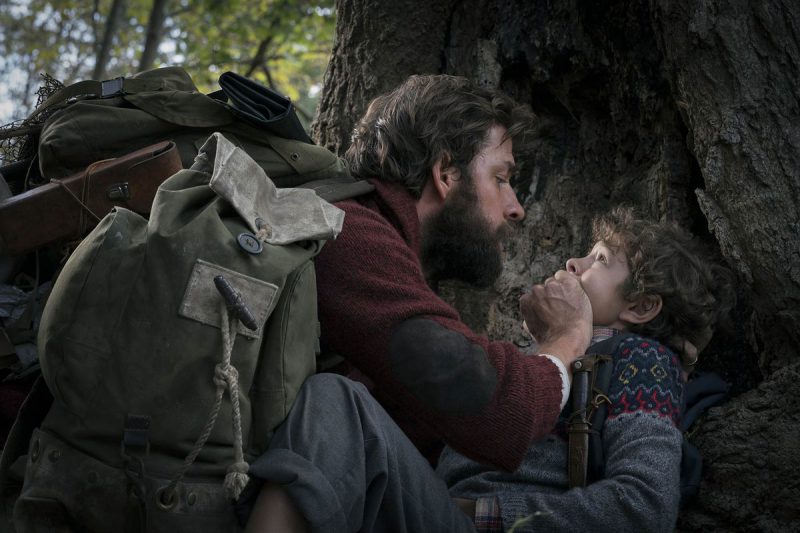 John Krasinski and Noah Jupe in A Quiet Place

There is a famous painting by 20th-century artist Francis Bacon called “Study after Velázquez’s Portrait of Pope Innocent X.” The 1953 image features the Pope in a silent, primal scream. Trapped in darkness, his features and even his body seem fractured by sound – yet the nature of the still painted image means that he remains in silence. Bacon has said of this painting, as well as others that feature this kind of open-mouthed scream, “I wanted to paint the scream more than the horror.”

A Quiet Place opens 89 days after a catastrophic event that has decimated humanity, leaving long-limbed monsters with kaleidoscopic faces who rely solely on sound to prey on what’s left of our species. As the film opens, two parents and their three children scavenge for medicine and supplies in an abandoned town. Before we are even aware of the monsters lurking in the woods, the atmosphere of cautious silence adds a deep sense of uncertainty. John Krasinski (who stars but also directed) has a huge amount of poise and confidence. Integrally, he takes into account the audience as a player in the film’s horror, drawing out the noise from the room as each handful of popcorn and cough in the cinema feels amplified to the point of making the audience culpable in the onscreen family’s suffering.

Most of the story takes place over a year after the creatures first arrived and the characters have settled quite comfortably into a routine where danger has been largely minimized. The mother, Evelyn (Emily Blunt), is in the last months of her pregnancy and the family prepares for the first screams of life – an altogether new and frightening challenge.

Structuring the film around this pregnancy gets to the heart of the intimacies of the film’s horror. While a lot of horror films focus on dysfunction, this one showcases humanity’s ability and desire to survive, as it refocuses horror on the innate fragility of human life. The natural rapport between Krasinski and his real-life wife Emily Blunt feels experienced and complex. They rely on each other for safety and comfort, but also shoulder shared traumas that threaten the happiness of their household. The realness of this love affair, coupled with the film’s silence, which very consciously seems to implicate the audience in the horror, makes for an emotionally wrenching experience.

Yet, for all of the film’s strengths, there are still some cracks in my confidence in the film. There are aspects of the physics of the creatures, in particular when and how they understand sound, that feels conveniently vague. Audiences who don’t get drawn in by the film’s craft and emotional heart will easily pick apart aspects of the narrative that don’t quite make sense. The film requires some pretty big leaps of faith to maintain the aura of illusion during some sequences, and requires a strange kind of optimism that allows us to accept at face value that this couple would be happy to welcome a new child into this particular world. If you’re predisposed to that kind of romanticism, this can also be seen as one of the film’s major assets.

A Quiet Place is among of the most remarkably effective horror films to come out in the past few years. It is gripping and tense, while also offering some rather poetic reflections on mourning, love and family. It has a few of the scariest moments in recent memory and Krasinski completely disregards the idea that less is more when it comes to showing monsters; the creatures never really lose their creep factor, which is an accomplishment in and of itself. This is the horror film to beat this year, and it sets a pretty high bar for all genre films that follow.  ■

A Quiet Place opens in theatres on Friday, April 6. Watch the trailer here: