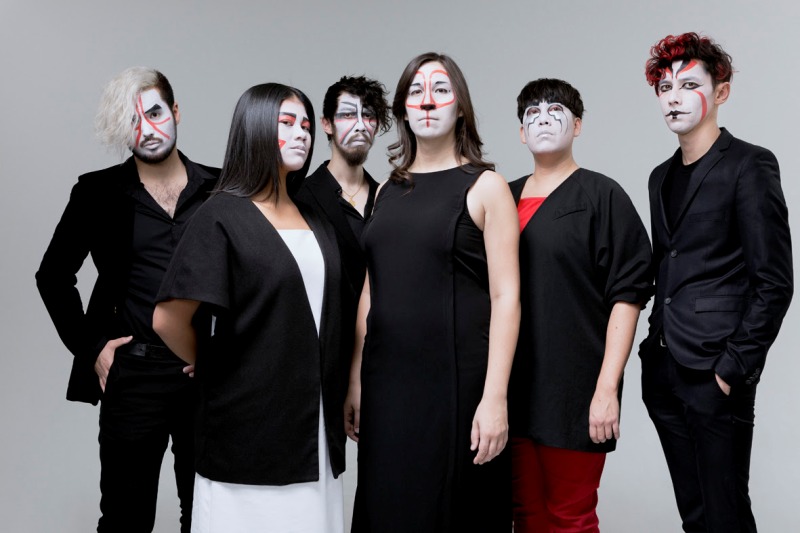 Having started out as a performance art project at Concordia, Yamantaka//Sonic Titan tends to signal a larger event than your average night at the rock club. Because of their rigorous touring schedule, the band’s Escogriffe show in Montreal this week might be a bit tamer than their larger scale installations or theatrical works of the past, but this doesn’t mean that YT//ST isn’t bringing high concept to the table.

As drummer and co-director Alaska B describes, their latest album Dirt takes on the current approach to climate change while bridging the Asian and Haudenosaunee identities of the band’s members.

“Dirt is supposed to be the soundtrack for an unreleased animé at the turn of the ’90s — the straight to video era. Dramatically, it’s on the whole Haudenosaunee creation story of the Skywoman falling down from Skyworld and landing on the back of a turtle in which a bunch of animals try to get soil from the bottom of the ocean in order to survive on its back.”

“So, the concept is people live in a sky-city after the flooding of their planet who then send a doomed expedition down to the bottom of the ocean in order to retrieve the last sample of arable soil from an exodus ship.”

Taking in the modern political climate, Alaska sees the mission as emblematic of humankind’s belief in last ditch scientific developments, rather than a change in lifestyle or environmental approach.

“The people who flooded the planet in the first place thought that the technology or culture that flooded it would also contain the ability to save it,” she says, comparing it to geoengineering. “The pollution that we make is what’s causing climate change so if we just blast the air with more chemicals, that’ll just fix everything.”

In approaching the songs, the group was linking pieces and characters of the story to a sonic mood. “Every single song is thematically linked to a part of the story or a character so each song reflects that character’s energy.” Single “Yandere” is thrashy and sharp to represent the animé trope of a character so in love they’re willing to resort to violence.

Another influencer on their musical approach was their score of the indie video game Severed.  Being involved since day one, the group wasn’t given full creative freedom, but they were very much offering their opinions on the game’s development as they worked to craft its musical environment.

“It taught us two different things: Longform writing that is not related to a pop music cycle and not just open, it has to serve a function; also, how to integrate the abilities and sounds of so many different musicians.”

“I think it shines through in Dirt in kind of a backwards way where you wouldn’t expect it. There’s more lyrics than on our first two records combined and all the songs are shorter, faster, straightforward because we spent two years working on a soundtrack that was super spread out.”

Yamantaka//Sonic Titan remains relentlessly creative and conceptual, but they also don’t get bogged down when it comes to the listening experience. Dirt is all of these influences and concepts filtered into a tight and powerful 42 minutes, sure to lead to an energetic night of rocking out in the city that the band (now based in Toronto) still hold near and dear to their hearts. ■