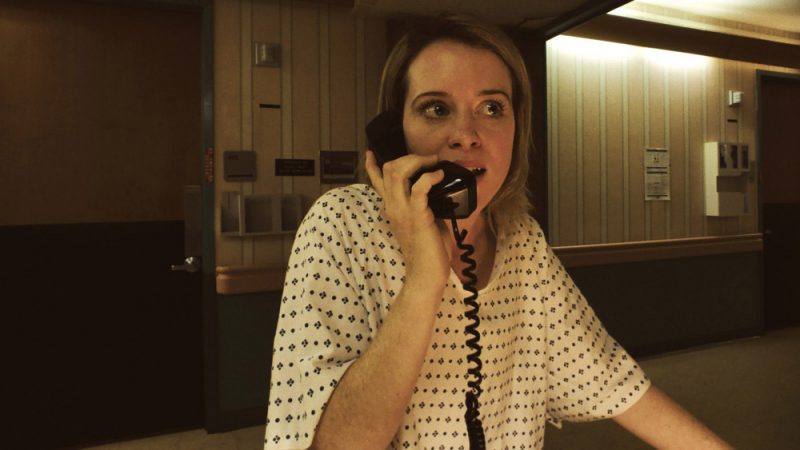 When Steven Soderbergh returned from his short-lived hiatus a couple of years ago and announced that he was only going to make audience-pleasing, commercially oriented material from now on, few suspected that he would suddenly make it on the shortlist for another Harry Potter or 50 Shades of Grey movie. Though Soderbergh has made some explicitly experimental films in his day (Schizopolis, Bubble, The Girlfriend Experience), he has more often than not worked in fairly straightforward Hollywood modes. He has always, for lack of a better term, seemed “up for whatever” and this new declaration simply suggested that “whatever” no longer extended to obtuse no-budget movies starring non-professional actors.

Soderbergh returned from his hiatus with Logan Lucky, a movie that I absolutely love but is pretty straight down-the-middle in that sense; Unsane certainly seems more adventurous on paper. The Soderbergh film that it has the most in common with is Side Effects. Like that film, it winkingly and studiously adheres to genre codes from the first second to the last. Unsane is undoubtedly pulpy and derivative, but it’s not even a case of Soderbergh wanting to turn the genre on its head or poke holes in it. It’s almost as if he’s testing himself to see if he can follow through on DTV-level horror without it ever feeling like it’s a joke.

Sawyer Valentini (Claire Foy) has just moved across the country and started a new job to get away from a stalker who poisoned her life back in Boston. Still haunted by his presence, she seeks help with a local institution and winds up involuntarily committing herself to a vague treatment program. (It’s intimated that the program essentially cons people into checking themselves in and holds them until insurance pays off — this unsubtle jab at the healthcare industry also doing its part to pair Unsane with Side Effects.) Inside the institution, Sawyer quickly makes enemies, with only Nate Hoffman (Jay Pharoah) being seemingly sympathetic to her plight. As she begins to face the fact that she may be in the institution for longer than she could have imagined, even worse news strikes: her stalker (Joshua Leonard) has gotten a job as an attendant in the very same institution. Or has he?

It’s not just Unsane’s premise that feels ripped out of the Cinemax circa 1992 playbook — the whole thing unfolds in the broad strokes of an early ’90s psychological thriller, complete with oversimplification of mental health issues, stock supporting characters (a “crazy” girl in dreadlocks that once upon a time may have been played by Angelina Jolie but this time is played by Juno Temple) and a violent third act that perhaps has more in common with the early 2000s torture porn era. The screenplay’s many twists and turns, though expertly handled, all more or less feel right out of cheapy DTV shlock. All of this, of course, is intentional — it’s as if Soderbergh willingly picked a rote screenplay to give himself the most even playing field.

As you may suspect, a hacky thriller directed by Steven Soderbergh starts off on quite a different foot than your average DTV slice-and-dicer. Soderbergh uses the iPhone to give the whole thing a queasy, bleached-out look, pairing the phone’s limitations with the unnatural, neon-soaked natural light of its locations to create a distinctive look. It’s not always a great-looking movie, mind you, but it’s always a distinctive-looking one. The apex of Soderbergh’s experimenting with style happens towards the end, in a bravura sequence in a padded room (!) where the camera keeps spinning around the protagonist. The iPhone, clearly not equipped to handle such movements, begins “quivering” (for lack of a better term), giving the whole scene an anxiety-inducing and slightly nauseating sense of movement. It’s interesting if not exactly revelatory (Sean Baker already proved this could be pulled off with Tangerine, after all), but the use of the iPhone does see Soderbergh get pretty playful with the form.

It’s for moments like this, I think, that Soderbergh made Unsane. As a prodigious consumer of media, Soderbergh is making films that are arguably as referential and reverential as someone like Tarantino, but his approach is very different. If Unsane could be tagged as experimental, it would be in its function rather than its form. Though Unsane is never boring in the traditional sense, the ideas it puts forth are. I struggle to think of anyone — even Brian DePalma — who could make this kind of dog-eared material leap off the page, and I have to imagine that’s the kind of Sisyphean ordeal that Soderbergh is into in this so-called commercial stretch of his career.

As interesting as it is to watch, Unsane barrels towards a fairly conventional and familiar conclusion and ultimately doesn’t have much to say about anything. It’s a movie that exists almost as a personal test, as an attempt to see if the author can work in a purely commercial vein without fully thumbing his nose at it. He can, as it turns out, but it doesn’t mean he should. ■