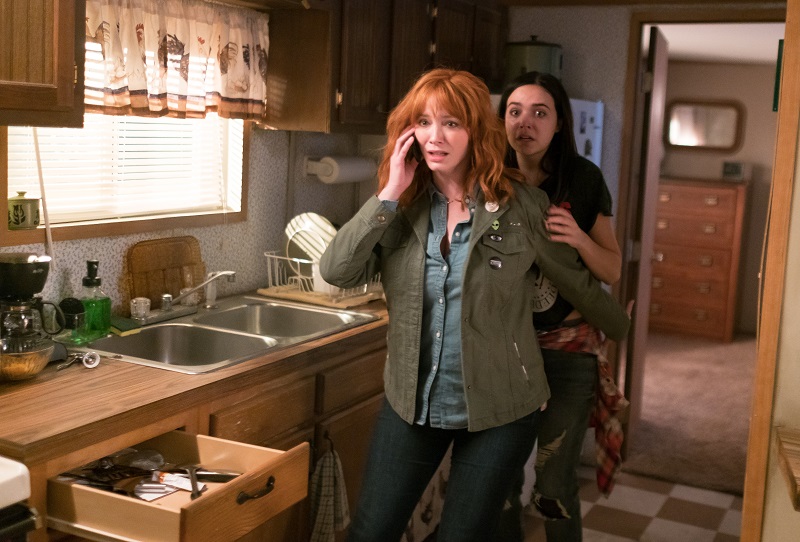 Christina Hendricks and Bailee Madison in The Strangers: Prey at Night

Horror trends move so fast that most breakout horror hits are anticipatory rather than participatory — chances are that if a film is riding a wave, it’s already too late. Bryan Bertino’s The Strangers was a hit partly because it came out of a period where supernatural horror had a surge of popularity, and The Strangers offered anything but supernatural horror. The premise of the original Strangers is so pared down (three masked creeps terrorize a couple) that it may as well have been released with a yellow no name brand poster with the word HORROR stamped across it. Even if it didn’t really do anything new with the home invasion genre, it conquered it with a singularity of purpose that many found refreshing.

On the flipside, there’s something a little sweaty and desperate about The Strangers: Prey at Night, the 10-years-in-the-making sequel to a film that, by virtue of being so simple, has already bred dozens of unofficial sequels, takeoffs, parodies and rip-offs. You can hardly argue that “a family is attacked by masked assailants” is a concept owned by any one film, and yet The Strangers: Prey at Night manages to feel superfluous and repetitive. In fact, the entire film is besieged by the feeling it was conceptualized backwards, whittled and carved into a horror movie from a handful of stray ideas that may or may not lend themselves to become a sequel to the world’s simplest horror film.

Cindy (Christina Hendricks) and Mike (Martin Henderson) have decided to put their unruly teenage daughter (Bailee Madison) in boarding school. They’ve also decided to stop for the night (along with their jocky son Luke) in a trailer park owned by Cindy’s uncle Marvin. The trailer park is supposed to be deserted in the off-season, and yet the family is almost immediately approached by a creepy girl looking for Tamara. Tamara, of course, doesn’t live there – and the whole family’s not likely to live anywhere at all if the three creepy masked strangers running amok in the camp have anything to say about it.

The Strangers: Prey at Night seemingly revolves around two setpieces that have piqued director Johannes Roberts’ interest: one neon-soaked poolside encounter that’s certainly in no way, shape or form inspired by a vaguely similar sequence in It Follows and another in which a character is quite literally assaulted by a flaming truck. These sequences give the film its only spark, as if they were conceptualized of first and the rest of the film simply created in order to give those two scenes a structure. On one hand, I appreciate the film’s almost complete dismissal of backstory in the service of thrills; on the other, this may just be a lie I tell myself to somewhat justify a horror movie that treads water for almost an hour until a car catches on fire.

Roberts certainly isn’t untalented. He manages to brew up some atmosphere here and there even though his use of janky and unnecessary zooms rivals Altman in the ’70s (back when you could at least argue that the technology was a new and exciting plaything). Unfortunately, it all goes to serve woefully underdeveloped characters and cheap jump scares a-plenty. A premise this minimal leaves very little space for error, but it’s not particularly relentless or gripping.

Perhaps most egregiously, The Strangers: Prey at Night isn’t about anything. It more or less removes the original’s tenuous “you’re never safe, even when you’re the safest” theme (they’re not home, after all; they’re in a creepy abandoned trailer park, which is really in the top three of places you’re most likely to get murdered by a hammer-swinging maniac) and instead trades in some garden-variety horror movie nihilism. (The original’s “because you were home” is replaced with an even more cheerfully nihilistic and kinda meaningless bon mot this time around.) I have no problem with brutal horror movies, but at least vaguely pretend they’re about something. Almost everyone else manages to pull it off.

I was a teenager in the post-Scream era when no one was apparently really sure how much self-awareness a horror movie should have, thereby leading to straight-faced sequels to ostensibly satirical horror movies and other random one-offs that straddled the line between being a metatextual clusterfuck and making easily startled teenagers scream. The time of Valentine, Urban Legend and I Still Know What You Did Last Summer was not a golden era of horror. Consequently, these types of films have not endured.

The Strangers: Prey at Night reminds me a bit of that type of horror movie: apparently aware of what it was that worked in the first one, but totally clueless about how to apply it this time around. Just because it looks like The Strangers, sounds like The Strangers and has the same creepy doll masks from The Strangers does not really make it The Strangers. Piggybacking on a popular franchise with something tenuously related has been done before, but it’s rarely done with this sort of determined blandness. What’s in a name, anyway? ■

The Strangers: Prey at Night opens in theatres on Friday, March 9. Watch the trailer here: