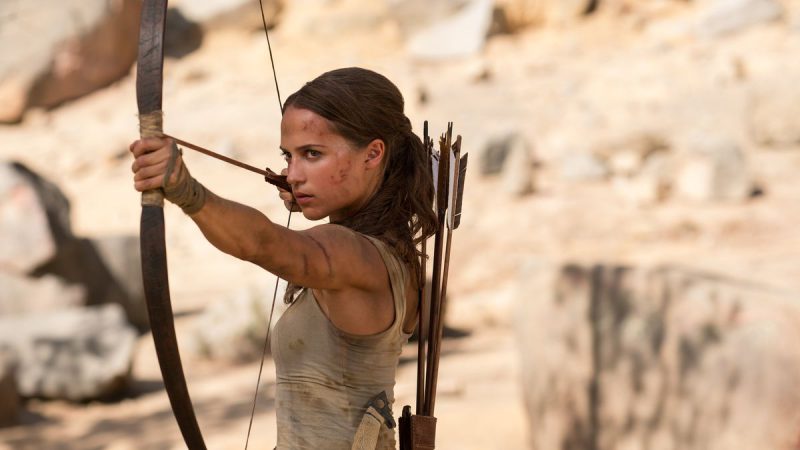 The problem with adapting video games to the silver screen — particularly super-iconic ones from two or three decades ago — is that they’re video games. In its infancy, the medium didn’t allow for much narrative, so you got a couple of lines in the manual or at the start screen to give you a so-called sense of purpose. As technology progressed, so did storytelling, but very often film informed video game narratives heavily. That puts the makers of a Tomb Raider feature film in an almost unwinnable situation: how do you make an interesting movie from a premise that’s basically Indiana Jones in hotpants without actually going out and making Indiana Jones in hotpants?

Director Roar Uthaug and the rest of the team behind this new iteration of Tomb Raider have opted for a more grounded approach — a significantly less pneumatic Lara Croft, for one, though she can still jump prodigious distances, but they’ve also opted for the most dreaded phrase in the current film landscape: origin story. I guess it’s inevitable that the studio smelled the franchise bacon grilling. Though it’s hard to believe that there’s really much to be mined from the Tomb Raider franchise, this most recent effort proves there’s very little to take from the tale of how young Lara Croft first started raiding tombs.

Lara Croft (Alicia Vikander) is heir apparent to the prodigious Croft fortune that her father (Dominic West) has left her since disappearing in the jungle when she was in her teens. Lara is reticent to claim said fortune, however; signing the papers would essentially declare her father dead. Instead, she’s slumming it as a London bike courier when a meeting with her father’s second-in-command (Kristin Scott Thomas) reveals clues that instead lead her to a remote island in the Pacific ocean where her father might hide — but where a corporate stooge (Walton Goggins) gone mad with power definitely resides.

It wouldn’t be an origin story without a hidden underground and unresolved daddy issues governing our protagonist’s every decision. In that sense, Lara Croft has much in common with our boy Batman. Although far from being a dark and gritty reboot in the traditional sense, this particular iteration of the character is surprisingly dull, taking a little bit of James Bond, Batman and Indiana Jones and wrapping it in Croft’s trademark turquoise top. Even for an adaptation of a 20-year-old video game, Tomb Raider’s script takes stunningly few chances, delivering a by-the-numbers adventure flick that’s obsessed with setting up all this backstory that is in no way necessary to enjoy a little bit of the old tomb raiding.

The Tomb Raider games are interesting in that they weren’t exactly full-on action games, taking advantage of what was then brand new technology to add a whole lot of jumping, climbing, swimming and puzzle-solving to the usual run-and-gun action. Uthaug and the screenwriters do a very unusual thing here and adapt the actual action mechanics of the game to the film. I’ve rarely seen a video game movie that actually applies more than just the plot to the silver screen, but Tomb Raider is surprisingly literally about adapting the game. Lara does a bunch of puzzles, matching different-coloured stones, solving riddles and turning big stone wheels around to make patterns exactly like in the game. It’s kind of silly but also admittedly novel and honest on the filmmakers’ part: when you adapt a video game, adapt a fucking video game. Same goes for the action scenes, which are refreshingly free of explosions and even guns; Croft instead uses a bow and arrow to do her bidding.

Vikander acquits herself well in a role that requires different muscles (acting and literal) than her usual work. She’s a commanding presence even within the limited scope of a movie where she’s always falling off of things and hanging off other things. There’s no amount of charisma, however, that can really make this thing lift off the page. The Angelina Jolie Tomb Raider movies weren’t very good, either, but at least they had this sort of cartoonish patina. This Tomb Raider takes itself very seriously, and although a very serious actress does a commendable job in a passably serious role, none of it ever adds up to much.

That having been said, so much of Tomb Raider comes across as tedious paperwork to prepare an eventual franchise that I’m not adverse to seeing continue. Vikander is great and the movie ends on a note that suggests the series is headed down a path that has more to offer than sad dad reunions and a deserted island. It would be nice to have a blockbuster series that doesn’t rely almost entirely on explosions and swirly CGI baddies rising from crypts, but this first try is almost spectacularly uninspired. ■