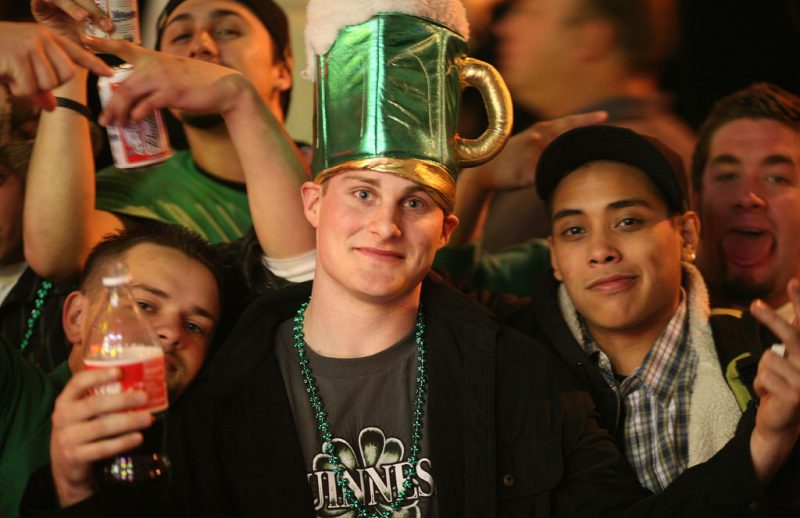 With St. Patrick’s Day just around the corner, a group of McGill students has drawn up an itinerary chock full of fun activities, youthful merrymaking and spit-screaming at the top of their lungs directly into the souls of all who pass.

The group of second-year accounting students, spearheaded by alpha power couple Taylor and Alex, has spent months lovingly assembling a list of their favourite Montreal establishments in which to wildly shriek their opinions on the Greek debt crisis whilst revelling in the festive glow of traditional Irish cocaine.

In addition to classic St. Paddy’s Day pastimes such as James wearing comically oversized sunglasses and Amber having a total fucking meltdown, the friends hope to take this year’s celebration to the next level by incorporating some unconventional elements into the plan.

“I’m totally putting a green streak in my hair,” said Taylor, 20, pausing for a moment to allow her statement to sink in. “Semi-permanently.”

The exuberant bunch of young scholars plans to commemorate the arrival of Christianity in Ireland with a drunken pilgrimage to the mecca of Irish culture and heritage: Dollarama.

Alex, 21, whose ancestors emigrated from Ireland to escape famine, is passionate about displaying his lineage through traditional Celtic dress.

“If they’re out of leprechaun beard-hats I’m going to punch someone in the dick,” exclaimed Alex, putting the finishing touches on his homemade Blow Me, I’m Irish t-shirt.

Taylor and Alex, referred to solely by themselves as Talex, plan to honour the Feast of St. Patrick with a walking tour of the city’s finest pubs, carrying the spirit of the day with them as the entire group of 12 cleverly shouts “Irish Car Bomb” every time they consume an Irish Car Bomb.

Like all good leaders, Talex understands the importance of leaving room for spontaneity.

“We didn’t want to plan every single minute of the day,” explained Taylor. “Some of the best moments happen when you go with the flow, which is why we’ve set aside some time to just kinda wander up and down the sidewalk during rush hour.”

“I think people really love seeing us all dressed up having a great time,” said Alex, who spat a piece of shawarma into a woman’s eye while yelling “cocksucker” at last year’s parade. “It honestly just feels good to brighten someone’s day.” ■