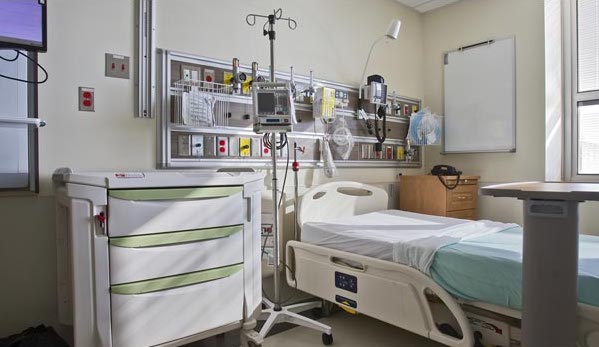 Next week marks the first anniversary of the day I could have died. If I had been living in Trump’s America, there’s a pretty good chance I would have. Because even though the U.S. spends more money on healthcare per person than any other country in the world — twice as much as Canada!! — most of that spending goes to enrich the bloodsucking leeches of U.S. healthcare capitalism.

As I lay in my hospital bed recovering from a dangerous brain-stem stroke last March 8, I couldn’t help thinking about how screwed I’d have been if I’d been born just 100 kilometres farther south. As a freelance worker, the chances are slim that I’d have insurance. Even if I did have insurance, it would no doubt be the discount package. Actuaries and accountants would have calculated the level of care I deserved, which tests “I” could afford and how long I could stay before I either had to mortgage my nonexistent house or leave the hospital.

“Take two aspirins and some Plavix and call me in the morning … if you get better insurance,” Dr. Profit would say. “IMHO (In My Health Organization), we provide the best affordable care, providing you can afford it.”

I spent eight days in the Jewish General Critical Care pavilion last March. Eight days of extensive and expensive tests to determine what caused the stroke, how much damage it had done, and whether my body was hiding some other ticking time bombs. Luckily, the answer to the last two questions was “not much” and “no.” In terms of physical symptoms, the biggest “deficit” was that my coordination was a little off. The doctor would ask me to touch my finger to my nose, and I kept missing.

The answer to the first question — what caused the stroke — was a little more frightening. It turns out that a critical artery that feeds both the left and right hemispheres of my brain had narrowed over the years, and my stroke had likely been caused by bits of clot getting stuck in the pipe, briefly cutting off the blood supply until the detritus worked itself loose. People who suffer blockages in that artery often die from it, but even more frightening to me was learning that these basilar artery strokes can also lead to “locked-in syndrome,” where the victim is completely aware of everything going on around them but can’t move or talk.

I’ve always been claustrophobic. My worst nightmares were about being trapped in a vent or a sewer where I could barely move my arms and legs. I could inch forward but not back, and I had no idea how far ahead any exit — if there was one — might lie. Even in my dreams, I think the panic is going to kill me long before thirst or hunger ever will.

Locked-in syndrome, as you can imagine, seems immeasurably worse.

Jean-Dominique Bauby, editor of France’s Elle magazine, was in the prime of his life and career when he had a massive basilar-artery stroke in 1995. He was completely aware of his surroundings but unable to move a muscle except for his left eyelid. We know this because, astoundingly, the 43-year-old was able to write a book about it. With the help of a therapist, over 10 months he dictated his memoir The Diving Bell and the Butterfly, one letter, one blink at a time as an assistant repeatedly read through a frequency-ordered alphabet while he moved his left lid whenever she voiced the letter he wanted to use.

The average word took two minutes to compose, so this sentence alone would have taken more than half an hour.

Bauby never recovered and died two days after his book was published.

In the end, it was literally a lucky stroke that my attack happened as it did. Now that we’re aware of the blockage, called a stenosis, I’m on medication that should significantly reduce the chances of the pipes getting clogged again. I’m also much more aware of the warning signs of a stroke, which I completely ignored last year, even as the first mini-stroke hit and I lay partially paralyzed on the floor of my apartment office.

I’m also lucky, as are most of Cult MTL’s readers, thanks to where it happened. Lucky that we live in a society where very few people go bankrupt paying for essential, basic medical care. For sure it’s still a very flawed system, with way too many demands placed on overworked nurses and technicians and orderlies. We have a Quebec premier and a health minister who are both doctors but whose treatment of the system is leaving untold thousands of health workers so stressed that they, too, are falling ill.

Are we paying our doctors too much? Well, like any profession, some are paid way too much and others nowhere near what they deserve. But while we complain about giving doctors raises, we should also be thankful that at least the Canadian system isn’t simultaneously being bled dry by corporations whose raison d’être isn’t patients but profits.

At least here, we can scream and shout and demand change, as protesters did Saturday, calling for the resignation of our horrible health minister, Gaétan Barrette. It’s our system, after all; we’re both users and shareholders, entitled to have a say in how it’s managed and who gets to call the shots.

So let’s save our sympathy for our neighbours to the south, whose medical system — like the country’s gun control policies — is trapped in a nightmare locked-in syndrome of its own, where even tiny movements like Obamacare can disappear in the blink of an eye.