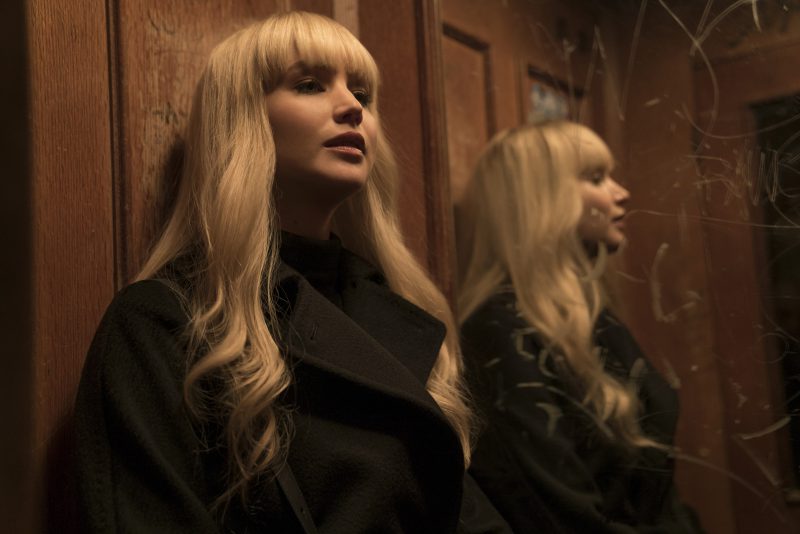 Francis Lawrence’s (heretofore known as “the director” to differentiate him in the text from the star) Red Sparrow dispels that notion somehow. In 1992, a 140-minute sexy espionage thriller starring the world’s biggest female movie star would have been an immediate box office smash. In 2018, it feels like a distinctly uncommercial prospect, a seemingly purposely alienating and leaden-paced movie that promises action and only delivers an unrelenting series of brutal, decidedly un-woke events. Drawing more from Verhoeven and his deliberately un-PC genre efforts than from the collected badass works of Charlize Theron, Red Sparrow is a very bizarre movie on the landscape of 2018. In 1992, it would barely have registered a blip.

Jennifer Lawrence plays Dominika Erogova, a Russian ballerina who breaks her leg on-stage one night, bringing a swift end to her career. Faced with eviction and an uncertain future for her sickly mother (Joely Richardson), Dominika accepts a job for her sketchy uncle Ivan (Matthias Schoenaerts) that soon turns into her almost being raped by a high-ranking Russian official, then immediately witnessing his murder. Having become a liability, Dominika only has one choice: to become a Sparrow, a highly trained Russian operative whose main asset in the field is the art of seduction. Not everyone can become a Sparrow, however, and Dominika soon becomes tempted by the life of a double agent when she falls in with CIA officer Nate Nash (Joel Edgerton).

Leave any notions of this being Lawrence’s Atomic Blonde at the door. Dominika suffers nothing but humiliations throughout, and is beaten and tortured repeatedly by nearly everyone she meets. Over time, she learns to use seduction as a weapon – the only weapon she really has – but even that has limited repercussions in her world. The director keeps the whole thing at a low boil, the film constantly shifting between the boardroom stiffness of early Bond movies and something significantly trashier and possibly Italian from the mid’ 70s. (It certainly doesn’t help that basically no one in the cast is actually Russian and that most of them have accents that I would charitably qualify as “tentative,” which certainly contributes to the film’s sometimes chintzy feel.)

Red Sparrow’s major problem – besides its simplistic sexual and gender politics, which are entirely intentional in a “let them feel bad about this” Verhovenian way – is really the way it tersely and clumsily toes the line between taking itself very seriously and freely thumbing its nose at its own-self importance. It’s very long and very deliberate, constantly withholding any kind of catharsis from the viewer in a way that will frustrate many. Any time Red Sparrow threatens to give you what you want (i.e. Dominika getting the upper hand on a slimy Russian creep), it pulls away. The closest thing it has to an actual action scene takes up about 30 seconds of screen time and features all of its protagonists slipping around in a pool of blood.

Those metatextual, quasi-Brechtian elements butt heads with the intricate, overly convoluted plot at the centre of the thing. Dominika switches sides and gets backstabbed so often by characters whose own allegiances are already inscrutable that the film’s deliberate pace often just feels sluggish and interminable. The film juxtaposes endless scenes of Jeremy Irons standing around an office spouting exposition with a punishing amount of scenes of Lawrence in various states of undress getting the shit kicked out of her in an awkward and not always fulfilling way.

That’s the goal, of course. The director is trying to intellectualize all that is lurid and uncomfortable about the “work” that Dominika does and turn our own discomfort against us. The spirit of Paul Verhoeven looms large here, but the fact is that Francis Lawrence is no Paul Verhoeven and he knows it. Red Sparrow makes choices, not all of them the right one, but it does seem to be choices made by a single director rather than a committee of people making sure their investment pays off. Red Sparrow is not perfect and often even maddening, but it’s nevertheless interesting in its scrappy, uneven way. That movies like Red Sparrow seem almost avantgarde these days is not surprising; that this kind of stuff ever was the norm is. ■