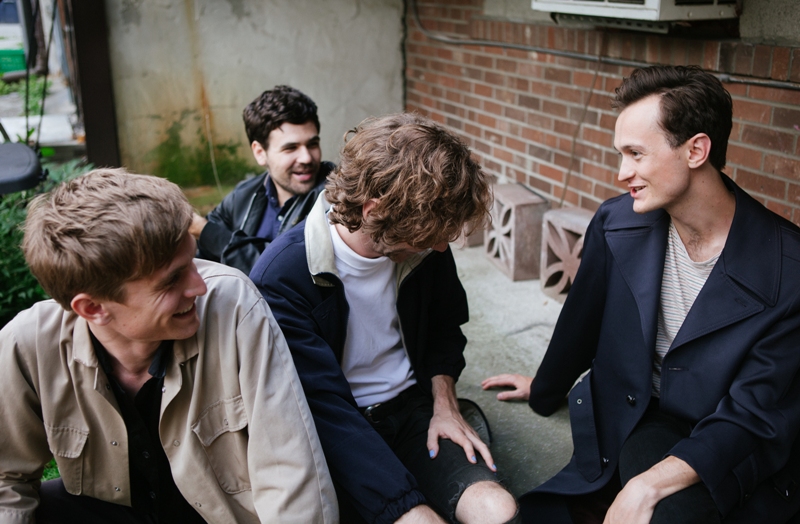 Ought. Photo by Jenna Ledger

Ought feel like themselves on their third record. Evolution has of course taken place — the band’s sound is a bit more streamlined, leaning towards emotional climaxes over jarring riff switch-ups, and lead singer Tim Darcy has stepped up his confidence and melodic chops — but in a large way, the quartet have stuck to their guns.

The songs are spurred from their usual hive-mind process, initially as pure jam sessions, later receiving more detailing with the help of producer Nicolas Vernhes and those more goosebumps-inducing emotional swells find lineage in older tunes like “Forgiveness” and “Passionate Turn.”

Darcy actually compares the process on Room Inside the World to the band’s first EP. “We had fewer time constraints cause nobody knew who we were or anything, there was more experimentation.  Also, the diversity of the sonic pallet — there are a lot of similarities between things we were getting at on that EP and that we kind of brought back in while working on this record.”

Words that often come up are “patient” and “deliberate.”  Considering plans to add more layers of paint after the fact, Darcy says they kept initial ideas a bit sparser, due in part to a realization about the guitar: “A distorted electric guitar is going to eat up a ton of mental and sonic space.”

Keyboardist Matt May adds, “A conversation we also had was it’s funny how for whatever reasons, on the first two records we realized that we were all pretty much playing all the time and when we weren’t — it’s a dropout.” Here, the foundation is oftentimes more exposed with washes of sound gradually brewing over the steady rock drumming.  “Disgraced in America” sees a detached downtempo cruise develop into aching drones over a string of instrumental breaks.

These developments don’t feel violent or forced, however, as the slight tweaking has come from subconscious changes in intention. Drummer Tim Keene mentions, “There’s not very much thinking about what it might be like.  It’s not like, ‘I’m going to do something that’s less jittery’ and then do that. It comes from a relatively naïve place. I think on this record we were more specific about what our intentions were, but I think those intentions are still what we happen to be interested in.”

For Darcy, the shift to more delicate vocal style comes from last year’s solo project, Saturday Night: “The solo record definitely was a part of my vocal growth as far as thinking about singing melodically, and honestly it was just a strong desire at the time to do some songs where I was singing in that style. It really built back in organically to the next Ought record.”  This didn’t exactly shake the cage of his band members, Keene going as far to say, “I sometimes forget that you weren’t singing melodically the whole time…I guess because all the stuff that we originally did you’re like singing and all your original material is all singing.”

Keene chalks it up to changing attitudes: “I think it’s a sign of the times that people want to be able to describe things in a sentence…I think it’s easier to say the first record is like the spikey one and the second one is the loud one, and now this one is the different one. Yes and no at the same time.” Room Inside a World sees Ought with a new splash of colour, but the same mathy humanists are tackling existence beneath that glossy surface. ■