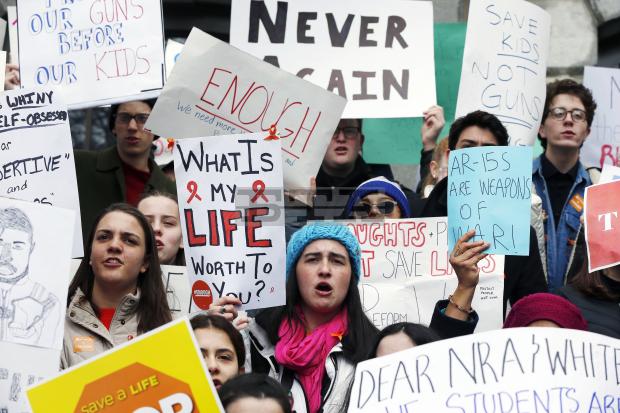 We saw a lot of celebration yesterday as American youth rose up against against political leaders and the National Rifle Association, as tens of thousands of students walked out of class to hold vigils and rallies and marches demanding their elected leaders finally do something about the kind of gun violence that took 17 lives in Parkland, Fla., just a month ago.

It was hard not to be moved by speeches like this one by grade 12 student leader Matt Post, at a Capitol Hill rally attended by 1,000 students from 28 local schools — he warned that “those who look for every answer to our nation’s gun problem but the guns themselves will be complicit in every death that comes after.”

Across the country, organizers estimated some 3,000 schools held walkouts…

Mass movements, of course, aren’t created overnight. And they aren’t created around single issues like gun control. But if history is any indication, the groundswell of anger and the impetus for change will begin with students, whose ideals have not yet been tainted and corrupted and whose hopes for the future have not yet been consumed by the struggle to survive.

Students were at the heart of the anti-war movement a half-century ago, and of the ongoing struggle for gender and racial equality. Here in Québec, they were the heart and soul of 2012’s Maple Spring, which as the nightly “casserole” pot-banging protests showed, was a much broader social movement than the government and most media were willing to admit. Despite being labelled as selfish for fighting tuition fee increases that would mainly affect future generations, students built social alliances across the board, defending and promoting the social safety net under attack by neoliberal policies of the Charest Liberal government as well as the rights of workers — including the pension plans of the same police officers who would regularly “kettle” hundreds of protesters at a time and arrest them for violating bylaws that the courts would eventually declare were themselves illegal.

“What is happening to our young people? They disrespect their elders, they disobey their parents. They ignore the law. They riot in the streets inflamed with wild notions. Their morals are decaying. What is to become of them?”

The quote is apocryphal, usually attributed to Plato. Whether he said it or not, it is meant to illustrate the fact that youth rebellion is hardly a new phenomena.

But is what we are seeing in the U.S., what we saw in the Occupy Wall Street movement or here at home in the Maple Spring student strikes a sign that young people are getting ready to rebel in a way we haven’t seen in 50 years?

Is this the nucleus of a new mass movement against a system that has utterly failed future generations by eviscerating critical resources in a mad rush of consumerism fed by the rapacious greed of a tiny economic elite?

One can only hope.

The truth is that in less than a century, modern man has managed to destroy much of the legacy that this planet should have afforded thousands of generations to come. With climate change now likely well past the tipping point and most governments failing to meet even the modest and mostly ineffectual goals they have set for themselves, it is not unreasonable for today’s youth to ask if they will be among the last generations of humans to inhabit this planet.

All this in the pursuit of economic growth, which has been sold to us as an unquestionable good, essential to the well-being of all of us, especially the poor, the unemployed and the working poor. Never mind that every year Oxfam tells a similar story about the planet’s wealth. That in 2017, for example, the richest one per cent of the population split 82 per cent of all new wealth created, and that their income rose by $762-billion while half the planet saw their revenues stagnate or shrink.

Yet we are told that companies can’t afford to pay their workers a living wage. No wonder, since most of every new dollar goes into the pockets of the planet’s 2,043 billionaires.

The latest generation has been deeply betrayed by those of us who came before it. If today’s youth don’t stand up soon and aggressively fight for the right to protect their own future, there probably won’t be much left to protect. ■