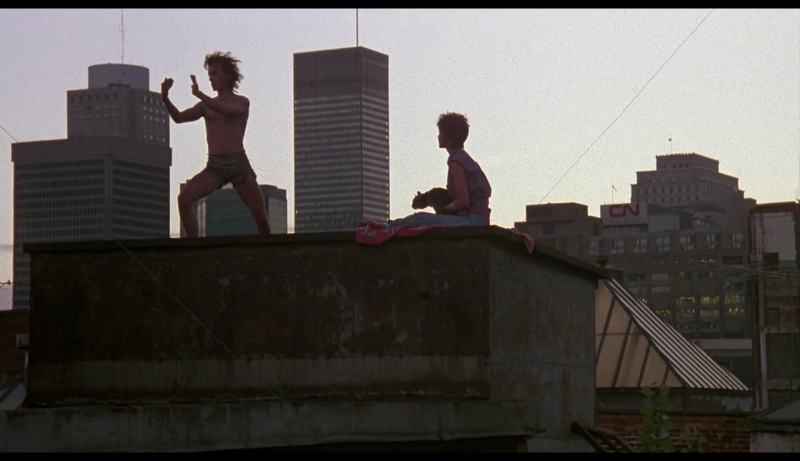 Does Montreal play itself? It’s not really said explicitly, but I’m going to posit no for two reasons: 1) the only French signage is glimpsed very briefly in the background; 2) feral children survive in its streets half-naked for years on end, so clearly the winter in this city is milder than ours.

Most notable local landmarks: Most of the film was shot either on sets or in a pre-gentrification, post-decrepitude Griffintown. A shot in which the highway is glimpsed in the background places it at St-Paul and Duke; the area has undergone such intense revitalization since then that almost nothing else is immediately recognizable. There’s one shot of Kathleen Quinlan’s character being driven in a cab where Mr. Steer can briefly be glimpsed in the background; featured prominently in its window is a “BIENVENUE AU FESTIVAL DES FILMS DU MONDE” banner!

Notable local talent: Wild Thing is an early Nicolas Clermont production. The French-born producer would later found Filmline International and produce many, many genre movies intended mostly for the video market – all of which were shot in Montreal. Wild Thing sort of lays the template for those by essentially employing local talent for every part aside from the three or four largest roles. The biggest role for a local is that of Wild Thing as a preteen, played by Quebec teen heartthrob Guillaume Lemay-Thivierge. Lemay-Thivierge had already had his breakthrough in Le matou, but was still a couple of years away from rapping about cats.

A few names down the cast list is Clark Johnson, the Concordia grad who went on to star in Homicide: Life on the Street and have an illustrious directing career, mostly in TV. He has the mostly thankless role of a cop who manages to always be around when the shit hits the fan. You’ll find many familiar faces in even more thankless roles, including Douglas “Coco” Leopold as an eyewitness on the news, Mutsumi Takahashi as a reporter (what else), soon-to-be Hollywood hotshot Shawn Levy as a street kid who ended up there because he “wanted to play keyboards for the Circle Jerks” (the Circle Jerks never had a keyboard player) and pop-singer-turned-comedian Freddie James as a teenage gang member, not to mention nearly every working character actor from 1987. 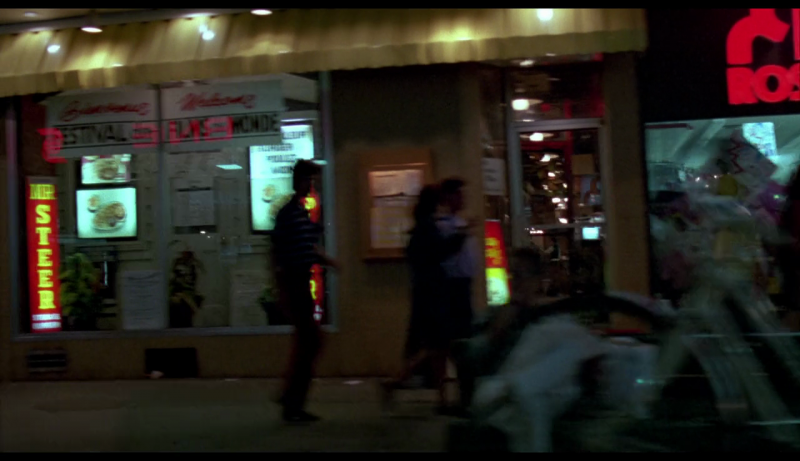 Eighties nostalgia is extremely hot right now, but it’s also a very narrow view of ’80s nostalgia. It’s a small-town, summery, nerdy, alien-heavy nostalgia that’s in these days, but there’s more to the corny side of the ’80s than that. Urban rot and inner-city carnage is woefully misrepresented in ’80s nostalgia; Max Reid’s Wild Thing, though a fairly minor effort in nearly every way, does represent this sub-subgenre remarkably well.

Wild Thing (played as an adult by Robert Knepper) is orphaned at three years old, his hippie parents having been murdered by psychotic drug dealer Chopper (Robert Davi) and a crooked cop (Maury Chaykin) for being in the wrong place at the wrong time. Only a toddler at the time, Wild Thing manages to escape his captors and is almost immediately taken in by Leah (Betty Buckley), a troubled vagrant who has escaped electroshock therapy and (presumably) institutionalization and instead retreated to the sewers. She teaches Wild Thing (who barely speaks) not to trust “the Company,” by which she means basically all of civilization, and promptly dies when the kid is roughly 10.

A decade and a half later, the area where Wild Thing squats (alongside his trusty cat sidekick, who does about as much as you would expect a cat sidekick to do) has become “the Zone,” a crime-infested inner-city hellhole that Chopper runs with despotic rage. Social worker Jane (Kathleen Quinlan) comes into the Zone to help run a drop-in centre for troubled kids; she’s almost immediately assaulted, then saved by Wild Thing, who suddenly begins to feel the kind of feelings that he’s never had access to before.

Wild Thing is the kind of movie that casts an extremely distrustful look at urban centres. When they aren’t covered with graffiti and breakdancing children and drug dealers with long dangly earrings, they’re shrouded in a deep cloud of ground-level smoke in which all the basest instincts lie. It’s the kind of movie where a psychotic drug dealer is made up to look somewhat like a revolutionary, only to prove that he’s the bad kind of capitalist (one that commits his murders himself). Movies like Wild Thing are directly reacting to the idea of suburban sprawl, and they’ve become doubly antiquated at a time when these very same spaces are now filled with 80-storey office buildings and million-dollar penthouse apartments. 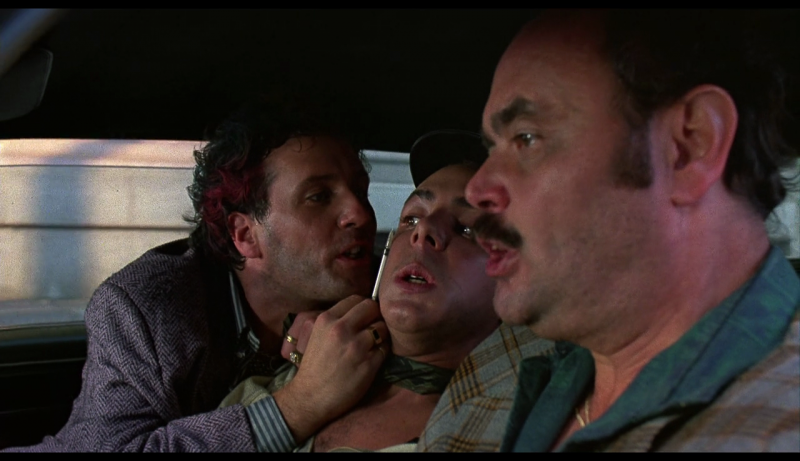 Suffice to say that there aren’t many narrative surprises held in this Tarzan-meets-The-Warriors-meets-Robocop programmer, even if it was written by John Sayles (!) and even if it does have significantly more style and texture than many of its ilk. Though obsessed with the mid-’80s (the flash-forward from Wild Thing’s childhood to his adulthood is scored to bass-slap boogie, laying the words “THE PRESENT” over footage of kids in berets and oversized pleather trench coats), it feels a lot more like a ’70s film in most respects.

What ultimately does Wild Thing in and relegates it to a mere footnote rather than some sort of lost camp classic is its hazy sense of purpose. Too gritty for children but too simplistic and cartoonish for adults, it occupies a weird no man’s land in which no one is really being served by the film. We often look back on movies of the era with this wistful sense that movies weren’t dumbed down for kids then – that family movies were really for the family – but Wild Thing’s indistinct grey-brown tonal shadings also prove that that could be a bad thing. ■

Wild Thing is available on DVD and Blu-ray via Olive Films.