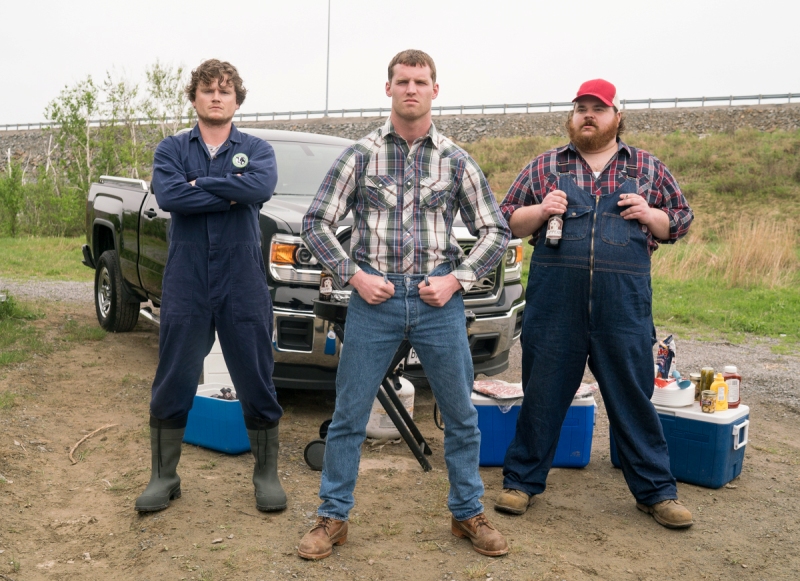 In Montreal, actor and former Cult MTL cover boy Jared Keeso is likely best known for his starring role as a serious SPVM cop in the English version of 19-2. In the rest of Canada, he’s more famous for playing an entirely different yet equally stone-faced protagonist: head flannel-wearing hick Wayne on Crave TV’s Letterkenny.

Although he plays a convincing police officer, Wayne and the world of Letterkenny is a bit closer to the real Keeso, who created the show and wrote the early web episodes that spawned the television version. Letterkenny, which is shot in Sudbury, is based on his rural Ontario upbringing in Listowel.

“We’re certainly an embellished and exaggerated look at life in small town Ontario, but the core groups do exist. In high school we had hicks, skids, hockey players and Christians, so it’s true to form there,” says Keeso by phone from Quebec City. “The difference is we go a little wacky with it in Letterkenny, more so than it ever got back home.”

What sort of hijinks do the 5,000 people in the fictional Letterkenny get up to? Typically an average day there will involve the odd street fight, some pints downed at watering hole Modean’s II, chirps between social groups and maybe some ice fishing, weather permitting. What separates Letterkenny from, say, an actual small town or comedies in similar settings like Trailer Park Boys, is the adept wordplay.

Letterkenny basically has an internal iambic pentameter in hick-speak, rife with puns, alliteration, repetition and even limericks. If you don’t speak the language of Letterkenny, you might feel like you’ve entered a foreign land without a translator. For instance, Wayne and his pals wax eloquent in lawn chairs by their produce stand. Then there are the hockey players for the lowly Letterkenny senior team, who always speak in turn to hilarious effect.

There’s no way anyone really talks like that, but there’s some truth to how these oddballs converse.

“You’ve got your small town vernacular and your country catchphrases like ‘pitter patter, let’s get at ’er’ — that’s the stuff that’s said back home. But we dream up a lot of it,” says Keeso. “What’s always worked for us was the quotables, the contagious dialogue that people would hear and want to repeat. The personal inspiration for me was Guy Ritchie movies, the East London crooks with their cockney accents and slang. I found it so interesting and re-watchable.”

Keeso’s writing partner is Montreal director Jacob Tierney, probably best known for 2009’s The Trotsky with Jay Baruchel. Tierney has also directed every episode so far – a rarity for a comedy – and is responsible for making the show’s frequent fist fights feel like high-brow dance scenes.

“He shoots them in slow mo, and if you do that you have the option to speed it up,” Keeso explains. “They resemble a bit of a dance at times. What’s unique to our show is we don’t rehearse stunts and fights, we choreograph and shoot it on the spot.”

Keeso says there isn’t even much of a physical writer’s room, since he and Tierney are more likely to crack each other up and get distracted than actually write anything. Instead, they keep to their separate rooms and swap ideas back and forth.

One classic Letterkenny bit that Keeso and Tierney can’t take credit for is an encounter with a group of Quebec hicks — known as “les hiques” — on an ice fishing trip to our fair province. Although Keeso has a residence in Saint-Alphonse-Rodriguez in the Lanaudière, the Jonathan Torrens (Jonovision / Trailer Park Boys) penned episode was not inspired by Keeso’s experiences — the three Quebecers Wayne and his buds trade barbs about Simple Plan and foie gras with are merely their francophone doppelgangers.

“We basically tried to pick all the biggest stereotypes,” Keeso says. “There’s a bit of risk in writing like that, because people might think it’s too inside baseball, but we do that unapologetically. It’s a show made in Canada, by Canadians and for Canadians. We’re going to shine light on all the different types of Canadians. We’re going for insults that resonate with anglos and francos.”

It’s not just the jokes that are uniquely Canadian, either. Keeso personally picks the show’s CanCon-heavy soundtrack, which had a triumphant bar re-opening set to cheesy Quebec disco classic “It Always Happens This Way” by Toulouse and a fist fight with degenerates (aka degens) accompanied by local punk rockers Ponctuation. They had Alaclair Ensemble playing during a scene about mailbox destruction. Even the band who wrote the theme song is unsigned, points out Keeso. (They’re also in the midst of changing their band name.)

For the upcoming live show, Keeso says they didn’t look to other Canadian shows that made the jump from screen to stage, like Trailer Park Boys and Kids in the Hall.

“We’re approaching it like a rock band would,” he says. “We’re playing the hits.” ■