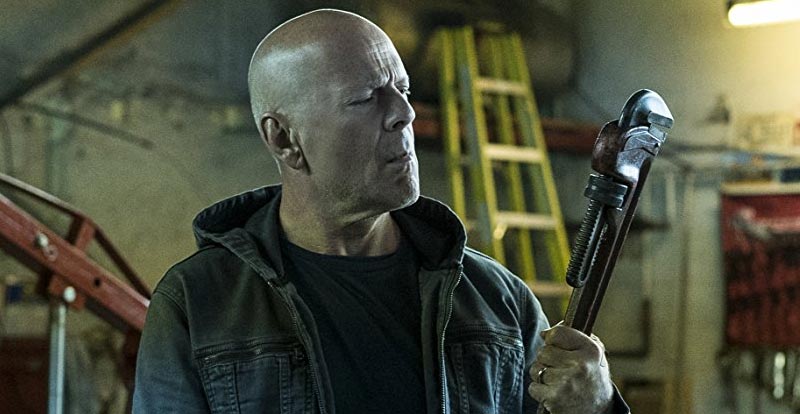 It seems completely inevitable that there is a remake of Death Wish. It feels like there has been a remake in the works ever since I’ve been cognizant of movie news. Considering that nearly every A-list male star over the age of 40 has seemingly been considered to fill Bronson’s shoes and that countless directors of varying levels of talent have been attached, the film’s first strike is the fact that it settled on Bruce Willis and Eli Roth. Both have done good work in the past, but neither have been doing anything near their best work in the last few years. Willis has been particularly catatonic, shuffling his way through supporting roles in terrible DTV movies that he seemingly chooses based on how little they require him to move around.

None of this boded terribly well for Death Wish, even when you consider that it stands as the blueprint for so many cash-grab vehicles for ageing stars these days. The original Death Wish struck a nerve in 1974 — a reactionary and ultimately regressive nerve, certainly, but a nerve’s a nerve — but the world of 2018 is a very different one. Just a few weeks after the Parkland shooting, it’s more than a little uncomfortable to watch Bruce Willis hem and haw because paperwork makes it harder for him to purchase all the guns he needs to shoot down bad guys in the streets. To even assign deliberate politics to Eli Roth’s take on Death Wish, however, feels like a stretch: I have a feeling that Roth’s major position vis-à-vis the events of Death Wish is that he likes the movie Death Wish starring Charles Bronson.

Paul Kersey (Bruce Willis) is a successful Boston-area surgeon with a beautiful wife (Elisabeth Shue) and athletic teenage daughter (Camila Morrone) who’s about to head off to college (at NYU, of course — the only acceptable college in any movie) in the fall. Kersey’s a pacifist at heart, a cardigan-wearing softie who flinches when he gets into an argument with another angry soccer dad at one of his kids’ games. (It all stems from his relationship with his abusive dad, as his brother, played by Vincent D’Onofrio, points out.) When he’s called in to the ER one evening, thugs break into Kersey’s house in order to rob it; things go awry, and they end up killing his wife and putting his daughter in a coma. This immense loss fries Kersey’s brain, and he becomes consumed with exacting revenge on the men who ruined his life.

Roth’s take on Death Wish (the script of which is credited to Joe Carnahan, but some sources claim little has survived of Carnahan’s take over the film’s long production) is surprisingly faithful to Winner’s original in a lot of ways, even if it does change Kersey’s profession from architect to surgeon (presumably for the added pathos of Kersey being at work when his whole family is brought in to the ER); where the film does stray makes a huge difference. Bronson’s Paul Kersey murdered anyone who he deemed a criminal because he felt the police wouldn’t do the job — the message (deemed by many as fascistic, not inaccurately) being that the nature of evil is not necessarily the one determined by current power. In Roth’s Death Wish, Kersey tracks down the four men that killed his wife and injured his daughter. He rather pointedly seeks revenge rather than exacts vigilante justice (though he does a little bit of that, too).

That fundamentally changes the message of Death Wish, but it’s also a quasi-inevitability. With the technology available in 2018, we have to assume that the Bronson version of Kersey would also have tracked down the men responsible. Part of his powerlessness and frustration stemmed specifically from the fact that he did not have access to direct revenge. The 2018 version of Death Wish brings GPS tracking and Google and a corpse’s thumbprint into the mix and makes Kersey’s “rampage” a much more morally comprehensible (if not exactly justified) action. Kersey isn’t just taking any action to counter his powerlessness; he’s making the so-called comprehensible move, the one that Liam Neeson made in Taken. The modernization also brings in some nice touches (the pacifist Kersey learns to load and shoot a gun from YouTube tutorials), but the fact remains that it also fundamentally misunderstands what makes Death Wish such a problematic and fascinating film and turns its dubious politics into a generic shoot-em-up.

Roth is instead content riding the crest of revenge movie momentum, designing increasingly Rube Goldberg-esque methods to dispatch the greasy bad guys in stupendously gory ways. It’s the vigilante film as knowing horror flick, cycling through torture porn and home-invasion tropes with a committed sense of uselessness. In short, this is pretty much exactly what an Eli Roth Death Wish movie should look like. Willis is more alive than he’s been in nearly a decade, but even that falls somewhat short of making him a compelling figure. It’s hard to buy Willis as a milquetoast intellectual who snaps when he pretty much just feels like Bruce Willis from A to Z, but the few flashes of the animated and charismatic Willis of yore makes me yearn for him to find a project that he actually does care about.

I’m not sure there was ever a right time to release this particular take on Death Wish, but the fact that Roth seems mostly uninterested in exploring violence thematically beyond the base impulse of vengeance and the way you can hook up a contraption so that a dude’s guts could conceivably burst out the top of his head really make this particular version a wash. America has never seemed this violent, and yet Death Wish still seems to think that what’s threatening the fabric of America is “hoodlums” in bandanas jacking cars in rough neighborhoods and theft rings full of greasy white dudes with mullets and tattoo sleeves who operate out of the South Side of Chicago. If it were only so simple. ■