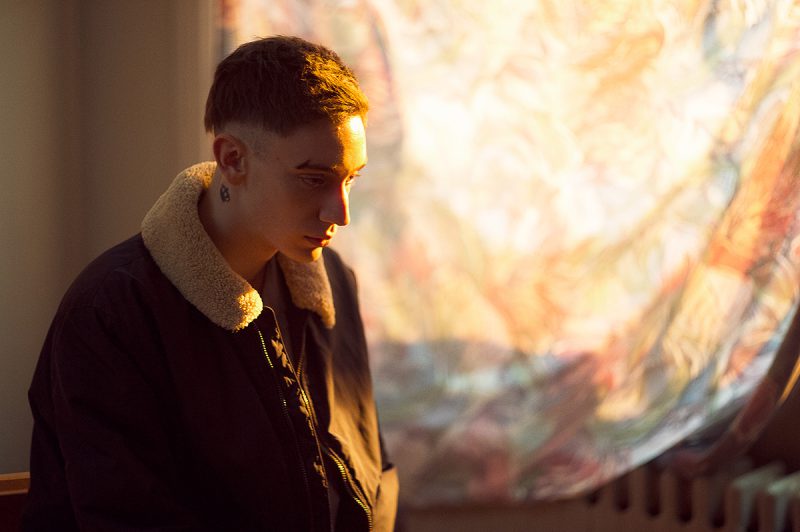 “I wanted people to look at my film and see — if not themselves — someone they know in it,” says Sophie Dupuis of her debut film Chien de garde. “They could be my uncles, my cousins. If I made it too trashy, they’d become the Other. I wanted to bring them into a context that was somewhat universal — this is what happened to them, this is where their journey took them and it could happen to anyone. Beyond that, it was a question of making choices, down to the casting.”

JP (Jean-Simon Leduc) works as a debt collector for his shady uncle (Paul Ahmarani) who operates under the cover of a dive bar. JP’s right-hand man is his 19-year-old brother Vincent (Théodore Pellerin), a hyperactive and unpredictable kid who feels a fierce connection to his brother and mother (Maude Guérin) and seriously complicates the job with his unbridled emotions and frequent outbursts. JP is doggedly trying to finish his training as an electrician and move out of the small apartment he shares with his family and girlfriend Mel (Claudel Laberge), but the toxic relationship he has with his family and their ever-present, ever-growing needs forces him to stay. When his uncle gives him an assignment that takes him out of petty crime and into the big leagues, JP is forced to make a choice.

Chien de garde is set in a Verdun that’s very recognizably itself. No attempts have been made to add or remove grit to the usual image of a “Montreal working class neighbourhood.” It’s a pretty rare occurrence, especially in local film — most of the time, filmmakers opt for Hochelaga.

“I’m from Abitibi, and I feel like when I got to Montreal, it wasn’t really as big as it seemed,” says Dupuis. “I still had this feeling of a small town, depending on the neighbourhood or even in the circles you run in. In the film world, everyone knows each other. I wanted to present a neighbourhood as a sort of microcosm. I chose Verdun because I didn’t want to go over territory that was already so well-worn. I discovered Verdun when we were scouting. It was really born out of this desire to place this family in a village within a city.”

For Dupuis, a lot of the film happened naturally simply through the actors she cast.

“We saw so many people for JP,” she says. “We even opened it up to non-professionals. We had a big campaign online that resulted in tons and tons of casting videos. We probably saw 200 people if you include self-tapes. I saw practically everyone working in that age bracket in the province. At first I didn’t want Jean-Simon for the role at all because I thought he was too old, but when he finally auditioned it was just it. I really do think that everything happens at the casting stage. Everyone in the film — except Marjo — auditioned. I want to feel a connection with the person, I want to feel an energy but I also want to feel that we can work together. ”

The same goes for Pellerin as Vincent, the flashier of the two. Pellerin’s career has since taken off — he appears in Joel Edgerton’s upcoming Boy Erased alongside Nicole Kidman, Russell Crowe and Xavier Dolan as well as on the second season of The OA — and yet Chien de garde still feels like a revelation. He has something of Robert De Niro as Johnny Boy in Mean Streets — a sort of untamed electricity that courses through him at all times.

“We were a little worried he’d outshine everyone else,” laughs Dupuis. “We thought he might take up too much space and maybe some people might see it that way anyway, but no one else but Théodore could have played Vincent. (…) He’s in a league of his own. He’s a boy genius — he was only 19 when we shot the film! His gaze, his intelligence, the way he reads a script — it’s completely otherworldly. Actors like that are rare. People ask me if Théodore has that kind of energy in real life — not at all. It’s all performance. It’s incredible!”

With hints of the aforementioned Mean Streets but also of Mike Leigh’s slice-of-life looks at the working poor, Chien de garde is a striking debut — but also one that would, once upon a time, have been associated with the the angry young men of the silver screen. It’s ultimately more a film about family than about small-time criminals knocking people upside the head for a drug debt.

“It’s crazy how, when you’re a woman who makes movies, people ask you why you make movies about men,” says Dupuis. “The leads in my projects are often men. My next one is set in a mine with exclusively male characters — which surprises people! If a guy makes a movie with a female in the lead, no one asks that question. (…) It was really important to me not to go into so much detail about what happens at work. To me, it’s a film about family. Crime is something that the family has to deal with, but it’s only one element of their lives. The criminal aspect to me was the second layer of the story I wanted to tell. Beyond that choice, I wanted to make a dynamic, explosive film that gives you a stomachache. That’s the kind of movie I wanted to make and continue to make. When you write with this kind of energy in mind, it happens naturally.” ■