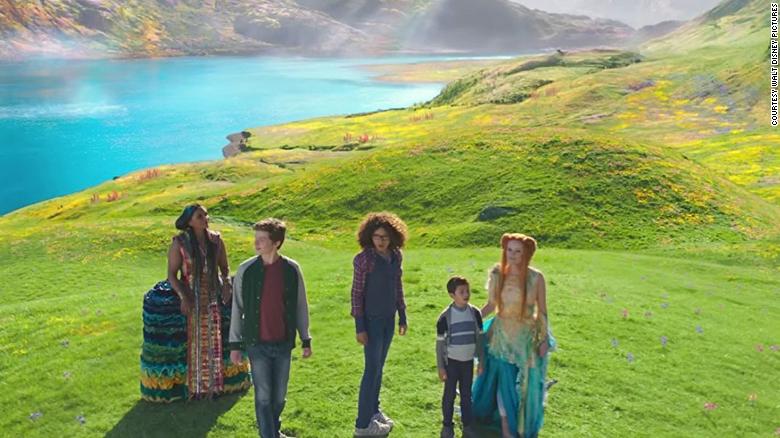 Before anyone ever saw a single frame of A Wrinkle in Time, it had already cleared some space for itself as a major cultural moment. It’s the highest budgeted film ever directed by a woman of colour and stars a young African-American girl in the lead, which props it up against Black Panther as a major move forward when it comes to representation in blockbuster filmmaking. All of this is great – it’s necessary and frankly embarrassing that it took this long to happen – but none of it actually has any bearing on the content of A Wrinkle in Time. Though its proximity in release date to Black Panther has drawn inevitable parallels, the source material of A Wrinkle in Time has very little to do with the reasons why it was so anticipated. It’s based on a vaguely Jesus-y young adult novel from the early ’60s that isn’t particularly culturally relevant today without some retooling.

So there’s good news and bad news here. First, the good: A Wrinkle in Time is seriously weird for a movie aimed at little kids, especially one made in 2018 rather than, say, 1973. It’s a movie with seemingly limitless imagination and the means to pull it off, which is always something that I welcome. The bad news: A Wrinkle In Time is a real mess tonally and narratively, a rickety and sometimes banally incomprehensible cartoon spinning its wheels into oblivion. I sometimes bemoan the lack of risk-taking in blockbuster films, but A Wrinkle in Time takes lots of risks and winds up whiffing about half the time.

Meg Murry (Storm Reid) is an outcast at school, bullied for her nerdy, tomboyish looks and for the fact that her scientist father (Chris Pine) has disappeared. Most suspect that he simply ran off, but Meg, her mother (Gugu Mbatha-Raw) and little brother Charles Wallace (Deric McCabe) know what really happened: their dad found a way to harvest a tesseract and “wrinkle time” travelling across time and space in the blink of a second. He just hasn’t found his way back, a fact that is confirmed when Meg and Charles Wallace are visited by three ageless space-travelling sort-of witches (Oprah Winfrey, Reese Witherspoon and Mindy Kaling) who have decided to help them find their dad by accompanying them on an ill-defined voyage through time and space. (They also string along a befuddled and mostly useless friend from school played by Levi Miller.)

There are times when A Wrinkle in Time borders on the sublime, a gently trippy kaleidoscopic voyage that suggests Reading Rainbow was somehow visited by Dr. Funkenstein and the Mothership. There are scenes that verge on the indescribably bizarre, such as when Charles Wallace, riding on a dragon made of cabbage that used to be Reese Witherspoon, caresses a 50-stories-tall Oprah Winfrey’s face or when they visit a red-eyed Michael Peña on a crowded beach and he feeds them sandwiches filled with sand. Those are the moments when A Wrinkle in Time feels truly and inescapably like it’s moving towards something huge, which clashes directly with its more laboured attempts at defining characters and plot.

The three Mrs. have the unenviable task of being guides to both the on-screen children and the children in the audience, meaning they constantly have to keep on funnelling exposition and explaining the truly inexplicable world they inhabit. It all winds up being a lot of the kids being brought from one place to another, being shown and told things that they very rarely interact with. It’s almost certainly a flaw that stems from the story’s written origins, but A Wrinkle in Time proves to be stunningly passive for a movie where a bunch of little kids hang out inside a volcano with Zach Galifianakis. Too often, it feels like they’re simply being shuffled through museum exhibit after museum exhibit. (Case in point: Meg has trouble “tessering” because she doesn’t love herself, which causes her pain when she travels. The Mrs. decide that she has to go back to regular time and learn to love herself – then immediately change their mind, because I guess we don’t have all day?)

Though the film toys with notions of Afrofuturism, it seems like A Wrinkle in Time would also have benefitted terribly from a more outré sense of style. There are some truly trippy things in here, but they’re also set to fizzy iPod commercial songs by DJ Khaled and Sia. I fantasized in the theatre of seeing something like this scored to the cosmic nightmare jazz of early ’70s Miles Davis or something and, while I know that this would ultimately never happen, it’s hard not to feel disappointed with the film for setting the bar so high for itself. Beyond the crazy costumes and some of its addled CGI creations (Reese Witherspoon talking to a bunch of flowers is a highlight), there’s something that feels lost between the relatively straight-laced source material and director Ava DuVernay’s crazier ideas.

I don’t have too much in common with preteen African-American girls in general, so I can’t even begin to pretend that A Wrinkle in Time was for me. You wouldn’t be wrong to assume (as many already have) that it’s a bit pointless for me to even lob any criticism at what DuVernay is doing here, but the fact is that there’s a lot of good (weird) stuff in this movie. It’s a movie that has so much ambition and imagination that it often way outperforms its own script, its own message and its own limits. It’s a movie that pulsates with life, but only long enough to set the table before its character motivations randomly change in the middle of a scene and everyone pauses to explain basic moral concepts to each other. Maybe I’m being unfair – it’s for kids, after all. But, if nothing else, A Wrinkle In Time also has a long life ahead of it as a midnight movie. Someone check if it matches up to Hawkwind’s Space Ritual – just in case. ■

A Wrinkle in Time opens in theatres on Friday, March 9. Watch the trailer here: