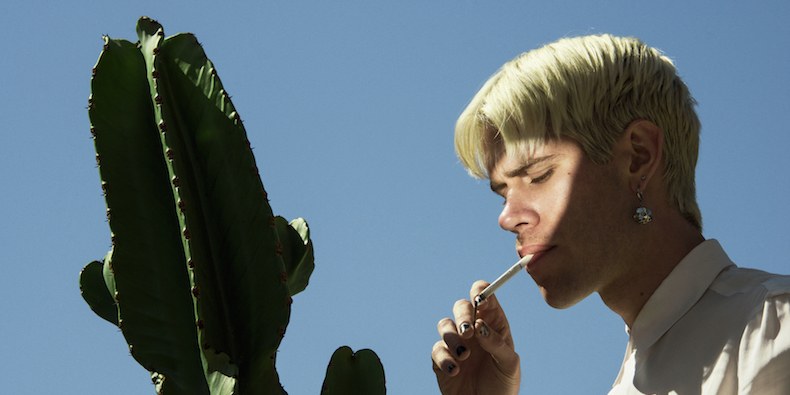 As the story goes, the latest album from Porches saw Aaron Maine through some hectic days. A change of apartments and the end of a relationship made for a record that charts the warm and cold days of the start of a new chapter. Being an artist who commits to the studio on a rather full-time basis, sometimes it’s these big life moments that tell him when it’s time to tie up the loose ends on a batch of ideas.

Ahead of his Montreal date this Sunday, we spoke about the making of The House and life’s funny way of making decisions for us.

Donovan Burtan: So, I want to talk about The House. Can you give us a bit of an overview of the recording process and how these themes came into play?

Aaron Maine: It was a pretty hectic, eventful time. The way that it all lined up is quite fitting, I guess, for the content to, in a way, close a chapter on the record and begin to close a chapter on the previous relationship I was in. Throughout that time, when I was home between touring, I just had this kind of regimented work flow, where I felt extremely compelled to use every moment I had to myself to write and record.

Somewhere down the line, it became clear to me at least that I felt that these songs needed to begin and end as close to the real-time events that were happening. It just felt very of-those-times and I wanted to keep that feeling intact — make something that reflected that period.

DB: The tune “Goodbye” stuck with me a lot, I think it sums up the contradicting moods in that it’s uplifting towards the end but it’s also somber. Can you talk about that tune in particular?

AM: That song I remember pretty vividly, writing it. I had taken the train up to Pleasantville (New York) where I grew up — I went back to vote and I was pretty moved.

It’s always an interesting experience walking around the town where I grew up, but that day in particular was really beautiful and emotional and I was alone just kind of walking around with this one thing I had to do. Thinking about my youth and in a really vivid way, I could imagine myself as a kid on these streets. It feels kind of crazy when you remember that you were that person.

“Goodbye” is kind of an overwhelming feeling of the sadness of letting go and knowing that you can’t go back. That relationship you were in in high school will never happen again and you can never relive that experience the way that you went through it. It’s a greater comment to saying goodbye to your past experiences.

DB: Big life events tend to make us look at everything, I suppose. Would you say that life events sort of decide when it’s time to put together a record? Do you think maybe something drastic happens in your life and that signals that these recordings are going to be important?

AM: I’ve been thinking about that recently, too.  I think there’s all sorts of ways that you come to the realization that a record is done. It could be like you said, a course of events happening and you feel like you want to speak about that and stick to that timeline. You could have an idea of what you want to achieve with the record and you don’t want to stop until you’ve achieved it or come to terms with the results of trying to achieve something.

It always seems pretty clear to me when I have a batch of songs that seems like it could be a record. Once you start making that decision and tying up loose ends, I feel like you could go on forever making production decisions or waiting for one more song that needs to be on the record, but most of the time it kind of just becomes clear.

DB: Could you talk a bit about how these themes maybe influenced the sound of the record? I think there’s a bit more of a spaceyness or an air of somber self-reflection.

AM: the main way that I reflected that feeling production-wise was I tried to keep it as economic as possible and I think, through that, I was creating a sense of urgency where you use what you have at that moment to communicate this intense thought.

I tried to commit to the earliest vocal takes I had because I felt like they had the most emotion and I wanted it to feel as raw sonically as it did emotionally.

DB: I think there’s a delicacy to it but it also feels direct emotionally.

AM: I’m glad that that translates to some people, and to some people it might feel a bit less attended to than they might have been hoping for, but I guess it felt proper personally to explore it that way for me.

DB: You were working with Dev Hynes (Blood Orange) and Sandy Alex G from what I gather and I think maybe a connecting factor with those musicians might be intimacy. I think that’s a driving force behind their work even if it spans different genres and, maybe amounts of noise. Do you think that’s something you guys connected over?

AM: I’m trying to think if there’s a relationship between why I’m drawn to each of their music so much and I think they both just do what they want to fucking do and I really respect that/ They’re both quite prolific and kind of jump around genre-wise, which I feel a tendency to do.

I’ve just been big fans of both of their music, it’s very intimate, raw so I think naturally I was trying to imitate the artists that I admire—find something that I could latch onto and make my version of it.

DB: You’ve played Montreal before — do you have any thoughts coming into the city?

AM: I’m excited. Has it been fucking freezing up there like it’s been here?

We had an amazing show last time, it was one of the last shows we did in 2016. I hope this one’s great. It’s our fourth stop so we’ll be ripe by then and ready to say what’s up. ■