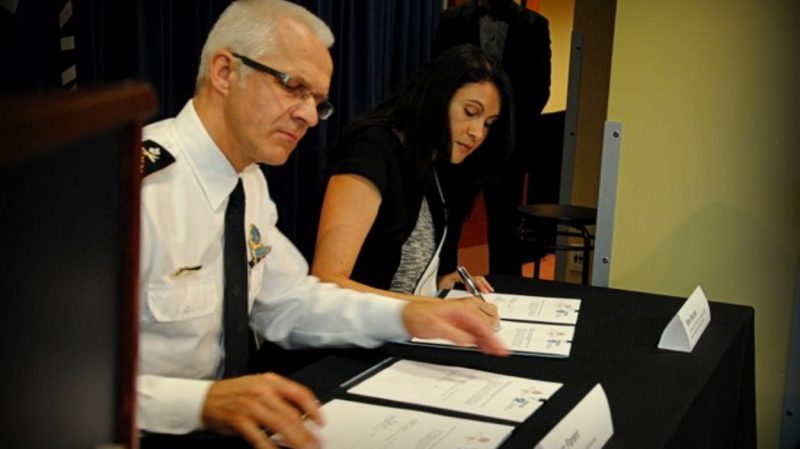 How can anyone still deny that Quebec — like most other modern societies — has a problem with systemic racism? When a police officer suggests the best way to deal with Indigenous people in a Montreal park is to assign them all numbers — basically, to deny their humanity — you know you have a problem. And when you know the same SPVM officer was actually assigned by Station 12 to attend this meeting with Indigenous representatives, you know that the contempt isn’t isolated, it is ingrained, systemic and obtuse.

“He believed that the strategy should be to tag the Indigenous people living in and around Cabot Square with numbers so that they could identify them,” Montreal Urban Aboriginal Community Strategy Network coordinator Allison Reid said Wednesday. “Because their names were not important to him.”

When the police force signed an agreement with much fanfare in 2015 to improve relations with the Montreal Indigenous community, you can be forgiven for believing that long-awaited change might coming. But when a carefully constructed sensitization program for 120 officers prompts disinterest and derision from those attending the first session — and leads to the cancellation of 11 remaining sessions — you have yet more confirmation that police contempt for “Indians” is ingrained, systemic and obtuse.

Native Women’s Shelter of Montreal director Nakuset recalled one officer at the session saying: “I don’t want to know about your history. I want to know what to do when I see a drunk Indian.”

These stories and others marked the third day of local hearings of Quebec’s Viens Commission, which is looking into relations between police and Indigenous communities. The hearings were launched after a groundswell of anger over the treatment of Indigenous women by police in Val d’Or and other northern communities that made international headlines in 2015 and an inquiry into abuse, intimidation and assault failed to result in legal charges.

According to Nakuset, three of the four components of the “landmark” SPVM 2015 agreement are “failing miserably.” Even the appointment of a liaison with the city’s Indigenous population disappointed after the police failed to put an Indigenous officer in the job.

Not that there are a lot of minority officers in the force. Despite years of minority hiring targets, just 8.5 per cent of SPVM officers describe themselves as having Indigenous or visible minority background in a city where one-third of the population fits that description.

The lack of diversity within police ranks reinforces a sense of detachment from the city’s non white-francophone population and leads to conscious or unconscious social and racial profiling, as revealed in a 2015 report commissioned by the SPVM to evaluate the force’s progress.

“The police don’t understand the lives of the people they’re policing,” the report’s lead author, McGill psychiatry professor Myrna Lashley, told CBC. “They have difficulty putting themselves in the shoes of the person standing in front of them.”

The report found that programs that made progress in building a rapport with minority communities were often underfunded and underappreciated and quickly sacrificed in the face of budget pressures.

Continuity of efforts in addressing these issues has also been hampered by the turnover in police chiefs since 2015. The agreement on Indigenous relations was signed by outgoing chief Marc Parent, who also commissioned the study on police profiling. His successor, Philippe Pichet, was quickly caught up in the issue of police treatment of the city’s itinerant population after yet another homeless man, 38-year-old Jimmy Cloutier, was shot and killed by police outside the Old Brewery Mission in January 2016. But Pichet’s meetings with Old Brewery president Matthew Pearce to discuss strategies in dealing with the homeless came to an abrupt halt in December when Pichet was suspended and replaced by Sûreté du Québec top cop Martin Prud’homme, on loan to the SPVM for a year and mandated to reorganize the force and restore confidence in it from both officers and the public.

With all that on Prud’homme’s plate, critics are doubtful that the temporary chief will give much attention to the force’s perceived problems with racial and social profiling, which managed to continue unimpeded even when police brass were theoretically devoting significant efforts to reverse the tide. They also point out that it was SQ officers involved in many of the Val d’Or complaints and that the provincial force is even more lilly-white (99 per cent) than Montreal’s.

“The SQ is not known for being a police service that is very sensitive or responsive to ethnic diversity issues, both externally and internally,” race relations activist Fo Niemi told CBC.

If there’s hope for change, however, it could come from the new chair of the city’s Public Security Commission, Alex Norris. The Projet Montréal councillor for Plateau-Mont-Royal since 2009, Norris is an outspoken former investigative journalist with the Montreal Gazette.

In the 20 years I’ve known him, Norris has always demonstrated the skill that Lashley says is so lacking in the Montreal police: the ability to put himself in someone else’s boots.

All the better, perhaps, to give the SPVM a much needed kick in the ass. ■