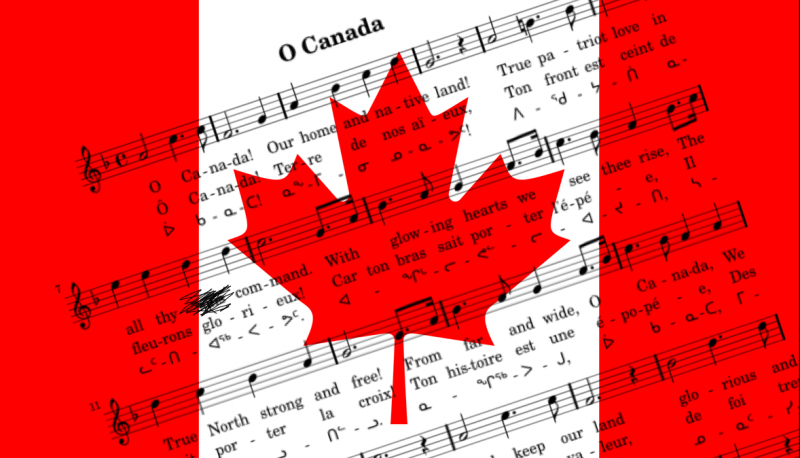 Ottawa– After more than a century of inequality, people across Canada are celebrating the Senate’s decision to change the O Canada lyrics. They aim to replace our national anthem’s outdated lyric “in all thy son’s command” with a blistering three thousand word call to arms penned by a covert league of militant left-wing henchpersons.

The change, which comes after decades of failed attempts to remove the gendered phrase, feels long overdue for Canadians who grew up not recognizing their own violent urge to overthrow the patriarchy in the original song.

“We sang the national anthem in class every morning when I was a kid,” said Eliza, 32. “I always felt left out, to be honest,” she went on. “For a tune that’s purportedly about a free country, it always struck me as a bit odd they neglected to include a merciless diatribe about girls and non-binary folk melting the glass ceiling with their molten rage,” she remarked. “Now, thanks to the Canadian Senate and an anonymous coven of cold-blooded radicals, I can sing all 3,063 words with pride.”

Despite a virtually unanimous Canadian thirst for the elimination of male supremacy in all social and economic contexts, the bill – and Independent Senator Frances Lankin’s motion to force a vote after 18 months of debate – was met with some criticism from members of the Conservative Party.

“Boys have always ruled and girls have always drooled,” said Conservative Senator Leo Housakos. “That’s how democracy works,” he explained, pausing briefly to do the jerkoff motion in the direction of Sen. Lankin. “It’s our God-given right to keep all things exactly as they were in the early 1900s, and if that means an 18-month long debate over semantics or the odd case of Spanish Influenza in the name of tradition, so be it,” continued Housakos. “Forcing us to vote on your politically correct lady-bill is literally murder,“ he exclaimed. “Pardon my French, but the Conservative Party wishes to inform you that your ASS is officially on BLAST, Trudeau.”

For Trudeau’s part, the prime minister has expressed his approval of the modernized version of the song.

“I have always believed in gender equality for all Canadians,” said Trudeau in a tweet shortly after the bill was passed. “And I’m proud to live in a country where my sons Hadrien and Xavier can sing their national anthem and know the power structures from which their inherent privilege was borne will be reduced to cold, stinking ashes as outlined in the manifesto, which may or may not have been ghostwritten by my wife Sophie.”

The bill must receive royal assent by the Governor General before it comes law, but Independent Sen. Chantal Petitclerc doesn’t anticipate any issues.

“Most people are aware that Julie Payette is a skilled musician who has performed with Orchestre Symphonique de Montréal, but what a lot of them don’t know is that she actually penned campfire favourite ‘Marriage is Slavery, Testosterone is Poison, Intersectional Solidarity Will Burn Your Kingdom’, which is referenced several times in the new O Canada lyrics,” noted Sen. Petitclerc.

It is widely reported that an all-star rendition of the rejuvenated national anthem will be performed at this year’s Canada Day celebrations, provided the Ottawa Children’s Choir can learn how to pronounce “subordination.” ■

To read more of Ellie MacDonald’s satire column, please do so here.