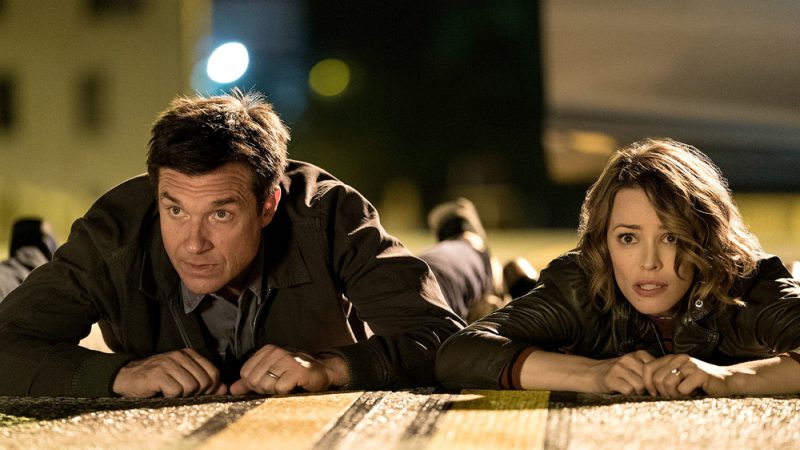 Writing a mainstream studio comedy seems a little bit like writing a three-chord pop song: many of their so-called variables aren’t variables at all, and they inevitably wind up sharing so many characteristics that they end up being same-y. John Francis Daley and Jonathan Goldstein (who directed but didn’t write) have made an enviable career out of heavily coded, tightly formatted studio comedies that can be succinctly pitched. A movie like Horrible Bosses sounds like it could possibly break the mold, but beyond the darkness of its concept, it more or less dutifully ticks all the same boxes that a middling Will Ferrell or Amy Poehler vehicle might. Suffice to say that I wasn’t expecting Game Night to buck the trend: generic title, generic marketing scheme, presence of everyman pinch hitter Jason Bateman in the lead role… while I always want movies like Game Night to be good, they’re rarely more than just okay.

Imagine my shock when it turned out that Game Night actually does buck the trend — by doing practically nothing different. It turns out that, once upon a time, the way in which big ensemble comedies were whittled down to one structure actually had a purpose. This kind of thing actually works if the jokes are funny. While certainly not revolutionary or trail-blazing in any way, Game Night represents something even more rare: a nearly perfect example of the genre, one that embraces the codes, tropes and inevitable clichés (of course there’s incongruous use of pop music; of course the big bad guy is played by a TV star whose appearance is, if not surprising, presented with enough ballyhoo that it generates the illusion of surprise) without going full-meta.

Max (Jason Bateman) and Annie (Rachel McAdams) are a highly competitive power couple who met at pub trivia and have since made game night a central part of their lives. As it turns out, Max’s competitive streak finds its origin in his relationship with his brother Brooks (Kyle Chandler), a swaggering venture capitalist who undermines Max every chance he gets. When Brooks returns to town on business, he also decides to host a game night to end all game nights for the crew: Max, Annie, dopey bro Ryan (Billy Magnusson), his date Sarah (Sharon Horgan) and married teenage sweethearts Kevin (Lamorne Morris) and Michelle (Kylie Bunbury). The evening takes a turn for the surreal early on when Brooks is kidnapped by two masked men, a stunt that the others immediately assume to be part of the show. As they continue trying to win the game, however, they discover that Brooks may actually be in real trouble.

There’s nothing more futile than trying to explain why something is funny, but here goes. Game Night is rather generically plotted, a sort of flattened take on David Fincher’s The Game where the characters have seen and presumably enjoyed The Game. (It’s never referred to on-screen, but it has that kind of soft-meta “people in a zombie movie know about zombies” angle.) It is pointedly not a movie where everyone yells at full volume about how ridiculous the situations are, and it isn’t a movie where people accidentally take drugs (or purposely take drugs, but end up taking too much/the wrong kind) and have wild misadventures with wildly strobing lights.

Let me use a scene to illustrate what is pure and good about Game Night. Bateman has just been shot in the arm by his wife, who was waving around a gun she assumed was a fake. They go to a drugstore and purchase the necessities to remove a bullet: pliers, a sewing kit, a plastic hamburger chew-toy for Bateman to bite on. In another movie, one of two things would’ve happened: McAdams would have scored some morphine or horse tranquilizers or some shit and Bateman would have spent the whole scene zonked out, thinking that his wife is actually Larry Bird in a lobster costume, or the “surgery” would have gone awry, spraying blood into everyone’s face while Bateman yells “WHY ARE YOU DOING THIS TO MY ARM, OH THERE’S SO MUCH BLOOD, LOOK AT ALL THIS BLOOD!” Neither of those things happen. Instead, the film unfolds with a quasi-naturalistic comedic patter between the two, culminating in some mutually inspired dry heaving.

Don’t get me wrong — this is not exactly high art. It’s mostly predictable, mostly safe mainstream comedy filmmaking. There’s always some sort of underlying psychological issue that is magically resolved by the trials and tribulations at hand (this time it’s Max’s reticence at having children); there’s always a respected actor creeping it up in the margins (this time it’s Jesse Plemons as Max and Annie’s awkward recently divorced cop neighbour; though Plemons is very game, his character sometimes feels like a deus ex creepazoid device).

But more important than all that, Game Night is genuinely funny. Its supporting cast features very little of the upstaging that sometimes defines a similar ensemble, with everyone getting their fair share of jokes without some of the sweatier aspects of that kind of role. It even has a couple of surprisingly good action sequences! It may seem like damning with faint praise, but Game Night is much better and much funnier than it has any right to be. If indeed mainstream studio comedies are three-chord pop songs, this one’s a banger. ■