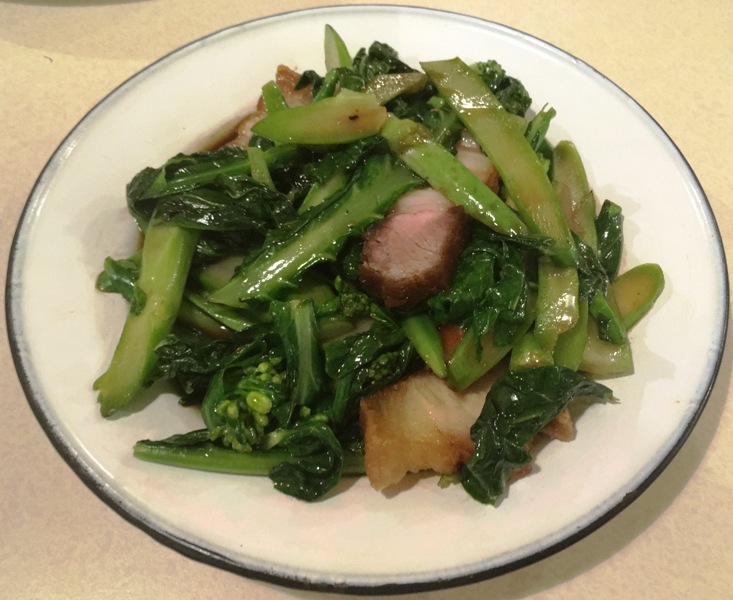 Maybe it’s a little too early to call it, but 2018 is shaping up to be a year of great casual eateries for Montreal. There’s much to be said and enjoyed from the loftier extravagance of this city’s culinary household names and tasting menus with wine pairings, but sometimes you just want the simple things: a sandwich, a salad, a mound of noodles.

I never got the chance to order from Jesse Mulder’s first Thai food operation Chak Wow. I seemed to be always out of their delivery zone of Little Italy and Mile End, but I’d heard about this place before: This guy was whipping up dishes he’d culled from cooking in Thai home kitchens and restaurants, and what he served was so exceedingly popular that in-the-know fans would recommend you order a day in advance to make sure you were taken care of.

Flash forward almost five years, and Mulder transformed that delivery-only service into the brick-and-mortar Épicerie Pumpui in Little Italy. I could see that the fanfare for Mulder’s menus hadn’t lost momentum in the slightest, so It was time to visit.

Styled after the curry shop-grocer set-ups that are common in Thailand, Pumpui is a small space where you’ll grab a tray and walk past a short aisle of curated Thai goods before arriving at the canteen. The majority of the menu items sit in open hotel pans, namely the various green, red and yellow curries that dominate potential selections. These are coupled with papaya salad, stir-fried morning glory and fried chicken, plus a few beverages. Small menu, small place: Pumpui hosts two booths that comfortably fit four each, plus standing room for around 10 at counters that line the front windows. Grab a seat (or stand) as you tuck in, mulling over the 1980s Thai ephemera on the walls.

Since Bighi showed up last year, I’m enjoying this slight snowballing of curry houses we’ve got going. The more the merrier — they’re snug places to enjoy a wholesome dish you’ll spoon over fresh rice. What’s not to like? However, if you’re not one for spicy food, you’ll likely be hard-pressed to find a lot of dishes to enjoy here. Hell, Mulder’s restaurant even has extra chili oils and dressings on the side if you want to really feel something burn. There are a few choices made-to-order that could be dialled down, but really, that would cut away the potential for a well-rounded meal. Honestly? Don’t be that person who walks into a fucking curry house, looks at the fiery oils floating on the surface of a brimming pan of curry and ask, “Is there anything that isn’t spicy?”

I brought a friend to pack away what I thought would be a good trek across the menu, starting with their papaya salad ($4). Don’t expect a zesty start with this app, as Mulder’s preparation turns the dial on the heat to a fair 5 out of 10. It’s not expected when looking at its mellow-toned mix of shavings, bean sprouts, peanuts, green beans and few shrimp for good measure. Given the canteen style of the place, this small bowl must have been pulled from prep that had been sitting out for a bit too long, as some bites yielded more mush than crunch, but it was tasty nonetheless.

This was followed by fried chicken ($8 for three pieces). I was looking forward to this one, as the Thai style favours rice flour in its batter, making for a thin but crispy casing, but it was a letdown. High hopes for this bird topped with fried shallots and a sweet chili sauce were met with one satisfying drumstick, crunchy on the outside and juicy on the inside, but was followed by thigh pieces so tough they tested our teeth. While looking evenly cooked on the plate, those last two morsels were deceivingly tough and hardly edible. More on that later.

Interested in the prospect of stir-fried morning glory, I tried ordering it but found out that they’d run out. Pumpui offered a supplement of Chinese broccoli instead ($10). For an extra couple of bucks they’d add pork belly, so that settled it for me. Now I’m not sure if it was the broccoli that threw off the kitchen when making this to order, but I wonder if the original ingredients would’ve fared better: The greens themselves were well-blanched, but I found the two small cuts of belly to be a bit chintzy. What’s more, its soupy sauce was way too heavy on the soy, a saltiness only offset by spoonfuls of rice. Was this the Chak Wow I’d heard so much about? I was getting discouraged.

It takes a lot for a restaurant to miss the mark on your first few dishes but cause a case of amnesia with a good follow-up. Mulder did just that: I’d ordered up the special for the evening, a green curry with thin slices of beef ($19.50). Rather than leaning towards the sweet side of what green curry can be, this was an aromatic and savoury bowl deep in the flavours of Thai basil, packing a spicy punch from the whole chilies found swimming alongside tender, medium-rare cuts. My friend and I made short work of it all, and I’ve been thinking about it since. 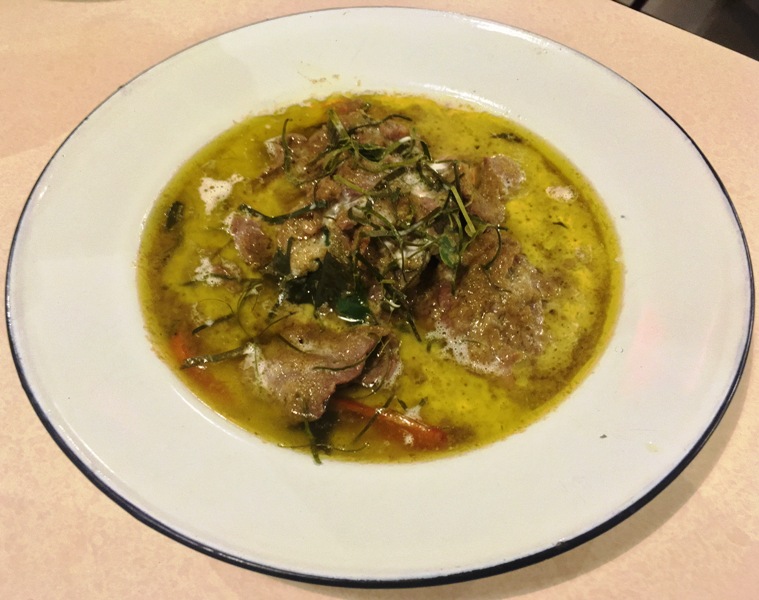 Curry is the name of the game here, and that last dish left me wanting. I ended up coming back a couple weeks later during lunch hours for their menu staple of chicken and potatoes in yellow curry, and that too was another satisfying hit, a dish rich in spice and turmeric. What’s more, I was happy to find out that my previous visit’s fried chicken was a fluke, as an order of a single piece (albeit another drumstick) was as good as my last one.

While I’ve warned of the spice, Pumpui is by no means unmanageable. The degree of heat in the dishes induces that pain-pleasure euphoria you love to hate. Forget the connotations of the colder seasons requiring a spicy meal, and come here year-round for damn fine curry. ■