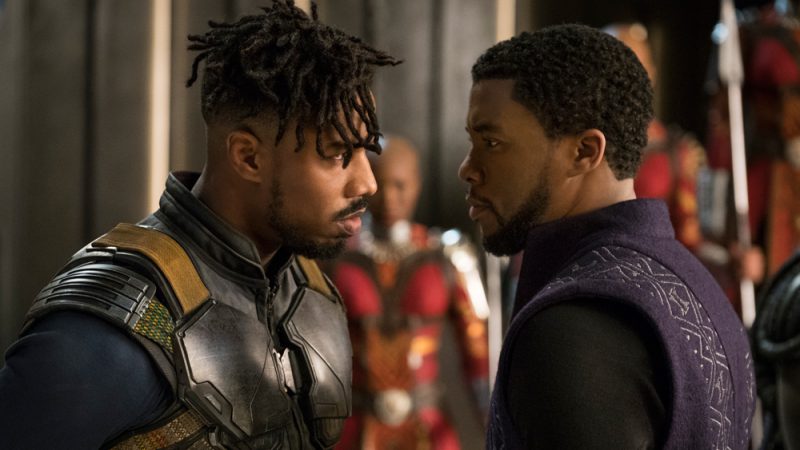 Michael B. Jordan and Chadwick Boseman in Black Panther

At this point, every single Marvel movie comes with some pre-release buzz. Each of them is touted as being the one that breaks the mold. Precisely none of them have actually done that in a major way, but even the most pigheaded fanboy out there has to admit that when this kind of stuff came out about Black Panther, it was hard to deny. Black Panther is the only Marvel movie — nay, only superhero movie — to have a predominantly black cast and to be written and directed by black filmmakers. If nothing else, it looks different and feels different from any other Marvel movie in the most obviously superficial ways.

T’Challa (Chadwick Boseman) has become the king of the Republic of Wakanda after the death of his father in Captain America: Civil War. Hiding under the auspices of a Third World country, Wakanda is actually the most developed nation in the world — a technologically and culturally thriving Utopia that has large supplies of vibranium, a super-powerful metal that is the basis for most of Wakanda’s advanced technology. Wakanda nevertheless experiences unrest when its leader dies, and it’s during this trying time that South African smuggler and overall scumbag Ulysses Klaue (Andy Serkis) and his acolyte Warmonger (Michael B. Jordan) descend on Wakanda. T’Challa teams up with the Dora Milaje (an all-female special ops platoon led by Okoye, played Danai Gurira), his tech-wiz sister Shuri (Leticia Wright), CIA agent Everett Ross (Martin Freeman) and his former lover Nakia (Lupita Nyong’o) to stop the threat on Wakanda.

Crucially, Black Panther is not an origin story. That stuff happened in Civil War and, while some may have seen that as short-shrifting the hero at the time, it really opens things up for the feature film. Coogler spends a refreshingly small piece of the film laying out the land. Granted, Wakanda has about the same problems as Heimdall what with its complicated mythology and plethora of rare metal, but it’s more propulsive and less hamster-wheel-oriented than some of these other Marvel movies. It also allows for the film to do away with the fish-out-of-water shit that plagues every new hero in the franchise. T’Challa knows how his suit works and he spends most of the movie in his home country, so the humour has to come from something other than his accidental destruction of a thing or his bemusement at cultural customs that aren’t his.

In fact, the world of Wakanda itself proves to be one of the richer elements that Black Panther brings to the table. A sort of mishmash of traditional African cultures given an Afrofuturist bent, it’s so far removed from the worlds we associate with superhero movies that it almost singlehandedly makes everything that’s rote and repetitive about the story Black Panther tells feel new again. It goes from the music to the bright costumes to the sillier flights of fancy — this is absolutely, undoubtedly the only movie in which you will see Daniel Kaluuya from Get Out ride an armor-clad rhinoceros. The world of Black Panther is fully realized in a way that even the more outlandish and trippy Marvel movies never were.

That having been said, I’m not sure what it is about me that puts my expectations so sky-high. Black Panther is as good as a Marvel movie has ever been, but it remains, at heart, a Marvel movie. What Ryan Coogler does well in Black Panther, he does exceedingly well — what he can’t fully do is shake the inevitable constraints that come with the genre. Structurally, it’s not terribly different; the action scenes never really rise above being serviceable (although Black Panther has surprisingly little filler action — three setpieces in the entire thing!) and although it finds in Killmonger just about the most empathetic and multi-dimensional villain ever to grace the MCU, it’s still more or less a movie about responsibility and making the right choices and what devotion means and all of the kind of stuff that essentially keeps coming up time and time again in these films.

What Black Panther really puts into focus is the aim of the superhero genre. I’ve spent so much time railing against the repetitive sameness of these films that when one comes along that rather explicitly presents something different, the first thing I do is go and find the ways in which it’s the same. The fundamental problem is that I first saw superhero movies as an offshoot of an existing genre, as a form of sci-fi or action film with superheroes at the centre. That’s not at all the case — superhero movies are very rigidly defined, and the entire point of Black Panther is that these movies can follow a formula without all being exactly the same. I don’t think that Black Panther transcends the trappings and failings of the genre — it embraces them and shows that you can still work within those parameters and deliver something different. ■