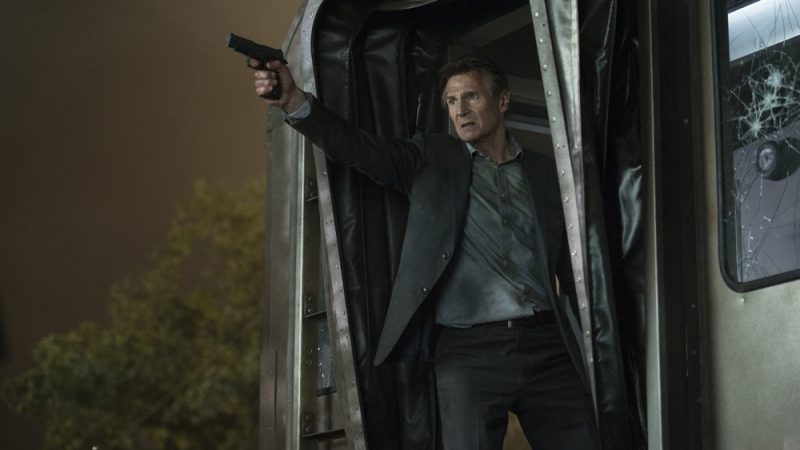 Liam Neeson in The Commuter

I have to let you in on a little secret: if I’m home alone, have no work hanging over my head, all the shows I’m currently watching are caught up, there’s nothing I have to watch for work and no Okjas or other zeitgeist-y things I feel I have to watch, I’m gonna turn towards Liam Neeson… or Nicolas Cage. There’s something undeniably satisfying in the repetitive, competent sameness of their star vehicles in which their families are almost always in peril and vengeance is almost always a dish best served cold. I’ve seen many of these films and, while they’re relatively difficult to tell apart (the Cage ones are generally cheaper and more likely to be shot in New Orleans or Shreveport), there’s something comforting about their predictability.

As time goes on, however, I’m starting to wonder: Neeson can’t possibly say yes to every script that comes his way, right? If he makes, say, six movies in a year, they can’t be the only six scripts that were sent his way. It’s hard to look at The Commuter (Neeson’s fourth collaboration with Jaume Collet-Serra since 2011) and see what sets it apart from… well, nearly everything. There comes a point where comfort turns into boredom and, while Neeson has apparently not reached that point yet, I’m approaching it.

Neeson stars as Michael McCauley, a former NYPD cop turned insurance salesman. He’s stretched pretty thin between his two mortgages and the fact that his son is about to head off to college; he’s in no position to be let go from his job, which is actually exactly what happens. Headed back to his upstate home on the commuter train he takes every day, he’s approached by a mysterious woman (Vera Farmiga) who presents him with a hypothetical equation: what if he was asked to do something minor, inconsequential even, in exchange for some cold hard cash? What if he was told that someone on the train didn’t belong and he had to find them for this mysterious woman in exchange for $100,000? What if this wasn’t hypothetical at all and, by speaking to this mysterious woman, Michael found himself between a rock and a hard place with his family in peril, one that he can only extricate himself from by doing exactly what she says?

The Commuter’s initial premise is Hitchcockian in a broad sense, but the resulting film is more of a tepid action movie with a heavy problem-solving element than an actual thriller. Of all the filmmakers that Neeson makes these types of films with, Collet-Serra is the flashiest; consequently, The Commuter is less about slow-burn suspense and more about how to make an old man pacing up and down a commuter train into a cracking action-adventure. No matter how hard he whips the camera around each train compartment, no matter how he swoops over benches and around passengers’ heads, Collet-Serra is still working with unnecessarily convoluted airport-novel material. As Neeson narrows down the culprit in a And Then There Were None-lite scenario, the film grows increasingly convoluted, eventually making way for a police corruption/conspiracy theory subplot that unsurprisingly works overtime to put Neeson’s family into jeopardy.

What’s most tiresome about The Commuter isn’t actually how derivative and familiar it is. As I mentioned before, there’s a certain comfort to the Groundhog Day-like notion of Neeson playing a weary ex-cop whose family is put in danger on various transportations methods. It’s that The Commuter jumps through so many fucking hoops to eventually come full circle, carefully setting up all this shit about the financial crisis when it’s clear what it really, really wants is to show Liam Neeson wailing on a dude with an electric guitar (which does happen, by the way, and owns just as much as it sounds). The Commuter seems torn between its desire to be cathartic old-man action junk and its desire to make said junk be about something, and the road between throwing a dude off a train and linking his death to the evils of capitalism is a long and unpaved one.

There are certainly some good moments in The Commuter — the aforementioned electric-guitar-based mano-a-mano fight scene is a highlight, but everything involving Farmiga’s character also belongs in a much better movie. She’s a MacGuffin of a villain, a mysterious threat who swoops in and immediately swoops out, hanging over Neeson’s character like a spectre. While I don’t necessarily think that Farmiga and Neeson duking it out with chains on top of the train Emperor of the North-style is necessarily what this movie needs, Farmiga is certainly the calibre of villain the movie needs but keeps at bay for 90 per cent of the film’s running time.

All old-man revenge movies play it safe to some degree, even if they range from John Wick 2’s gloopy psychedelics to Bruce Willis struggling to stay asleep in an airplane hangar in Belgrade. The Commuter is only different to the extent that it’s not explicitly about revenge; otherwise, it plays it by the numbers. Make no mistake — Collet-Serra is about as talented a director working in the genre and Neeson the most solidly dependable lead of that same genre, but not a single second of The Commuter feels anything but rote. ■

The Commuter opens in theatres on Friday, Jan 12. Watch the trailer here: