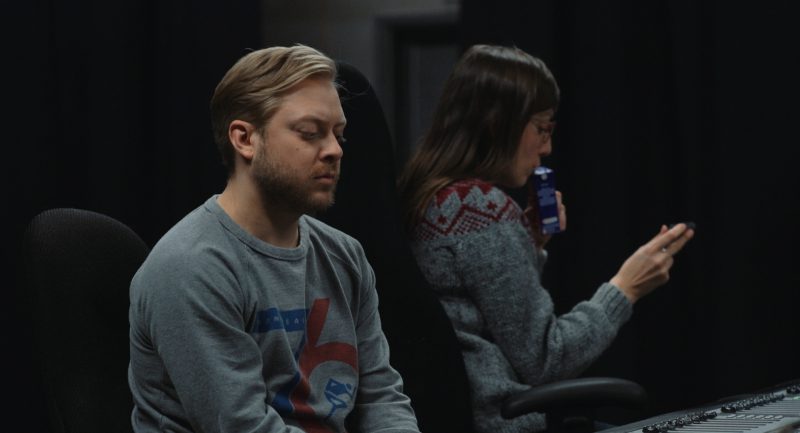 In 2014, actor and budding filmmaker Guillaume Lambert had a chance meeting with iconic French actor Denis Lavant (best known for his collaborations with Leos Carax). Without much of an idea in mind, he nevertheless convinced Lavant to film a scene with him. Shot with no money and no real purpose at the time, the scene languished in Lambert’s archives as his career as an actor (on the hit sketch show Like-moi, the viral short film Toutes des connes and the webseries he scripted, L’âge adulte) and writer took off. Now, three years later, this scene forms the basis of Lambert’s feature debut, Les scènes fortuites.

“It’s a bit of a criticism of the industry,” says Lambert. “The guy thinks that, because he’s got a star in his movie, he’ll get into some festivals. But his movie has no plot.”

Lambert plays Damien Nadeau-Daneau, an aimless wannabe filmmaker who finds himself adrift with an unfinished film starring Denis Lavant. Unable to convince anyone to distribute it, he finds a job writing voice-over for an America’s Funniest Home Videos knockoff (poetic justice for Damien, who was the star of a controversial prank show as a child) and living with his sister (Valérie Cadieux), a tempestuous flight attendant who’s always on her way out the door. Convinced that his future lies in this unfinished movie, Damien finds himself rudderless.

“I don’t have the pretension to say that I’m making a movie about my generation,” says Lambert. “I don’t think the movie has a documentarian’s approach to current issues, but I took my point of view and used it to make a very intimate film. The character’s 33, but he could be 25 or 62.”

Made with a very small budget of $150,000, Les scènes fortuites is about as close to an American indie as you’re likely to see come out of Quebec. For inspiration, Lambert drew on those same indie films of the late ’90s and early 2000s.

“Someone pointed out that my character goes to the doctor’s a lot, which wouldn’t be possible in the States,” says Lambert. “That’s totally true, and that in itself makes it a Québécois movie. I asked myself that question, because I was very much inspired by the American indie scene — the mumblecore movement, Noah Baumbach and all that. I wanted to be as realistic as possible, so that’s why we use my own personal archives in the film. That’s why the actors have very little make-up on. I hired almost exclusively comedic actors but then didn’t give them outwardly comedic things to do. I wanted people to wonder why they recognized the narrator’s voice — because it’s François Pérusse, but he isn’t being funny. The characters have no artifice in my movie. There’s a specific tone, but no artifice. I figured, if we’re going to make a movie with so little money, I’ll make the DIY nature of it part of the tone.”

“The budget became a very strong creative constraint. This ‘handmade’ feel followed us into post-production. I had used Chet Baker as a reference for the score at first; obviously, we couldn’t afford it. My sound guy Casey Brown had also done Game of Death with Matt R. Sherman, and I thought, ‘Those two guys know what they’re doing, they can fix my film.’ I had barely recorded any room tone, I had barely recorded anything on set, and they made them all from scratch. All the sound in the film is original. Nothing was bought online. Even the scene where a lady is singing in the metro was something that Casey had in his archives. But to finish on Chet Baker, Casey recorded a jazz band improvisation for two hours and we found what we needed in there. The film’s soundtrack wound up being taken completely from that, which I hadn’t planned for at all. It fit well with the film’s melancholia — a kind of When Harry Met Sally, New York in the fall type of thing.”

Les scènes fortuites is Lambert’s debut feature, but he has made a couple of shorts in the past, not to mention the shows he’s written on without necessarily directing. This time, he said the feature’s limited budget actually allowed him more freedom. He points to several scenes in the film where his characters walks along an empty street and, when he encounters a single person, they inevitably bump into him.

“Usually, they always cut out those scenes,” says Lambert. “The logic being that we don’t have a permit to shoot outside, the actor has to get paid and there’s no dialogue. They always cut them! But this time, (laughs) I pulled off every single one of my fantasies. I wanted to put Monia Chokri and Éric Bernier in a scene together — I did it. I wanted François Pérusse to do a serious voiceover — I did it. I wanted Valérie Cadieux, my faithful companion since theatre school, to play my sister — I did it. I wanted a bunch of brown-haired sisters like in Punch-Drunk Love — I did it. There are also a lot of nods to my love of cinema from roughly 1998 to 2002 — the pre-iPhone era.”

Another fantasy (albeit a somewhat accidental one)? Giving an acting role to the venerable Bernie Gurberg, proprietor of the Dollar Cinema and mayoral hopeful in 2017. Gurberg plays — who else — the proprietor of a cinema.

“There are no actors like that in the Union des artistes book,” says Lambert. “It’s as if the Terminator was 80 years old and bought himself a movie theatre. He’s so much a part of the image of that place; he’s always dressed the same. (…) It’s my kind of Coen approach. Originally, we were just using the cinema as a location, but then I asked Bernie if I could film him placing his popcorn bags and flipping his hotdogs and so on. Then I asked him if we could shoot a dialogue scene with him and he just goes, ‘I should destroy this after?’ exactly like the Terminator. (laughs)” ■

Les scènes fortuites opens in theatres on Friday, Jan. 26, at Cinéma Beaubien (2396 Beaubien E.). A preview screening with Lambert in attendance is happening tonight, Thursday, Jan. 25 at 9 p.m. Guillaume Lambert will also be present for a Q&A on Saturday, Jan 27 at 7 p.m. Watch the trailer here: